A look at the life J.M.W. Turner

‘Mr. Turner’ looks at the contradictions and genius of the brilliant painter J.M.W. Turner

A look at the life J.M.W. Turner 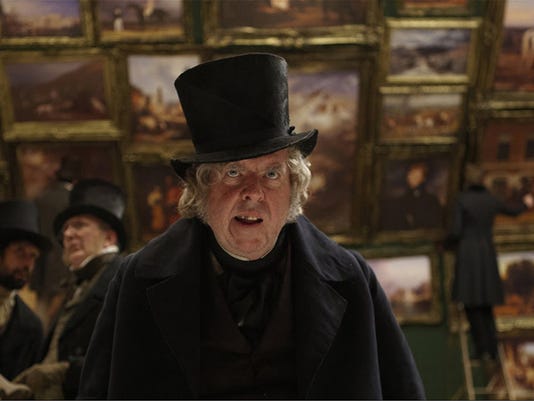 How to praise “Mr. Turner?”

In every way possible.

As befits the story of a great painter, the film itself seems painted on to the screen at times, with great sun and seascapes, long looks at the countryside and strolls through early 19th century England.

Not that all is pastoral; far from it. Capturing these scenes while barreling through them is the British artist J.M.W. Turner (Timothy Spall in the role of a lifetime). Hunched, heavy and given to snorts and grunts, Turner initially appears to be a genius caught in the body of a beast.

But as writer-director Mike Leigh (“Topsy-Turvy,” “Vera Drake,” “Happy-Go-Lucky”) moves through the film, Turner picks up shades: he’s full of bluster but tender on occasion, a student of light and lover of song, dismissive of too many but suddenly generous. This is a portrait of an artist as constant contradiction, as a force of nature and vessel of inspiration.

Leigh introduces Turner, the son of a barber and mental patient, as an already successful painter, living with his aged father (Paul Jesson) and a slavishly devoted housekeeper (Dorothy Atkinson) in London. From that base, Leigh skips this place and that: Turner at a country estate, Turner gathering with other painters, Turner having himself lashed to the mast of a ship during a storm so he can absorb the power of nature.

The man can be a lout, no question. He all but ignores two grown daughters and a grandchild and uses his housekeeper for more than cleaning house. But after traveling incognito to a seaside town, he falls in love with a landlady, the humble Sophia Booth (Marion Bailey), and his vulnerability surfaces.

Leigh also follows the progress of Turner’s art, which moves from grandiose, if more traditional, scenes of land and sea, storm and bright suns, to more abstract visions. As his paintings begin opening the doors to modern art, he takes on the scorn of popular critics. He’s simply ahead of his time.

At 150 minutes, “Mr. Turner” is a serious film indeed, an epic without battles or disasters, focusing instead on one fascinating character. The film is nominated for four Academy Awards — cinematography, production design, costume design and original score — but the fact that Spall and Leigh were not nominated is ludicrous. They are, perhaps, too good for the Academy.

For in “Mr. Turner” lies the heart of man — troubled by circumstance, bursting with ambition, basking in the light and aching for acceptance. This is an extraordinary film.

“Mr. Turner” (R ) Timothy Spall is astounding in Mike Leigh’s film about the 19th century British artist J.M.W. Turner, a bundle of contradictions who opened the doors for modern art. An extraordinary film. (150 minutes) GRADE: A