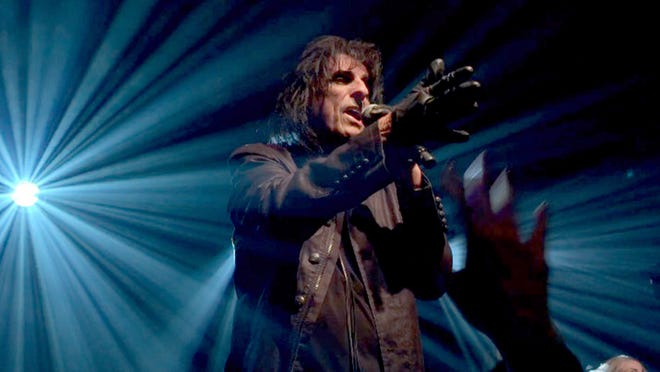 When John Varvatos was planning for the private opening party of his downtown Detroit store, to headline he called on one of the h ardest-rocking Detroiters to come out of the late '60s/early '70s — Alice Cooper.

Varvatos' store, a 4,600-square-foot, black-iron space carved out of the once-frumpy Wright-Kay Building on Woodward at John R, has been open for a month. But he waited for Cooper's availability to schedule the VIP party held last week.

Cooper meant a lot to the clothier, who grew up in Allen Park, part of a large Greek-American family. Varvatos fell in love with the rocker's third album, "Love it to Death." Music, especially Detroit music, was transformative for Varvatos.

"I grew up in this little house with seven people, and it was the one thing that transcended everything, that took you somewhere else," said Varvatos, 59. He didn't plan on going into fashion, but a job at Ralph Lauren locally got him to New York, where he became a designer.

Varvatos and Cooper, now friends, were talking last Thursday with a reporter at Cliff Bell's before filming a video for the store. Against the burnished wood backdrop of the vintage Detroit speakeasy, near a photo of the Cliff Bell ("He looks totally illegal," Cooper said), they discussed their friendship, the soulful underpinnings of Detroit music, and the city's comeback.

Cooper, 67, grew up on Detroit's east side as Vincent Furnier, a rabid Tigers-Lions-Red Wings fan (to this day), movie-crazy (still), who would regularly see three features at the Eastown Theater for 35 cents.

At 14, he and his family moved to Phoenix to relieve his asthma, but he returned in 1969-70 to live and work here with his band. He was part of the Detroit rock generation that produced Iggy and the Stooges, the MC5 and SRC.

Cooper played the Eastown and was amazed that the movie palace where he saw "Creature from the Black Lagoon" in the 1950s had been transformed into a "rock dungeon."

Everybody looked artfully scruffy then, and Varvatos likes to talk about how the look of Detroit-Ann Arbor bands such as Iggy and the Stooges fascinated him almost as much as the music. Cooper describes it as a sort of rocker-greaser-factory hybrid.

With the eye of a future designer, Varvatos took it all in, going to shows at the Eastown and later, Bookie's.

"In Detroit, there was an edge. They were grittier. The whole black leather motorcycle jacket, ripped up jeans and that wasn't happening anywhere else at the time," Varvatos said. "So when you see the photos of the Stooges from the 'Funhouse' album, that look was not anywhere else."

That look is derived from what Detroiters did, Cooper points out: make things in factories, ride motorcycles, play music.

"Even Alice, wearing the most incredibly strange multisexual kind of clothes, in my heart was still a greaser," said Cooper, in his charming way of referring to his stage persona in the third person. "It was just in the DNA. Cars, rock and roll and Detroit.

"When I was living in Los Angeles and it was (groups such as) the Doors and Love, part of me was going 'Power chord! Let's not get into this groovy, bossa nova rock.' That's why we got thrown out of L.A., and the only place that would accept us was Detroit. We came back to where we were most comfortable, and where the music was most comfortable."

Cooper was playing a local pop festival, most likely in Southfield, when he got his first look at the MC5, and Iggy and the Stooges.

"We got there and I saw the MC5 — wow! Show band! Then I see Iggy and the Stooges and I thought 'Ohhh-kay. I don't want to go on after that guy.' We didn't go on after that guy, but we were the missing finger in the glove. As soon as we went onstage and played, everybody loved it. Then they found out I was from Detroit. Then I was the prodigal son."

Cooper hasn't lost his edge, Varvatos says. The clothier tells about seeing a much-revered classic rock artist recently who played well, but "there was nothing dangerous there."

But on Cooper's last tour, with Motley Crue: "I had the same feeling as when I saw you back then," the designer says. And it's not because Alice is hanged onstage.

"I keep saying this about bands, why are young bands afraid to be rock bands?" Cooper says, warming up to a rant. " I don't care about oil. I don't care about your political views. Sing about your girlfriend! That's what every great rock band ever sung about about. It's an endless supply of information." This leads to a side rant about Mumford & Sons, whom he scoffs are "folk," although he admits they rocked hard on a recent "Saturday Night Live."

What is it about Detroit rock, that sets it apart from Cleveland or Chicago or New York? Soul music and Motown was in the water here, for one thing, and the rock bands were listening intently. Cooper freely admits to copping that sound via blue-eyed soul bands such as Mitch Ryder and the Detroit Wheels.

"If you were from Detroit, Motown seeped in," Cooper said. "And you could take any one of those (Motown) songs and rock it out. 'Tears of A Clown'? You could rock that out.

And by the way: "Smokey (Robinson) would look great in your clothes," Cooper tells Varvatos.

It may surprise some that Cooper is such a dedicated follower of fashion and world-class shopper. Varvatos charges that he left for Europe with four pieces of luggage (for him, wife Sheryl and daughter Calico) but came back with 14.

At Cliff Bell's, Cooper's daytime ensemble was a short, black Varvatos jacket he bought that morning. It looked as if it was made in the 1970s.

"Exactly!" Cooper said excitedly. "It's got a definite British cut to it. I put it on yesterday and it's as if it was made for me."

He bought a similar coat in a 3/4 length.

"I'll wear that onstage tonight," he promised. "It almost has a Nehru look to it, but it's pirate."

Music photos and artifacts take up most of the walls of Varvatos' Woodward Avenue store, including records, vintage rock photographs and framed covers of Detroit's Creem Magazine, which was launching just as Cooper, the MC5 and Stooges were.

"It's like we grew up together, we grew up with Iggy, the Amboy Dukes, SRC, all those bands, MC5. We were all local bands playing so we could make enough money to keep our house. And Creem was doing the same thing," Cooper said.

"All the people working at that magazine, it was all about passion," Varvatos added.

Cooper nods. "I used to tell people, New York's got a scene, L.A. has a scene, San Francisco's got a scene, but none of them are real rock scenes," he said. "The Midwest is where hard rock is, and Detroit was the heart of that. Seals & Crofts (Varvatos can't help it, he starts laughing) could not play in Detroit, because they'd get killed. You couldn't be soft rock in Detroit."

Beyond the look, what set Detroit bands apart was attitude, Cooper said, as Varvatos nodded.

"Our attitude was always on the defense. We were used to being the underdogs. We always came on angry. That's, to this day, the way it is."

Varvatos looks serious. "There was a time, not even that long ago, when you'd look across the city and say, 'It's not gonna happen.' Now you're saying 'It's happening, and it's happening quickly.'

Perhaps Detroit excels, just as the city's musicians do, when the world has us down for the count?

"It's better to come from the floor," Cooper said. "Get knocked down twice, and get up and win."