It's heating up in hip Hazel Park 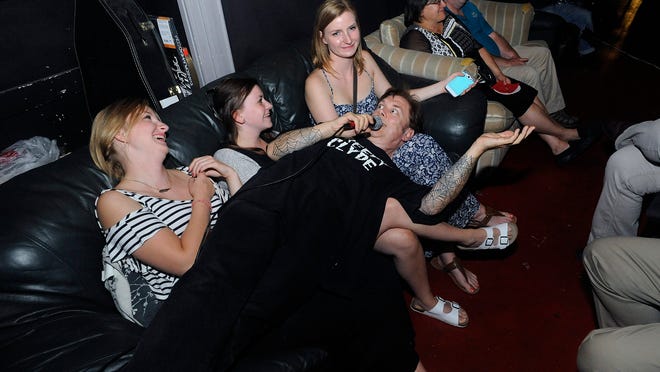 With affordable rents, plenty of available storefronts, a popular chef coming to town and a brewery to follow, Hazel Park is getting buzz for having the potential to be Metro Detroit’s next hot neighborhood.

Spanning nearly three square miles, the Oakland County border suburb also has a thriving art scene, part of which will be showcased this weekend during the Hazel Park Art Fair at Green Acres Park.

“To someone who’s never been to the Hazel Park Art Fair, I’d tell them to expect the best art fair they remember with a strong sense of community, and a common joy for both art and music,” says event organizer Julie Fournier, a full-time artist who lives in Hazel Park.

“Hazel Park is not pretentious and it isn’t trying to be hip,” she says. “It’s similar to how Royal Oak and Ferndale were before they filled up and the rents got high.”

Artist and musician Steven Gamburd agrees. He’s one of the people who organize events at the Phoenix Cafe, a music and art space on John R just south of 10 Mile. It’s been going since 2009.

He says Hazel Park is definitely “on the rise” but there is plenty more to be done.

“The Hazel Park Arts Council was recently formed and has plans to continue to improve the overall existence and appearance of arts in the city,” he says.

“The overhead is low for a restaurant, retail establishment, cafe or art gallery in comparison to other cities. Housing is also reasonably affordable, which would bring in more artists, musicians and creative types.”

Leah Elizabeth Dunstan is one of those creative types. She, her husband and their young son have been renting in Hazel Park for four years. She says she likes that the area is a “family oriented neighborhood,” but she can also practice with her eclectic pop/folk band Eleanora at her house without complaints.

“The community embraces our band,” says the singer and multi-instrumentalist. “As a mom I love all the local parks for my 3-year-old son to play at, as well as the big backyards. You can’t find that easily in Ferndale in our price range.”

Driving down John R between Eight Mile and 10 Mile, it’s obvious by the number of empty properties that there’s plenty of room for new businesses.

Already though, there are some cool things peppered in between pawn shops and liquor stores on Hazel Park’s stretch of John R. Besides the Phoenix Cafe, there’s longstanding head shop B.D.T. and the Bicycle Doctors, which is located down the street from the future home of Cellarmen’s brewery, cidery and meadery.

A brewery next to a bike shop? What more of a defining characteristic do you need for a cool neighborhood?

Chef James Rigato could have opened a restaurant anywhere in Michigan.

He’s gained a following because of his success at his White Lake restaurant The Root. He was also a contestant on Bravo’s “Top Chef” and last spring was named People’s Best New Chef in the Great Lakes by Food and Wine magazine.

The 30-year-old chef and cycling enthusiast chose Hazel Park as the home of his new venture, Mabel Gray.

“The affordability, the existing canvas is already so unique,” says Rigato, who wouldn’t call the city a “blank canvas” because of the longstanding businesses like Loui’s Pizza, Pi’s Thai Cuisine and the Bicycle Doctors bike shop.

The city has a good amount of commercial property available, particularly on the main drag of John R between Eight and 10 Mile roads. Realtor John Kurczak says one problem with moving properties on that strip is the lack of parking.

“It’s really difficult to serve those spots because you need viable parking,” he said, adding that people want to be able to park in front of businesses or have access to a parking structure.

Kurczak represents Two Guys from Italy, a carry-out pizza business that is for sale (business only, not the building) for $199,900. Next to the Phoenix Cafe, a former coney island is available for rent for around $1,300 a month.

Rigato says Mabel Gray will have a full bar and an often-rotating menu, and he’ll be there cooking every day. He says he had an easy time dealing with city officials when he was looking for a space for the new restaurant, which could open as early as next month on John R just north of Nine Mile.

“I cold-called the city and they called me back an hour later. (City workers) are active in the re-birthing of their city. I needed the water turned off and I had to call the city to get it turned back on. It took four minutes. If you’re doing that in some cities, it’s like a week.”

Rigato says that people who refer to Hazel Park as run down are stereotyping.

“I hear people say it’s ‘Hazeltucky’ and I don’t know, people who usually say that are taught that. This is just normal Metro Detroiters living, working and eating.”

Loui’s Pizza: Arguably the best pizza in the state, Loui’s has been around for decades and is known for deep dish pies, hearty salads and Italian specialties. The interior is perfectly old-school with empty chianti bottles decorating the spacious family-style restaurant. 23141 Dequindre, Hazel Park. (248) 547-1711.

Bray’s Hamburgers: It’s the only slider joint around town with a giant donkey holding a hamburger on the roof. The signature item is the Belly Buster (half pound burger with two cheeses, grilled onions, lettuce, tomato and 1000 Island dressing), but belly up to the ’50s-style counter and you can also order a coney dog (99 cents on Tuesdays), patty melt, fries, chili, chili fries and, as the sign reads, “breakfast anytime.” Third shifters and barflies take note: Bray’s is open 24 hours. 22941 Dequindre. (248) 542-8878.

The Bicycle Doctor: Catering to all styles of riders, this bike shop has been around since the late 1980s, previously known as Continental Bike Shop. They sell bikes and accessories and specialize in services and repairs. 24436 John R. (248) 584-3060.

B.D.T. Smoke Shop: Considered to be one of the best head shops in the area, B.D.T. sells smoking and vaping accessories. There are other locations around Metro Detroit, but the Hazel Park shop is the flagship store. 21640 John R. (248) 542-6110.

Mabel Gray: The second venture from Chef James Rigato and partner Ed Mamou of the Root Restaurant & Bar in White Lake. It may open as soon as next month with a seasonal, rotating menu and a well-thought-out drink list. 23825 John R. (248) 698-2400.

Cellarmen’s: Hazel Park’s first microbrewery, cidery and meadery (and tap room) is set to open in the next few weeks. The 12,000 square foot facility takes over where Bolyard Lumber used to be. This will be the first meadery in the state to sell mead by the can. 24310 John R. (586) 413-4206.

More than 70 artists and 18 local bands, plus beer and food