Aerosmith, *NSYNC, Britney Spears and Nelly put on the most entertaining halftime show ever 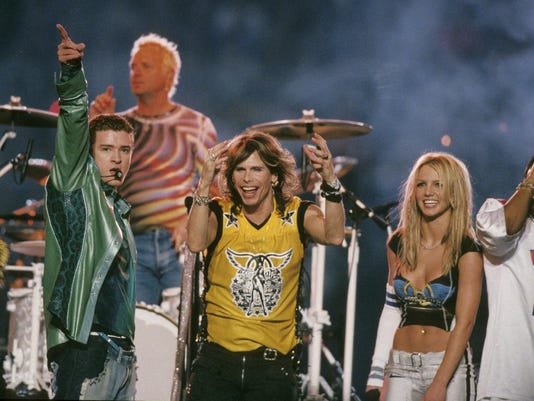 At halftime during Sunday’s Super Bowl, Coldplay will light up what has become entertainment’s premier stage.

They’ll perform for a gargantuan audience — last year’s Katy Perry halftime spectacular was seen by 118.5 million people — and Coldplay being Coldplay, they’ll surely have a few innovative production tricks up their sleeves.

What they won’t have is tube socks on their arms.

Fifteen years ago, Britney Spears made that bold fashion statement during halftime at Super Bowl XXXV, or 35 if we’re dispensing with the Roman numerals. It was a brief but lasting moment in the most fun halftime show the Super Bowl has ever produced, one that’s sheer pop might won’t soon, if ever, be matched.

Super Bowl halftimes weren’t always the extravaganzas they are now. For years they were an afterthought at best and an embarrassment at worst.

Marching bands and themed tributes were the order of the day in the Super Bowl’s early years, from Super Bowl IX’s tribute to Duke Ellington (starring Mercer Ellington and the Grambling State University marching band!) to Super Bowl XV’s Mardi Gras-themed show with Helen O’Connell and the marching band from Southern University. 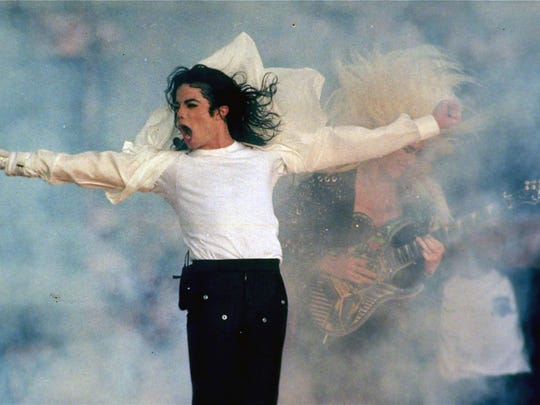 The halftime show got some modern zip and superstar power when Michael Jackson took the reins at Super Bowl XXVII in 1993, but then slipped back into shmaltz with tributes to Indiana Jones (XXIX) and the Blues Brothers (XXXI).

But in 2001, MTV was handed the keys to the castle and gave the show a modern facelift that forever changed the trajectory of the Super Bowl halftime show.

The show was dubbed “The Kings of Rock and Pop” and starred Aerosmith and *NSYNC, a pair of acts who lived up to their billing. A pre-taped intro featured Ben Stiller (as mustached halftime “coordinator” Timothy Swackhammer), Adam Sandler and Chris Rock, and the performance was rounded out by appearances from Britney Spears, Mary J. Blige and Nelly.

Round up all those performers today and it would make for a pretty good show. Back then, it was gold.

*NSYNC hit the stage first, and nearly jumped out of their shoes while doing their “Bye Bye Bye” dance, which led to them trading the stage back and forth with Aerosmith. The rockers gave flight to their smash ballad “I Don’t Wanna Miss a Thing” and “Jaded,” which was released two months prior and stands as the band’s last great single (and final song to chart in Billboard’s Top 10).

The boys in *NSYNC were outfitted with pyrotechnics shooting from their hands, while Joey Fatone was dressed, for some reason, like a glittery Broadway hobo. When they did “It’s Gonna Be Me,” Justin Timberlake was positioned about 10 feet in front of his bandmates, a sign of things soon to come. (He released his debut album a year later, and you know the rest of that story.)

The two groups entered into some “you got your chocolate in my peanut butter”-style shtick, exchanging lines on “Walk This Way,” as Aerosmith had done with Run-D.M.C. 15 years prior. Then up bubbled the cameos: Britney Spears, in football tights, a strategically torn Aerosmith T-shirt and a tube sock on her arm, wedged herself between Steven Tyler and Joe Perry and shimmied down the stage’s catwalk with Timberlake, her boyfriend at the time. (The mega-couple would break up a year later; we still weep for Stinky and Pinky.)

Mary J. Blige was ushered to center stage by three members of *NSYNC, and joined Tyler on vocal duty. Then St. Louis rapper Nelly, wearing a jersey split between the game’s two teams (the Baltimore Ravens and the New York Giants), spit a rapid fire verse from his own “E.I.” that meshed with Perry’s guitar licks surprisingly well.

It was all over in less than 11 minutes, but it made a lasting impression, capturing teen pop at its height, a classic rock act still in fighting form, an of-its-time comedy bit, celebrity cameos and, well, Nelly. (Mary J. Blige was given the least to do, but a stage with Mary J. Blige on it is still better than one without her.)

MTV returned to produce the 2004 show, which featured Kid Rock, P. Diddy, Nelly (again!) and Timberlake playing peek-a-boo with Janet Jackson’s wardrobe. Unsurprisingly, the network was never asked back, but even without the malfunction heard round the world, it was a darker, edgier and thematically heavier show, no match for the effervescent pop froth on display in 2001.

Safe, older-skewing classic rock acts then took over halftime duty, and pop acts were given the stage again in 2011 when Black Eyed Peas took over. Which now brings us to Coldplay, a huge, unabashedly earnest act with a penchant for powerful live performances that nonetheless feels like a slightly underwhelming choice.

It’s tough to matched the pizazz of Aerosmith, *NSYNC and sock-armed Britney. Sure, there have been better shows — Bruno Mars triumphed in 2014, and no one is likely to match Prince performing “Purple Rain” in the rain in 2007, but the 2001 halftime show was a one-of-a-kind blast. Coldplay has some pretty big socks to fill.