The superstar singer was as confident as ever, but the concert was over after only 85 minutes

Rihanna performs at the Tampa stop of her Anti Tour. Photographers were not permitted to shoot Thursday's concert at the Palace of Auburn Hills.(Photo: Dennis Leupold)

She opened with “Stay,” but she didn’t stay long, as Rihanna’s sold-out Anti tour stop at The Palace of Auburn Hills on Thursday night was over and done with in a brief 85 minutes.

Grant it, in those 85 minutes the pop superstar breezed through, either in whole or in part, more than two dozen songs, most of them smashes. But it was over too soon, as the singer finished up with “Kiss It Better” and offered up no encore for the capacity crowd. Folks were on their way back to their cars by quarter to 11.

Maybe expectations are another thing Rihanna is “Anti” this time around. After years of playing by other people’s rules, pumping out seven albums between 2005 and 2012, Rihanna is now firmly in control of her own career.

Earlier this year she released her eighth album “Anti,” an unconventionally uncommercial work, which along with recent albums by Kanye West and Kendrick Lamar is establishing a new artistic paradigm for superstar hip-hop that is led by art, not commerce. They are brazen works untethered to expectations of radio or single success, and all three artists seem to be saying the same thing: We’re not willing to bend, so it’s up to you to bend toward us instead.

Rihanna’s show Thursday found her the most confident and assured she has ever been as a performer, and she opened with a virtuoso four-song suite that found her rocking the Palace entirely by herself. No dancers, no backup singers, just Rihanna, who started the show by walking through the crowd to a stage in the back of the arena and powering through “Stay” and “Love the Way You Lie.”

She then boarded a walkway that was suspended from the ceiling and performed the new album’s “Woo” and “Sex With Me” while being lifted over the crowd, working the platform like a runway and striking poses all the while. 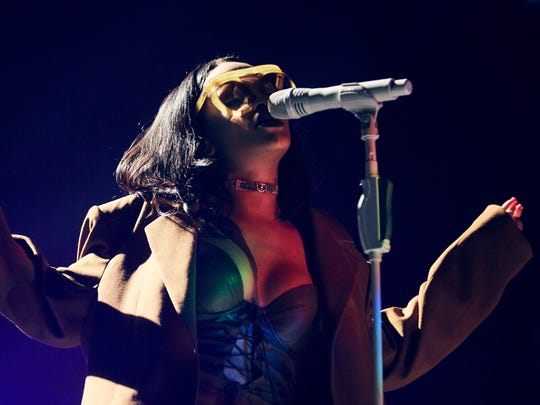 Rihanna performs at the Tampa stop of her Anti Tour. Photographers were not permitted to shoot Thursday's concert at the Palace of Auburn Hills. (Photo: Dennis Leupold)

The theme of the evening was white, with Rihanna’s stage decked out in white, the seats behind the stage covered in white and even the cameras and cameramen draped in white. The main stage, which she made her way to in time for “Cake,” was mostly bare; even her six-piece band was underneath the stage and out of sight. As she was joined by her dancers it began to look like a Kanye West fashion show, all clean lines and peculiar wardrobes, as Rihanna carried on like a boss without a care to give.

She oscillated between songs from “Anti” and snippets of her hits both a solo artist and a featured act, offering up “Live Your Life,” “Run This Town,” “All of the Lights” and “Umbrella” in one particularly vibrant stretch. When you hear those songs back-to-back (to-back, to-back), you realize the seismic impact Rihanna has had on pop music in the last decade, and there were several No. 1 hits – including “Take a Bow,” “Disturbia,” “Only Girl (in the World),” “What’s My Name,” “S&M” and “The Monster” – that didn’t even make the cut in her set. When you can afford to blow off a half-dozen No. 1s, you’re in a pretty powerful position.

Rihanna was in good spirits throughout the night, repeatedly thanking the crowd for its support and engaging with several fans in the front row. The show’s visual focus began to wane by its midsection, however, and after a kaleidoscope of psychedelic images was projected onto the clear shower curtain-like stage backdrop during the Tame Impala cover “Same Ol’ Mistakes” (a show highlight), the concert hit a bum note when soapy clumps of foam began tumbling down the backdrop during “Diamonds.” The song is about a love so elegant it shines like a diamond, but there’s nothing elegant about foam parties, which are like public wading pools. The song and visuals couldn’t have been more mismatched if a commercial for Burger King’s new grilled hot dogs ran behind her during the song.

The foam continued to gather at the back of the stage, for some reason, for the remainder of the show; perhaps it fit into the theme of white and cleanliness, or cleansing. But it was distracting, and took away from Rihanna’s impressive closing suite, which included “FourFiveSeconds,” a spirited “Love on the Brain” and the closer, “Kiss It Better.”

As she waved goodbye to the crowd there was a feeling there was more to be said, but Rihanna was finished saying her piece. She is currently riding her own wavelength and calling her own shots, and she’s as strong a performer as ever. But next time, let’s hope she’s not in such a hurry to get off the stage.