The record, a 12-inch master of Carl Sagan’s “A Glorious Dawn,” was sent into space in the Icarus Craft

Darrell Wright, left, 40, of Fenton, shakes hands with Kevin Carrico, of Royal Oak, the special projects engineer who built the Icarus Craft. Fans attended a watch party at Third Man Records in Detroit for the first phonograph record to be played in space on Saturday, July 30, 2016. Todd McInturf, The Detroit News
Fullscreen

A schematic of the Icarus craft. Todd McInturf, The Detroit News
Fullscreen

This is the Icarus Craft. Todd McInturf, The Detroit News
Fullscreen

From left: Kevin Carrico, of Royal Oak, the special projects engineer who built the Icarus Craft, talks with Alec Wilkinson, center, a writer with The New Yorker, and Jack White about the Icarus Craft. Todd McInturf, The Detroit News
Fullscreen 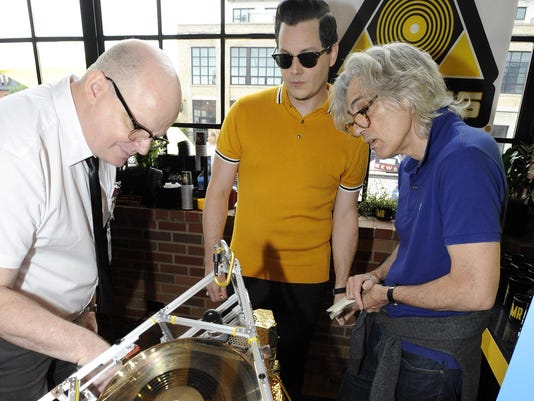 From left: Kevin Carrico, of Royal Oak, the special projects engineer who built the Icarus craft, talks with Jack White, center, and The New Yorker writer Alec Wilkinson, right, about the Icarus on Saturday at Third Man Records in Detroit.(Photo: Todd McInturf / The Detroit News)Buy Photo

Detroit — To celebrate the seventh anniversary of his record studio’s first brick-and-mortar store in Nashville, Detroit musician Jack White wanted to do something special on Saturday.

And a party with cake and balloons would just not do.

So the founder of Third Man Records created a record of a new kind: he and his staff launched and played a record into near outer space.

The actual feat took place before Saturday — the staff would not disclose the date — when engineers and others gathered in a grassy field near Marsing, Idaho and launched Icarus, a space-proof turntable attached to a high-altitude balloon.

The craft reached 94,413 feet or about 19 miles, running for one hour and 50 minutes long. A parachute brought it back down to Earth, landing upside down in a vineyard, said Kevin Carrico, a special projects engineer with Third Man Records.

But dozens of fans gathered Saturday at 12:30 p.m. in the Cass Corridor store for a launch party to watch the pre-recorded video of the flight.

Carrico said the record being set was the first to play a vinyl record the furthest off the ground. Music has been played in outer space before, Carrico said, but no one has ever taken a vinyl record up to do it.

“Actually where we flew we only had one percent atmosphere. It’s an area called near space that NASA uses all the time. But it’s also space. Because if you are 99 percent out of the atmosphere, what are you in?”

Inside the craft was a gold-plated, 12-inch master of Carl Sagan’s “A Glorious Dawn,” which is the label’s 3 millionth record pressed.

The one of a kind craft, shaped in a isosceles triangle that is 22.5 inches on each side, took three years of collaboration to build. It contains a switch from an Apollo training modular and acted as the start switch for Icarus, Carrico.

White, who appeared at the Detroit store early Saturday, said the entire project is a tribute to Carl Sagan, to celebrate its 7th anniversary and the 3 millionth final press which he said “for an independent label is an incredible feat.”

“It’s kind a pointless thing at the same time and a beautiful and deep thing to spur people’s imagination....All I care about is that the 15 year old kid over there thinking something is interesting and he gets into music and gets him involved in his imagination,” White said.

The Sagan song began as a viral YouTube piece, White said, and a composer took dialogue from the Cosmos series and made a song out of it.

“It ended up being a beautiful, beautiful thing. The first lyrics ‘If you wish to make an apple pie from scratch you must first invent the universe,’ ” White said. “That kind of sums up what we are trying to do here...the frivolity of playing a record in space, but also the technology and science of doing that is incredibly complicated and deep.”

Launch parties were held at the Detroit and Nashville Third Man Record stores. Lauren Goldsmith, 18 of Berkley came by to see the craft in person.

“I’m only 18 and I haven’t gotten to see or be part of anything space related..I love space. I am really excited about this,” Goldsmith said.

John Thompson of Madison Heights brought his 4-year-old daughter Coda to the launch party to see White and be apart of the event. Coda got her photo with White but was quiet when asked about the experience. Her father was not.

“We are huge fans. Anything sent to space to play a record is pretty fricking cool,” Thompson said.