Shane McMahon goes flying at Hell in a Cell

World Wrestling Entertainment went all out during its debut event at Little Caesars Arena on Sunday night. The Hell in a Cell Pay Per View event featured a pair of title changes, many “this is awesome!” chants from the sold-out crowd of 16,206 and one high flying leap that needs to be seen to be believed. 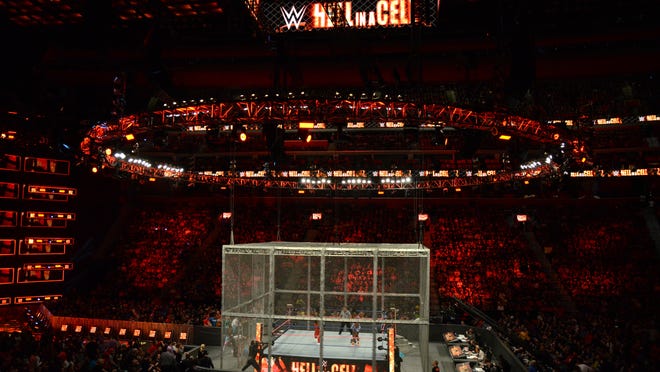 That leap came courtesy of Shane McMahon, son of WWE head honcho Vince McMahon, who jumped from the top of a 20-foot cage and crashed through a table below. He was aiming to put a flying elbow to his rival, Kevin Owens, but Owens was moved from harm’s way at the last second by his longtime rival turned ally, Sami Zayn. (Why’d Sami do it? Well, you’ll have to turn into WWE “Smackdown” on Tuesday night to find out.)

McMahon’s big tumble mirrored a similar spot at WrestleMania 32, when he jumped from the top of the Hell in a Cell structure during his fight against the Undertaker. (He missed his opponent that time, too.) McMahon recently told the News he felt he owed Detroit fans a debt of gratitude after he made his return to WWE in front of a Joe Louis Arena crowd that responded with three minutes of uninterrupted applause, and he more than made good on it, putting his body on the line with the heart-stopping stunt.

Elsewhere, tag team champions the New Day dropped their titles to the Usos in a match that saw repeated whippings with Kendo sticks, and Baron Corbin took the United States title from A.J. Styles in a triple threat match that also featured Tye Dillinger. Smackdown Women’s Champion Natalya was able to retain her belt against Charlotte Flair, despite losing the match by disqualification, and WWE Champion Jinder Mahal held onto his strap in his fight against Shinsuke Nakamura.

WWE will return to Little Caesars Arena on Dec. 27 during the WWE Live Holiday Tour. Tickets go on sale at 10 a.m. Oct. 20.