Plant-based restaurants, festivals and menu items are sprouting up in Metro Detroit 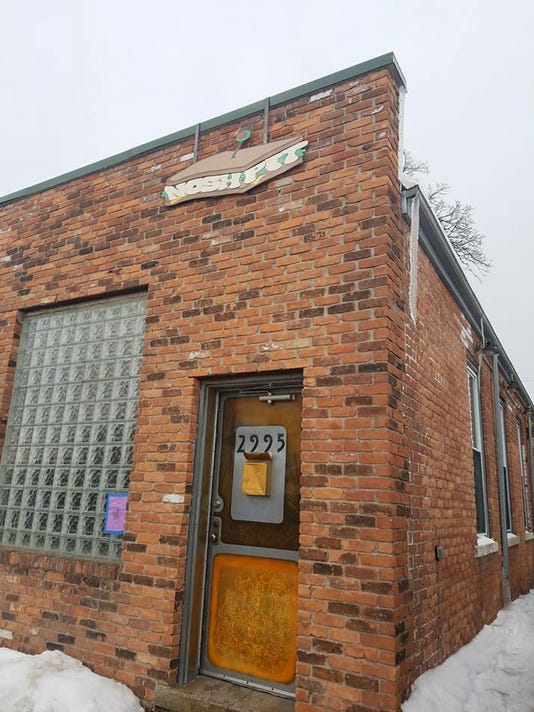 The exterior of the Nosh Pit cafe, which debuts Thursday in Hamtramck.(Photo: The Nosh Pit)

Forbes reports that plant-based food options rose 8.1 percent in in the United States in 2017, and vegan cheese is expected to be a $4 billion industry by 2024.

Thursday the vegan/vegetarian food truck Nosh Pit will debut its brick-and-mortar cafe in Hamtramck. The restaurant, 2995 Yemans, will be open 4-9 p.m. Thurs.-Sat. for now. I’m told that hours may expand down the road once the ball gets rolling.

While the food truck does offer real, cow’s milk cheese, this Hamtramck cafe, which seats about 65, will serve 100 percent vegan fare; no animal products of any kind will be offered.

On the menu will be favorites from the food truck like the Karen, a grilled cheese made with roasted red peppers, vegan aioli, vegan pesto and vegan cheese on kosher rye. Nosh Pit also has a variety of soups and stews and a hearty lentil “sloppy joe” served on Avalon bread with Better Made chips inside the sandwich for a fun crunch.

Some items that will be largely exclusive to the cafe include a spaghetti squash and “meatballs,” braised greens and cauliflower “steak.”

Co-owner Stefan Kudek – he runs the Nosh Pit empire with partners Karen Kahn and Eric Szulc – says he hopes the cafe will be more than a place for vegan food, but a gathering place for neighbors.

For those fans of the traveling Nosh Pit, don’t fret, the food truck and food cart will remain in operation. In fact, they’ll be at the V313 March 8 at Eastern Market.

Produced by the same folks that have brought vegan and vegetarian food festivals to Royal Oak, Shelby Township, Toledo and elsewhere, the V313 is the first event of its kind inside the city proper. There will be things to eat from the area’s vegetarian and vegan food trucks and restaurants including Nosh Pit, Detroit Vegan Soul, the Clean Plate, Shimmy Shack and others.

V313 will have live music, games, exhibitors and vendors and panels about the plant-based lifestyle, including “Vegans of Color” and “Plant-Powered Women.” Keynote speaker will be Milton Mills, M.D., of the Physicians Committee for Responsible Medicine and Black Vegans Rock.

For single vegans, the event will have a vegetarian speed-dating opportunity.

Admission to V313 is $15 at the door. Buy tickets in advance online at V313.info and receive $5 in food vouchers. You can also preregister for the speed dating on the website.

Back at the Nosh Pit, Kudek said that one of the community gatherings they recently hosted was a group of folks who were looking to start a consultation service for restaurants that want to add vegan food to their menu, which is becoming more common.

In the past few months I’ve seen more restaurants offering better alternatives to black bean burgers or frozen veggie patties. The plant-based Impossible Burger and Beyond Burger are both meant to more closely resemble beef.

Michael Symon’s B Spot burger joints – 176 N. Adams in Rochester Hills and 310 S. Main in Royal Oak – made a big to-do about being the first to bring Impossible Burgers to Metro Detroit tables in September.

Both Ale Mary’s (316 S. Main, Royal Oak) and its sister restaurant Terry’s Terrace (36470 Jefferson, Harrison Township) offer a separate menu of vegan delights that includes both the Impossible Burger and the similar Beyond Burger. They both offer a vegan cocktail list, too.

The Impossible Burger patty can also be found at Brome Modern Eatery, which is at 22062 Michigan in Dearborn and has a new location coming soon to 607 Shelby in Detroit. They also boast other vegan sandwiches, in addition to 100 percent organic grass-fed beef and cage-free chicken.

Plant-based burgers are all over, and vegan cheese is getting its day, too. I used to only see it at longstanding vegan mainstays like Inn Season Cafe (500 E. Fourth, Royal Oak) or Om Cafe (23136 Woodward in Ferndale). Now it’s available even at franchise restaurants like the California-based chain Blaze Pizza. The fast-casual, built-your-own-pizza concept offers vegan cheese. The chain opened its ninth Michigan location this week at 2065 N. Squirrel in Auburn Hills.

Lastly, the debut of the much-anticipated Chili Mustard Onions is coming up. The 1,200-square-foot vegan restaurant is expected to open April 1 at 3411 Brush in Detroit. Besides a vegan coney dog, there will be a meat-less version of a Big Mac sandwich – the Big Mock – and vegan desserts like bumpy cake.

Of course this type of lifestyle isn’t for everybody and may never dominate the mainstream. But for those who want to live a more sustainable, plant-based life, the options are growing.