Two Detroit shows, "Old" by Scott Hocking at David Klein Gallery, and "Person, Place or Thing" at Corktown Studios, are well worth an early summer visit. 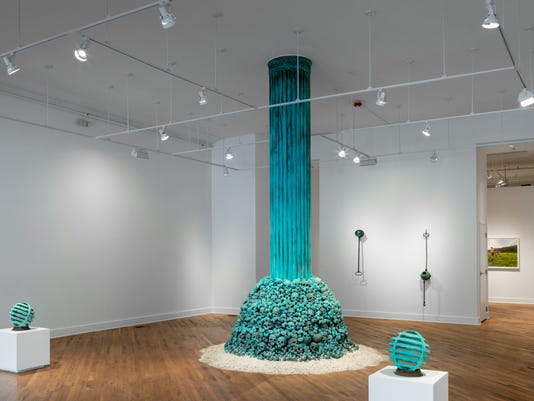 This is, after all, the Detroit artist who erected a huge wood-brick ziggurat in an abandoned car factory, and planted a small forest of 1970s TV consoles atop martini columns in the ruins of Albert Kahn's Packard plant.

With "OLD" at Detroit's David Klein Gallery through June 23, Hocking, a 2011 Kresge Artist Fellow, pushes his fascination with the ancient, the withered and the bizarre.

"Everything feels old," Hocking wrote in his artist's statement, referring to Detroit and the world at large. "This place feels old. I feel old."

Remarkable as always is Hocking's ability to warp the bizarre into the beautiful, as with the show's central installation, also titled "OLD."

Hocking's famous for grafting his art onto specific landscapes, often creating mind-blowing installations that echo with myth, mysticism and folklore.

At David Klein, the artist worked a preexisting support column in the gallery's front room into the composition by stacking a macabre pile of femurs, tibias and skulls around its classical base.

(Hocking is meticulous. He weighed the 1,000-plus gypsum "bones," which clocked in at exactly one ton.)

If the Paris catacombs pop to mind, which he visited in 2015, you're not far off base. In his artist's statement, Hocking also likens the pile to a Native American burial ground that's been unearthed.

Giving the composition real punch is its copper color, which covers bones and column alike, and ranges from dull bronze to bright verdigris. 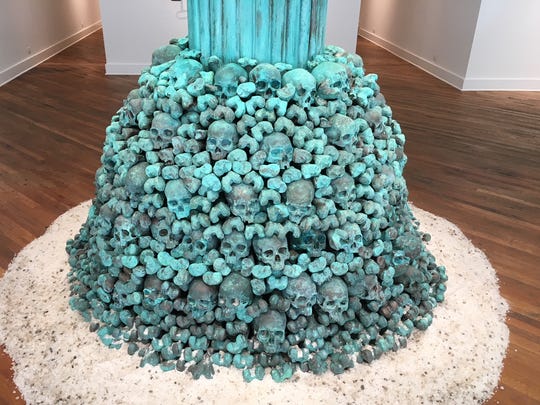 Painted skulls and bones, made of gypsum, comprise the base of Scott Hocking's "OLD" at Detroit's David Klein Gallery. (Photo: Michael H. Hodges)

In the back gallery are large photos of Hocking's earlier installations, including his not-to-be-missed Ark outside Port Austin, "Celestial Ship."

There's also a marvelous picture of the artist himself trying to mount a "dead horse" he's crafted out of bones and twigs -- not something you see every day.

[Update: The show has since been extended to June 19, by appointment.]

But even if chances to visit are slim (Corktown Studios doesn't maintain regular hours -- visits must be arranged in advance), it's an exhibition that decidedly deserves a shout out.

The stand-outs in this small-but-strong exhibition are Deneau's mosaics of urban Detroit scenes, crafted out of cut glass and found items.

Deneau, like Hocking a College for Creative Studies graduate, has long been known for her beautifully rendered paintings of gritty Detroit street scenes.

But over a year ago, she transitioned into working almost exclusively with mosaic.

"I love it," Deneau said of her switch. And she insists it still feels very much like painting, in its way, "because I choose the glass colors -- just like I would choose paint."

Deneau adds, however, that mistakes are a lot easier to fix in paint.

With glass mosaic, she said, "You have to chip it out."

All the same, the resulting compositions often dazzle.

They're so pretty, in fact, that it's a darned good thing Deneau's subjects are on the rough and un-pretty side, which cuts what might otherwise be too sweet.

Other intriguing pieces to search out in "Person, Place or Thing" are Amy Fell's "Diner Phone" and Melissa Jones' "The Sentry," which stars a raven atop a ruined architectural element.

Show extended to June 19, by appointment