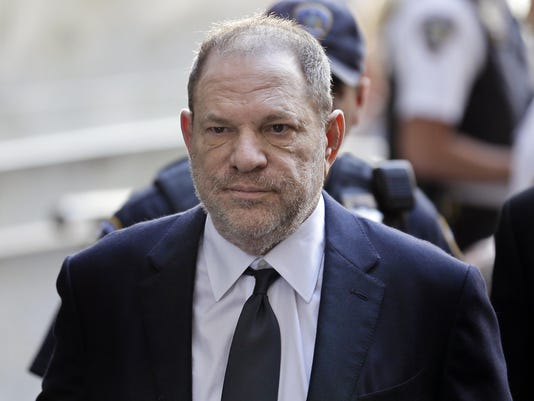 Weinstein: I gave out roles for sex

Harvey Weinstein admitted for the first time in an interview that he “offered acting jobs in exchange for sex,” but, he added, “so does everyone.” The article appeared Friday in the British magazine The Spectator. “Yes, I did offer acting jobs in exchange for sex,” the former mogul told gossip great Taki Theodoracopulos. “But so did and still does everyone.” If convicted of rape or sexual assault, Weinstein, 66, is looking at spending the rest of his life in the big house. He also said that he "never, ever" forced himself on any woman, according to Page Six.

Out magazine reports that actress Scarlett Johansson has given up her starring role in "Rub and Tug," an upcoming drama about a transgendered person. The production from New Regency and its 33-year-old star got hammered on social media after she was cast, with many wondering why in the world a trans actress wasn't going to play a trans person. "While I would have loved the opportunity to bring (this) story and transition to life," Johansson told Out, "I understand why many feel (the protagonist) should be portrayed by a transgender person, and I am thankful that this casting debate, albeit controversial, has sparked a larger conversation about diversity and representation in film."

Got some spare change? The Mayan-revival Ennis House outside Los Angeles, designed by Frank Lloyd Wright in 1924, is up for sale. Asking price? A cool $23 million. The Los Feliz house, owned by bazillionaire Ron Burkle, who paid $4.5 million in 2011, has appeared 80 times in films and movies, though is probably best known for its starring role in "Blade Runner." Other star turns included "Rush Hour" and "Buffy the Vampire Slayer."

In a race many newlyweds may sympathize with, "Vanderpump Rules" stars Brittany Cartwright, 29, and Jax Taylor, 39, are working out and slimming down to look their best on their wedding day. The pair, both of whom have lost weight, told London's Daily Mail that in addition to hitting the gym, Cartwright also sought medical help -- for that pesky double chin. "I had a kybella shot in my neck and it basically helps to dissolve the fat," she said. Yikes.