Use the map to find significant places, from her childhood home and church to her final resting place 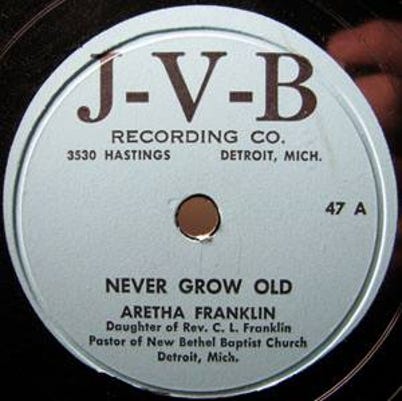 Aretha Franklin was born March 25, 1942, in Memphis, Tennessee, and lived in New York City and Los Angeles as adult while forging her legendary career. She returned to  Detroit in the early ’80s and called it home for the rest  of her life. Here are 10 key places in the city that helped shape the Queen of Soul:

1: The 7400 block of La Salle Boulevard was the influential childhood home and the park named after her father.

"It was the most beautiful home I had ever seen," Franklin said of the 5,200-square-foot-house in the La Salle Gardens neighborhood. Her father, the Rev. Clarence LaVaughn (C.L.) Franklin, had national prominence and it meant black musical luminaries regularly visited, including Nat King Cole, Mahalia Jackson, Art Tatum and Sam Cooke,who teenage Aretha swooned over. Future Motown founder Berry Gordy Jr. and future Motown artist Smokey Robinson lived nearby.

Rev. Franklin lived in the home long after Aretha moved. In 1979, violent tragedy struck. During an attempted home burglary, Rev. Franklin was shot twice. He lingered in a coma for five years before his death in 1984. The city renamed nearby La Salle Park after him.  She finally sold the house in 2013 for $81,000.

This was the church where Aretha’s father preached. The church was forced to relocate for many reasons, including making way for the 1-375. It moved to its current location in 1963. Like Mozart, Aretha was a child prodigy. By age 14, in 1956, she recorded "Precious Lord Take My Hand"  as part of her father’s traveling gospel show, proving she had already achieved technical mastery. By the time of that recording, she was already a mother. Her own mother, Barbara Siggers Franklin, died in 1952.

4. Flame Show Bar, where Aretha made a 10-day nightclub appearance in 1963. John R and Canfield (now a Detroit Medical Center parking garage). A 20-year-old Aretha was billed as “daughter of Rev. C.L. Franklin,” according to research dug up by local historian Ken Coleman. In fact, Aretha had already signed with Columbia Records, where she had only minor hits. A May 1963 ad in Detroit’s Michigan Chronicle, an African-American owned newspaper, also describes the bar gig as “her first Detroit nightclub appearance.”

5. The 14000 block of Sorrento, the house she lived in with her first husband, Theodore “Ted” White. Aretha bought the house in 1967 and lived in it for about five years — long after the marriage ended in 1969. Like her other Detroit properties, she held onto it for years, but by the late ’80s, the house had become empty and neighbors complained of its blighted state.

6. Cobo Hall (now Cobo Center), 1 Washington Blvd.,where she sang to 12,000 fans, including the Rev. Martin Luther King Jr, on “Aretha Franklin Day,” Feb. 16, 1968. Then-Mayor Jerome P. Cavanaugh designated the day to honor her. By then, Aretha was recording for Atlantic Records, where she made  now-classic songs, including “(You Make Me Feel Like) A Natural Woman,”  “Chain of Fools” and the career-defining anthem “Respect.”

7. United Sound Systems Recording Studios, 5840 Second, the place where Aretha recorded some of her ’80s hits. Keith Richards and Aretha Franklin’s recorded the remake of The Rolling Stones’ “Jumpin’ Jack Flash” there; Franklin’s duet with Eurythmics’ Annie Lennox for “Sisters Are Doing It For Themselves” and parts of the platinum album “Who’s Zoomin’ Who?” were made there.

8. Detroit-area places featured in the  "Freeway of Love" video, including Doug’s Body Shop, 22061 Woodward, Ferndale,  The Ford Motor Co. River Rouge complex in Dearborn, the former General Motors headquarters (now called Cadillac Place) in New Center  and plenty of Detroit freeways, including 1-75, I-94 and the Lodge. Released in July 1985 on the “Who’s Zoomin’ Who?” album, the song "Freeway of Love" became her first top 10 hit in more than a decade.

9. Last place she lived. Riverfront Towers, 250 Riverfront Drive. As her health declined, Aretha moved out of her Bloomfield Hills home and returned to the heart of Detroit to her condominium/apartment complex downtown.

10. Woodlawn Cemetery, 19975 Woodward, where she will lay in rest with her father, siblings and nephew.

Long live the Queen of Soul.