A long-vanished Detroit neighborhood, Black Bottom, has magically re-materialized at the Detroit Public Library's Main Branch in an exhibition running through March 15.

"Black Bottom Street View"  is a photography show documenting entire streets and avenues in the African-American district that fell victim to urban "renewal" and the wrecking ball starting in the 1950s, leveled to make room for Mies van der Rohe's Lafayette Park and other developments on the city's near-east side.

Just before demolition, the city sent photographers out — a bit like Google Street View — to shoot every structure in what was officially dismissed as a "slum." The result was some 2,000 images documenting clapboard houses, New Orleans shotguns, churches and corner stores, all of which look far tidier than the government's description.

"The demolition was triggered by the passage of the Federal Housing Act of 1949," said exhibition creator Emily Kutil, an architect who teaches at the University of Detroit Mercy. "That act funded destruction of African-American neighborhoods all over the country."

At the time, there were few other Detroit neighborhoods where black residents could live, she notes. In part because of this, Black Bottom enjoyed a remarkable diversity of economic circumstance. 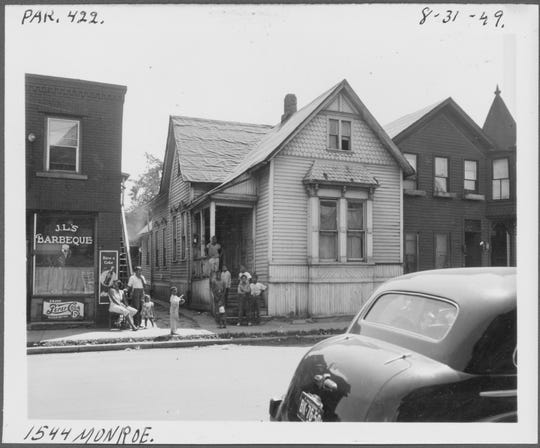 "You'd have a doctor living next to a sharecropper from the south," she said. "And it was home to a bunch of really important black institutions, like Calvary Baptist Church."

City officials — all white in those years — wasted little time getting going. "They started taking photos the week after the act passed," Kutil said. "They'd been planning this for a decade."

Kutil stumbled on the images in the DPL online archives while looking for pictures of Hastings Street, Black Bottom's legendary commercial strip that now lies buried somewhere beneath Interstate 375.

As she started downloading and organizing the images, "I soon realized the photos were continuous — that you can see the whole street," Kutil said.

Friends encouraged her to think big and apply for a Knight Arts Challenge grant.

"I never expected to get picked," Kutil said. But she did, and the money helped fund her website, blackbottomstreetview.com, which went up last year, and, now, the exhibition at the library.

To organize the pictures, Kutil and U-D Mercy students Jalen Smith and Bilqees Salie built freestanding doorways or portals, each of which frames a particular street. Lama Chamseddine helped Kutil organize the photos, which have been digitally stitched together into long strips that are wrapped around the wooden structures to create entire "blocks."

Geographically, the exhibition runs from Larned to the mostly-disappeared Mullett (south of Gratiot near the Chrysler Freeway), and Hastings to the Dequindre Cut, about one-fifth of the original neighborhood. 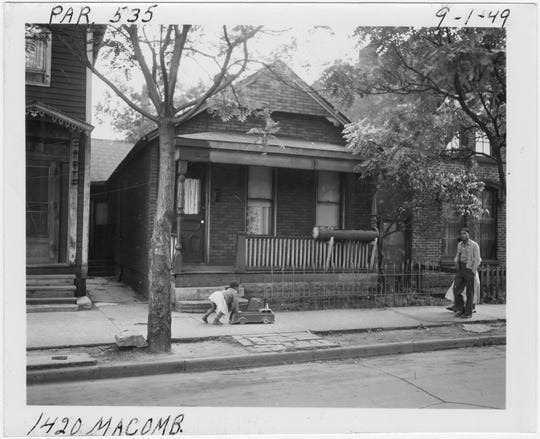 Marsha Music, a Kresge Literary Arts Fellow who grew up in Highland Park, has written extensively about Black Bottom. Her father owned Joe's Record Shop just outside the district, and Music won a Knight Foundation grant to produce an upcoming film about him and the area called "Hastings Street Blues."

Kutil reached out to Music for help with the exhibition, and the latter has been deeply impressed with the result.

"I cannot overstate the significance of the work Emily’s done," Music said. "The neighborhood has an essential role in Detroit's African-American history. The show belies the line that Black Bottom was just a slum. Those homes and churches were substantial."

The exhibition is particularly important for young people, Music suggested, many of whom may never have heard of the neighborhood where their grandparents likely lived.

Kutil confirms that. "I spoke to a Mumford High School social-justice club that was studying gentrification," she said, "and none of them had ever heard of Black Bottom."