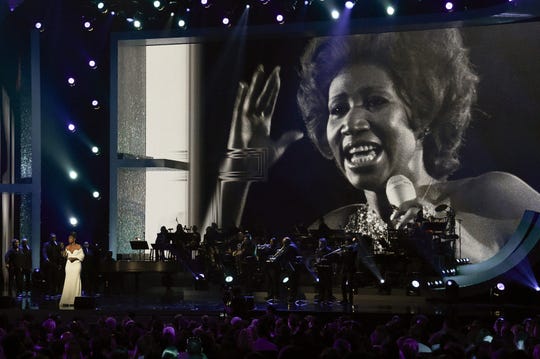 An image of Aretha Franklin appears on the screen as Jennifer Hudson performs at the "Aretha! A Grammy Celebration For The Queen Of Soul" event at the Shrine Auditorium in Los Angeles on Jan. 13. The special is set to air Sunday on CBS. (Photo: Richard Shotwell, Richard Shotwell/Invision/AP)

Patti LaBelle, Alicia Keys, H.E.R. and Celine Dion are among the artists participating in "Aretha! A GRAMMY Celebration For The Queen Of Soul," airing at 9 p.m. Sunday on CBS.

The two-hour special is hosted by Tyler Perry and was taped on Jan. 13 at the Shrine Auditorium in Los Angeles.

In a clip released from the show, LaBelle performs "Call Me" and talks about performing on the special.

"You can't channel Aretha, heck no. You just go up there and pray that she loves you," says LaBelle, who calls Franklin "the greatest singer in the world" and her "hero." "Ain't no channeling the Queen, honey."

Another clip shows H.E.R. performing and discussing "I Say a Little Prayer for You."

"I don't know one singer that doesn't listen to Aretha Franklin," the Grammy winner says.

The special also includes Chloe x Halle performing "Sisters Are Doing It For Themselves," Fantasia and Rob Thomas doing "I Knew You Were Waiting (For Me)" and Yolanda Adams and Common performing "Young, Gifted And Black."

Franklin died in August at the age of 76.

"Aretha! A GRAMMY Celebration For The Queen Of Soul"