Get to know your gargoyles: Book celebrates sculpture on Detroit buildings

Get to know your gargoyles: Book celebrates sculpture on Detroit buildings 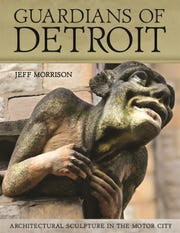 They peer down at us from the Fisher Building, Bankers Trust, Masonic Temple, and any number of other Detroit buildings — gargoyles and other frozen faces sculpted 100 years ago that adorn the city's grand architecture.

Photographer and author Jeff Morrison was always fascinated by their presence when he was a kid, he said, and was forever asking his dad, "Why is that there? What does it mean?"

Happily for all of us, that curiosity led to a new book just being released — "Guardians of Detroit: Architectural Sculpture in the Motor City," from Wayne State University Press.

With 770 images of 59 structures, from churches to branches of the Detroit Public Library, this is a lavishly illustrated, coffee table book to be savored and paged through at leisure.

"I found so much architectural sculpture in Detroit that I had to limit the book to just the city," Morrison said. "So I think one of the next books might be 'Guardians of Michigan,' doing the rest of the state."

Aficianados of Detroit architecture will be delighted at this opportunity to learn more about the often anonymous sculptors who collaborated with architects during the golden age of building, from the teens to the 1930s, whether Corrado Parducci, Julius Melchers or Thomas Tibble.

"The work on the Book-Cadillac Hotel was Tibble's," Morrison said, "while Parducci did the exterior work on the Fisher Building -- though it was designed by Geza Maroti."

The veritable menagerie of leering gargoyles at the top of the Fisher, however — largely invisible from the ground — was crafted by Ulysses Ricci.

"The original plan called for 172 outside sculptures by Edward Q. Wagner and Richard G. Reuther," he said, "but 10 or so didn’t get made because Detroit News founder James Scripps, who was paying for everything, got mad at the congregation and pulled his money and walked away."

On the upside, there's a rumor that Scripps' angry ghost haunts the church's bell tower to this day. 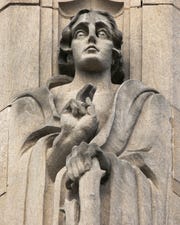 Morrison, who was a graphic artist by trade, said he's been shooting building details for over 15 years, but only buckled down on producing the book starting about 2016.

Interestingly, Morrison shot everything with his full-frame Canon 5D Mark III without benefit of tripod.

"Almost all the shots, about 95 percent, were shot from the ground," he said, "and all hand-held."

There's also a "Guardians of Detroit" coloring book that Morrison released last year, available on his website. As for new projects, in addition to a possible "Guardians of Michigan," Morrison has in mind a graphic novel based on architectural sculpture and aimed at young readers.

"My son is fantasy writer, and his wife is illustrator," he said. "So we might have some fun." 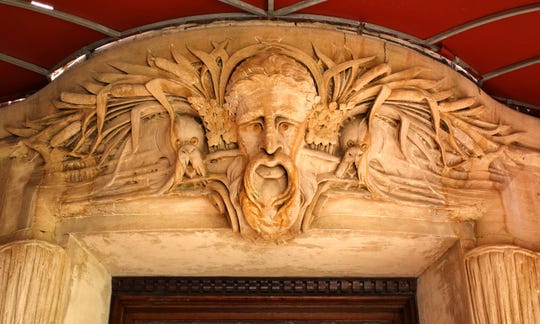 A lavish pediment over a doorway at Detroit Yacht Club. (Photo: Jeff Morrison)