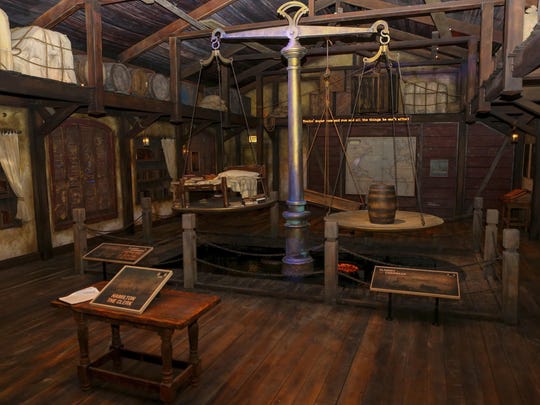 This April 25, 2019, photo shows on part of a 360-degree immersive experience to expand on “Hamilton” the hit Broadway musical in Chicago. (Photo: Teresa Crawford / AP)

Chicago – An exhibition that producers tout as a 360-degree immersive experience to expand on “Hamilton” the hit Broadway musical will enjoy a Chicago debut.

“Hamilton: The Exhibition” was to open Saturday in a temporary building erected on the city’s Northerly Island along Lake Michigan. Producers said the exhibit’s 19 rooms chronicle the life of founding father Alexander Hamilton.

The musical’s creator, Lin-Manuel Miranda, was scheduled to greet the first visitors Saturday morning. He also was one of the narrators on the exhibit’s audio tour, along with members of the original Broadway production, Phillipa Soo and Christopher Jackson.

Exhibit creative director David Korins said Miranda is “like your trusted sidekick” as visitors walk through Hamilton’s life as a trader in St. Croix to his death in a duel with Vice President Aaron Burr in 1804.

Plans are for the exhibit to travel to other cities, just as the stage musical is doing.

“Lin was really interested in creating an exhibition that ran parallel to the story of ‘Hamilton’ the show with Hamilton the man. So he’s been involved all along the way. I’ve been showing him renderings and sketches and models and keeping him up to date,” Korins said.

The exhibition uses lighting, sound, music and historical artifacts in each room. There are detailed replicas of New York streets in 1776 and George Washington’s war tent as visitors learn how the Revolutionary Army planned their shocking victory in the Battle of Yorktown.

“Our hope is that our show is the fuse that leads you to go and want to dig into the past of this country,” said Thomas Kail, director of “Hamilton” and artistic adviser for the exhibition. “And I think the exhibition allows us to service that more directly than the show does.”