We chat with Diana Abouali, who wants to make museum accessible to all 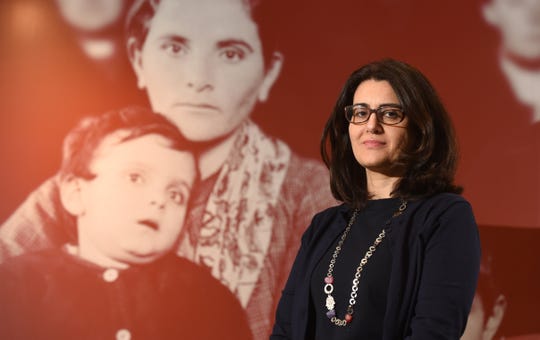 Diana Abouali, director of the Arab American National Museum in Dearborn, stands next to an exhibit on migrating to America. She was born in Toronto to Palestinian parents. (Photo: Max Ortiz, The Detroit News)

Diana Abouali, the new director of the Arab American National Museum, was born into a Palestinian family in Toronto.

When Abouali was about 7 her parents moved to Kuwait, where she attended the American school until graduation. She came to the U.S. to study at Wellesley College, followed by a doctoral program in history and Middle Eastern Studies at Harvard.

From 2004-2012, Abouali taught Middle Eastern history and Arabic at Dartmouth College, before relocating to Ramallah in the West Bank to work at the newly established Palestinian Museum. Most recently, she worked in Amman, Jordan, with Syrian artisans who now find themselves refugees in a foreign country.

The Detroit News sat down with Abouali Tuesday to chat national origins, anti-Islamic bias, her faith in America, and what excites her about Detroit.

You were born in Toronto, but where did your family come from?

Diana Abouali: "My family is Palestinian. My father's family was from Nablus in the West Bank, and my mother's from Gaza City. They met when they were each working in Kuwait, and then moved to Canada."

Why did you want to be director of the Arab American National Museum?

"The chance to work in an institution like this -- a prestigious, national institution -- was an opportunity I couldn't miss. And getting a chance to shape the museum moving forward into its second decade was something I wanted to take on."

What do you bring to the job?

"I'm a historian who's worked in both museums and cultural-heritage organizations, and while I'm Canadian, I've lived in the U.S. for some 22 years. I'm comfortable here, and comfortable in the Middle East speaking Arabic. I can bridge these cultures easily -- interacting with new Arab immigrants, Arab-Americans who've been here for years, and Americans who aren't Arab."

How does Dearborn strike you?

"I've never lived anywhere in N. America with such a strong Arab community. Arab culture is very much a part of Dearborn. I like how confident the younger generation is in their Islamic identity and Arab-ness. And I love seeing people who aren't Arab in our supermarkets, stores and restaurants. There's a lot of give-and-take here. It's fascinating to see."

Are you an optimist or pessimist on America and the Arab world?

"I'm cautious about the way certain politicians are polarizing the American people. There's a climate of xenophobia and Islamophobia which, unfortunately, comes from above. But I trust most Americans can see beyond that. If I didn't have faith in the American people, I wouldn't have left Jordan and come here at this time."

What are you ambitions for the museum?

"I have to say, its early days. My vision is beginning to take shape, but it's something I have to shape along with my staff -- and I have a great staff. But I'd like to focus on making the museum as accessible as possible for all people, as well as continuing to make it a welcoming place for all Arab-Americans. If you identify as Arab, we want you to see your story reflected here.

Anything coming up that particularly excites you?

"Yes - the museum is opening a photography exhibition this weekend at the Ellis Island National Museum of Immigration in New York, 'What We Carried: Fragments and Memories from Syria and Iraq,' which will be up through Labor Day. It's actually our second show that's gone to Ellis Island. The first was 'Little Syria.'"

And finally, as a newcomer -- how's Detroit treating you?

"The food is very good! [She laughs.] I've never had Yemeni food before. Of course, I haven't had a chance to explore much yet -- I just bought a car. But I'm impressed by the vibrant art community here, and the collaborative spirit that seems to be present, where it's all about making the city a better place through arts and culture. For me, it's an exciting time to be in Detroit."