Dean Kuipers' new memoir, "The Deer Camp," tells a tale of redeeming the land and healing a family. 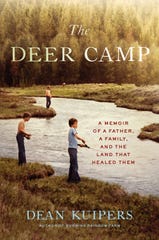 "The Deer Camp" explores how restoring the land helped bring a father and his sons back together. (Photo: Bloomsbury Publishing)

Just out of Kalamazoo College and living in New York’s East Village, Dean Kuipers told anyone who asked that his father was dead.

That wasn't true. But he and his dad Bruce Kuipers didn’t have any relationship to speak of, despite inhabiting the same house for 18 years.

In his new book, “The Deer Camp: A Memoir of a Father, a Family, and the Land that Healed Them" (Bloomsbury Publishing), Kuipers, 55, tells a story of transformation through the redemptive power of working the soil.

His father, who died in 2010, was a hard guy to grow up with, he said, and as a young man he pretty much wrote him out of his life.

"Dad was fun in the outdoors, when it was all about hunting, fishing and camping," the author said. "But in the house he was kind of a nightmare -- terse and quietly menacing."

His three sons quickly learned not to expect much.

“Dad couldn’t tolerate neediness, even the ordinary neediness of children," Kuipers wrote in the book, "and I’d learned long ago not to need him for anything.”

So when his father phoned him in New York with the happy news that he’d bought a 95-acre hunting camp near Walkerville, 20 miles inland from Ludington, the former was guarded and unenthusiastic.

Kalamazoo native Dean Kuipers just published "The Deer Camp: A Memoir of a Father, a Family, and the Land that Healed Them." (Photo: Milo Gladstein)

Bruce, as Kuipers calls his father through most of the memoir, wanted his boys to come and hunt and hang out. Somewhat reluctantly, the three did, but encountered the same controlling, angry father they'd left behind.

It would be seven more years before Kuipers returned.

Under pressure from his brother Brett, he agreed to help clear some of the land to create better hunting habitat.

Kuipers has a deep belief in the sacred value of protecting and nurturing the land. "Because I am a hunter," he wrote, "I have always been a liberal and environmental radical.”

The task was huge, clearing pine scrub to plant native trees and berry bushes that wildlife would respond to.

"It was hard work," he said. "There a lot of driving around on a tractor with a t-shirt wrapped around your face. But that's what really made us feel different. We weren't just walking onto a field looking for a bird with a shotgun. We were trying to grow a bird."

"We cut down about six acres of trees," Kuipers said, "and Dad was devastated: ‘You ruined my camp.' He even said if nothing grew back, he’d just sell the place."

But when Kuipers returned the next spring to research his 2006 nonfiction book, "Burning Rainbow Farm," he found a miraculous transformation had taken place.

"An entire new forest had come up out of the ground, as you'd expect in northern Michigan," he said. "There were tons of trees. And my dad," Kuipers added, still sounding a little astonished, "was a different person."

If it all sounds too good to be true, this soulful, elegantly written memoir of family strife and reconciliation will likely convince you otherwise.