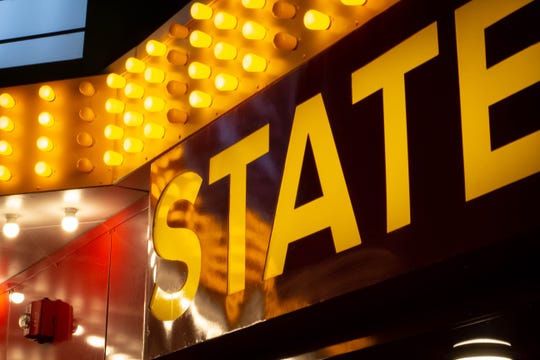 Few things are more thrilling for the emerging artist -- and nerve-wracking -- than putting your creations out into the world for the very first time, and seeing what works, what sells, and what doesn't. 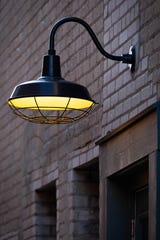 James Glisson says he likes utilizing depth of field in his photography, as well as interesting light. (Photo: James Glisson)

Three young artists will face this trial by fire Thursday-Sunday at the Ann Arbor Art Fair. One is participating in the Emerging Artists Program at the Summer Art Fair, while the other two are in New Artists New Art at the Ann Arbor Street Fair: The Original.

"I am super nervous," said photographer James Glisson, who's one of seven students in the NANA program. "It’s like opening up your biggest passion to the world, and inviting whatever comes," he said, "and that’s a little scary."

Fearsome though it might be, it's undeniably great exposure -- you're there with over 1,000 professional artists, and on view to the half-million art lovers who regularly swarm downtown Ann Arbor for the fair's four days.

Reached Tuesday at her parents' home in Chicago, Saks-Fithian said, "I just finished packing everything up, and am just about to drive to Ann Arbor."

The 22-year-old, who expects to graduate from the University of Michigan in December, will be presenting her line of intricately patterned ceramics -- all based on the fishnet stockings she likes wearing.

Saks-Fithian inserts the vessel she's working on into the stocking, almost as if it were part of a leg, and then sprays on what she calls a "slip."

She explained: "That's basically a watered-down, colored clay. Once it’s dry, I peel the fishnets off, and that leaves the pattern in the negative space where the stocking was."

"I’ve been wearing patterned fishnets for a long time," Saks-Fithian said, a survivor of sexual assault who's considering a career in art therapy.

"I feel good and confident in them," she said. "They make me feel like myself -- and like my body belongs to me."

Saks-Fithian's ceramics work inspires much the same response, so she decided to combine the two, with happy results.

She's very excited about appearing in her first art fair, and also to have a break from the sprint to get ready.

"I’ve been a robot these past two weeks," Saks-Fithian said. "I made 140 pieces in the past few months. I’ve been a crazy person."

She'll be vending her wares and chatting with potential customers at booth WA801 near E. Washington and Thayer streets close to North Quad.

Photographer Glisson, originally from New Hampshire but now living in Chelsea, said his work ranges over many subjects including nature, architecture and up-close "macro" shots.

"My biggest themes," he said, "are lighting and texture."

While the Washtenaw Community College student has a day job as a research analyst, his professional photography has grown to include real estate, weddings and portraiture. He finds documenting buildings interesting and challenging, but loves doing live subjects.

"Shooting people is fun and always unexpected," Glisson said. "You never know what you’re going to be looking for one second to the next. Portraiture is some of the most difficult work I’ve ever done," he added, "but easily the most rewarding."

For tech-heads, Glisson, 30, uses a Fujifilm X-t2 -- a new generation of cameras that dispense with the standard interior mirror.

"Mirrorless cameras give you the opportunity to work with a wider range of lenses," he said, "including vintage lenses that can give interesting character to photos." 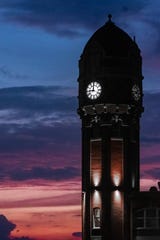 Glisson, who's only been in Michigan a few years, said he never got the chance to really prowl the Ann Arbor Art Fair before.

"I only poked around a little bit once," he said, "so this is largely going to be a new experience for me. It’s going to be fun."

He credits his WCC photography instructor, Jennifer Baker, with encouraging him to apply to the NANA program. "Somehow I managed to eke my way in," he said with a laugh. "I'm not sure quite how."

You'll find Glisson at booth WA801 at Washington and Thayer.

Despite focusing on glassblowing at the College for Creative Studies, where Rose graduated in May, the 23-year-old from St. Joseph will just be bringing jewelry made of reclaimed automotive leather and ceramics.

"I went to CCS for glassblowing," Rose said, "but was a crafts-department major, so I do everything from glass to welding to furniture-making and ceramics."

Interestingly, while she's taken a class in jewelry-making, she's really only pursued that line in a big way since February -- when Rose wanted to make an anniversary gift for her mother.

All of which is totally cool -- but why isn't she bringing glass work?

"Part of the reason is my local glass studio shut down, and I don’t have access to another at the moment," Rose said. "The other part is that I’m exploring the same type of relationship between things with my jewelry." 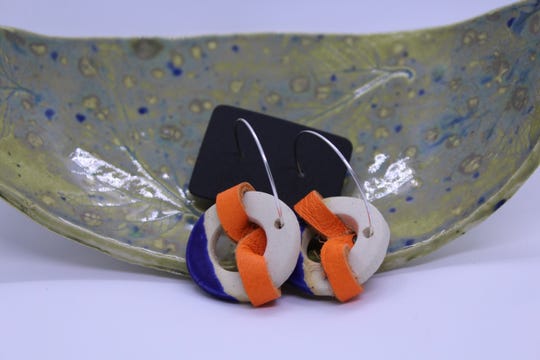 She particularly likes combining the natural leather with man-made ceramics.

"The ceramic part is the main focal point," she said, "like a stone or a charm on a hoop. The leather is used for pops of color and texture, or woven inside the jewelry -- and that’s where you get the relationship between the two materials."

This will be Rose's first art fair, and she's stoked.

Rose will be at booth MN388 on Main Street near William.

All across downtown Ann Arbor