Review: 'Scary Stories' lives up to its billing

Review: 'Scary Stories' lives up to its billing

Alvin Schwartz' popular series of children's horror books comes to life in "Scary Stories to Tell in the Dark," a fun, lively adaptation that pays due homage to the original and manages to keenly balance laughs and scares.

The "Scary Stories" books were released in three volumes between 1981 and 1991, and each contained about two dozen short stories largely based on folklore and urban legends. 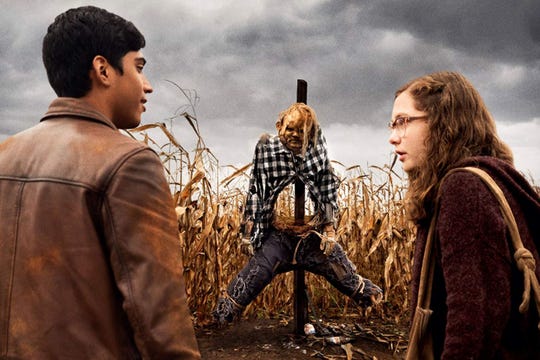 Michael Garza and Zoe Margaret Colletti in "Scary Stories to Tell in the Dark." (Photo: Lionsgate)

Director André Øvredal, working from a screenplay based on several of those stories (including "Harold," "The Red Spot" and "The Big Toe"), brings a flare for the genuinely creepy to this affair. Think of "Scary Stories" as a graduation from kiddie horror such as "Goosebumps" before it's time to move on to more frightening tales of human horror, such as high school.

Set in Mill Valley, Penn. between Halloween and Election Day in 1968, "Scary Stories" follows a couple of teenagers — including Stella (Zoe Margaret Colletti) and Ramón (Michael Garza) — who break into an old haunted house at the edge of town.

As the legend goes, the home has a cursed history stemming from a family who locked their daughter up in a chamber inside the house. The teens make off with a book of short stories the girl supposedly wrote — in blood, no less — and find that the stories continue to write themselves, and begin happening to them.

"Scary Stories" uses Vietnam and the election of Richard Nixon as a political backdrop; the era is different, but the sense of tension and unease is similar to today. Øvredal stages several sequences that might frighten the pants off younger viewers, and a few older ones as well. That's because regardless of era, place or age, a well-told scary story is timeless.

'Scary Stories to Tell in the Dark'