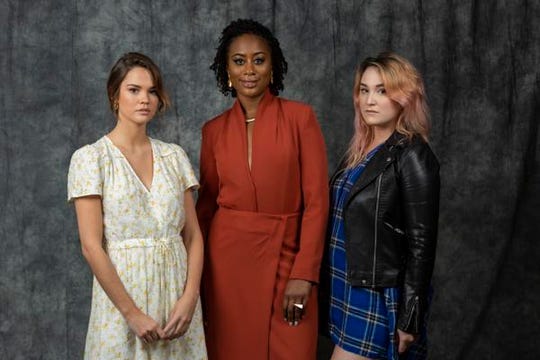 Yara Shahidi had a question: Why did it seem like men were disproportionately labeled geniuses compared to women in the same professions?

As it turns out, the writers on Shahidi’s Freeform series “grown-ish” were wondering the same thing, and the actress’ mention of the topic made the writers want to explore it in the show.

“They literally turned to their board and they’re like, ‘This on our board right now,’” Shahidi said.

The idea would soon come to fruition in an episode that had Shahidi’s Zoey and her friends grappling with the issue. It would also remind the 19-year-old actress that she works for a network that fills a gap in television by not only creating content for young people, but by giving them a voice behind the scenes, too. The result is shows that they, and their audience, feel represented by.

The approach has allowed Freeform to gain an audience with TV’s most valuable age demographic.

From May 2018 to May 2019, Freeform had nine of the top 50 original scripted series among women aged 18 to 34, which was more than any other cable network, according to Nielsen ratings.

Freeform’s top shows include “grown-ish,” a spinoff from ABC’s “black-ish” about a group of college students navigating issues from systemic racism to defining relationships; “The Bold Type,” which follows three young women navigating careers in magazine journalism; and “Good Trouble,” a spinoff from ABC Family’s “The Fosters” that focuses on an unlikely group of friends who share a communal living space in downtown Los Angeles.

Freeform, formerly known as ABC Family, rebranded in 2016 to lose the “family” appeal and narrowly target new adults – or, as Freeform President Tom Ascheim describes them, “basically legal adults” who “haven’t quite yet found their way in the world.”

Since the rebrand, very little is off limits on Freeform. Characters may explore their sexuality and navigate white privilege in the same episode.

“The Bold Type” actress Aisha Dee said that unabashedly targeting young millennials (anyone born between 1981 and 1996) and Gen Zers (anyone born after 1996) has allowed the network to tell more relatable stories.

“They’ve always pushed the envelope, I think more than people gave them credit for, but now it’s just like this really special thing where you get to see so many different types of people represented and different stories,” Dee said.

Before the switch to Freeform, the network pushed boundaries with shows like “The Secret Life of the American Teenager,” which debuted in 2008 and tackled teenage pregnancy. From there, shows like “Pretty Little Liars” and “The Fosters” offered a less restrained portrayal of themes from sex and sexuality to race and class.

But even then, the network held itself back.

Actress Francia Raisa, who appeared on “Secret Life” and now stars in “grown-ish,” said the rebrand has led to bolder content.

“Even some of the stuff that we were talking about as the seasons progressed (on ‘Secret Life’), I saw that they were still kind of trying to dim it down a little bit like it was too much,” she said. “I’ve definitely seen it grow and progress, and I love it so much because they’re really trying to target that younger audience and it’s not so much of a fantasy anymore.”

Over the years, as shows like “The Fosters” and “Pretty Little Liars” took off, the word “family” didn’t exactly describe the audience the network was attracting. Instead of readjusting its content, the network changed its name.

Narrowing its target audience may have seemed risky at the time, but the decision has turned out to be one of Freeform’s greatest strengths.

Millennials are projected to surpass Baby Boomers as the largest age demographic in the United States this year, according to the Pew Center for Research.

That means they’re also on track to become the most desirable and most targeted television audience, said TV analyst Larry Gerbrandt.

With the rise of streaming platforms, the younger generations are also becoming less likely to have a cable subscription at all. As Gerbrandt put it: “These days you have to differentiate yourself somehow to stand out.”

Freeform sends all of its content next-day to Hulu to meet its audience where they’re at. The network also stands out by telling original stories that young people would be hard-pressed to find elsewhere on TV, Ascheim said.

“That’s such a great, inspiring moment from which to make television shows,” he said, adding the Freeform’s goal is “for people to find themselves in our shows and for people to realize that this sort of new adult life stage is messy.”

While millennials have been branded by some as entitled and lazy, at Freeform they are revered.

“This is a generation that probably has more on their plate than any generation since the Vietnam War, honestly, in terms of environment, politics, gender…” ‘grown-ish’ creator Kenya Barris said. “If anything, I think this is a really interesting time for them to talk about things from safe places to this and that. Why are we not sort of embracing that conversation?”

Barris said that he takes inspiration for the show from his Gen Z daughter, who Shahidi’s character, Zoey, is based on. For him, authenticity is everything. Even the writers’ room is predominantly millennials.

The actors help, too.

In some cases, the young actors have bigger opportunities to influence their show – as is the case with Shahidi, who is a producer on “grown-ish,” and “Good Trouble” lead actresses Maia Mitchell, 26, and Cierra Ramirez, 24, who are executive producers on their series.

“The Gen Zers and young millennials are very politically motivated and active, far more than the baby boomers were,” said “Good Trouble” showrunner, Joanna Johnson. “I think they see a world that is broken. They see a government that’s broken. They see injustice, and they want to change it.”

Freeform characters are activists, artists, and leaders. They represent different races, religions, and sexualities. And they all become better by learning from each other’s experiences.

Ascheim said he hopes shows like “Good Trouble,” “The Bold Type,” and “grown-ish” resonate similarly with young people outside the network.

Dee remembered a tweet she received after an episode of “The Bold Type” forced one of the characters to address white privilege.

“It was from these two young girls and they were roommates, and they had never talked about their race or their privilege in terms of like how they move through the world,” Dee said. “(One of them) tweeted me and said they paused the episode to have a conversation about it, and I’m sure they never would have had that conversation if they hadn’t watched the show.”

Those messages drive the casts to keep going.