'Paradise Blue' by Dominique Morisseau will be at Detroit Public Theatre through Nov. 3. 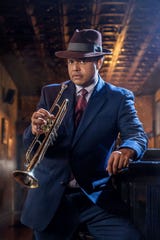 "Paradise Blue," the third installment in Dominique Morisseau's Detroit cycle, may be set in 1949, but it wrestles with issues that are surprisingly current -- gentrification, racism, and the fraught dynamics between men and women.

The play at Detroit Public Theatre, which runs through Nov. 3, is set in 1949 in Detroit's Black Bottom and Paradise Valley, minutes before both would be leveled in the name of urban "renewal" and freeway construction.

Morisseau, who grew up in Detroit but now lives in Los Angeles, focuses on Blue, a trumpeter who owns a jazz club in doomed Paradise Valley, the fabled, one-time cultural heart of Detroit's African-American community. Blue knows what's coming, and debates selling and getting out while he still can.

"Blue is a complicated character," Morisseau said, "and not necessarily a likable one. I wrote him to explore the tortured soul of the black artist at the time, dealing with the battle between racism and his own genius." 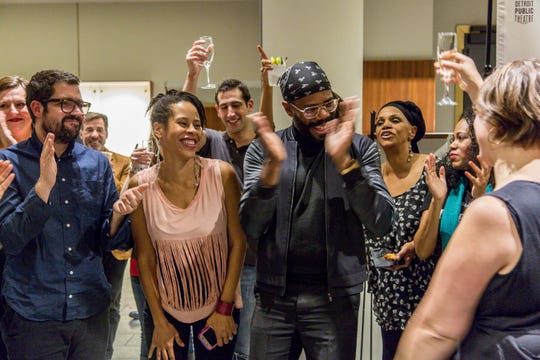 Morisseau, who won her own MacArthur genius grant, calls "Paradise Blue" a more spiritual play than her previous two set in the city, "Detroit '67" and "Skeleton Crew," but she gives spiritual a very specific definition.

In the late 1940s, long before our Freudian age, "Where was the tortured psyche to go?" she asked. "It had to go into art or jazz -- the levitation of jazz music was a spiritual place. Spirit doesn't have to be religious," Morisseau added, "just something that's out of body."

The women in "Paradise Blue," Pumpkin and Silver, echo the pair of polar opposites audiences came to love in "Detroit '67." It's a female dichotomy Morisseau finds both thematically useful and fascinating.

"I'm interested in exploring different sorts of womanhood," she said, "and whether they're there to support each other or not." In this case, Pumpkin is the good girl, compliant, well-liked and a little abused. Silver, by contrast, is a sexpot who knows how to make men heel.

"A woman firm in her voice and power is not to be trusted!" Morisseau said with a laugh. "And in 'Paradise Blue,' the one who doesn't have power is the one everyone trusts and loves. But what happens when she does come into her power?"

Then there's the physical domination. "What about the very real, unchecked abuse that was common to this era? There was no legislation, and no awareness of domestic violence as a problem," she said. "So my characters are negotiating that as well."

And whether they know it or not, they're about to negotiate becoming refugees in their own town, as Mayor Albert Cobo's hostile plans to expunge the city's principal black neighborhood were taking shape.

It's hard, Morisseau argues, to measure what was lost.

"When a community is displaced, you lose its soul," she said. "You lose the community's foundation, its values. And in the case of Paradise Valley," jammed with clubs and bars, "you lose entrepreneurship, and a model for black independent businesses to thrive."

As far as she knows, none of Morisseau's relatives were among the thousands scattered by the bulldozers. But she still mourns the loss.

"You lose the culture of that area. With Paradise Valley in particular," Morisseau said, "you lose the legendary jazz scene. Now we're known for Motown. We lost being a hub for jazz."

As for the gentrification happening today, Morisseau is of two minds. She acknowledges that places are going to change, and that development is necessary.

Still, she wonders whether Detroit could become a model for social change that doesn't involve the dismissive cruelty that ordinarily accompanies upheaval.

"People don't like the word 'gentrification,'" Morisseau said. "They don't like to think it's violent, but it is. The problem with gentrification is you have no idea whose graves you're stepping over, or how sacred that house was for the people who came before you."

In town for the lead up to her play, Morisseau roots for Detroit to take a more enlightened path than most other cities.

"Places are going to change," she said, "but they don't have to change with disgust. They can change with inclusion, and not with dismissal of the people and their history."