Honor and celebrate love ones lost and burn a few hundred calories while you're at it this weekend at Run of the Dead.

Organized by the Southwest Detroit Business Association, this 5K and 10K run loops through the historic Holy Cross and Woodmere cemeteries Saturday morning. It's the last day of Día de Muertos, or Day of the Dead, a Mexican holiday for remembering friends and family members who have died.

A jog through a quiet final resting place can be very peaceful, but what also makes this run unique is participants are invited to dress up in Day of the Dead regalia. That means flowers, and skull face paint, but not Halloween costumes.

Registration is open now online, or sign up the morning of as early as 7 a.m. Step off is 9 a.m. Pre-race activities include free face painting, live music and an address about Day of the Dead customs from Bishop Donald Hanchon of the Archidiocese of Detroit, who is also a resident of the neighborhood.

Registration fees will help fund COMPÁS, the Center of Music Performing Arts Southwest Detroit. Musicians from the organization will perform at the start of the race.

"It a program of the Southwest Detroit Business Association that we’ve run for over a decade and it serves youths in the community, primarily Spanish-speaking youths," said Robert Dewaelsche of the SDBA. "It really fills a need for them to celebrate and really share their own culture."

Dewaelsche said nearly 500 people showed up to run last year, and they expect Saturday's number to exceed that due to nice, crisp fall weather. 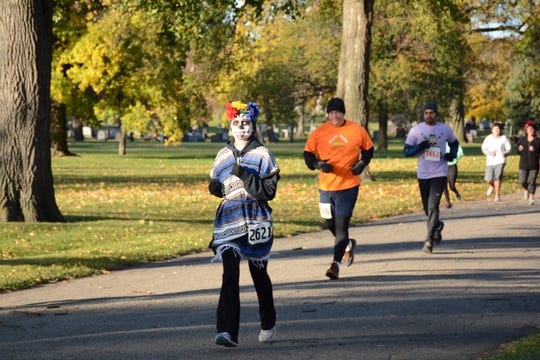