On Thursday, the Detroit Symphony Orchestra announced a plan to put a musical instrument in the hands of any Detroit child who wants to learn to play.

It's a visionary plan that still has a million details to be ironed out.

But if the Detroit Symphony Orchestra has its way, in a couple years every single Detroit schoolchild who wants to play an instrument will get one, free of charge, as well as access to musical instruction.

Detroit Harmony, as the project is called, represents a bid to dramatically expand music education throughout the city, one that hopefully will generate demand for an entirely new workforce of music teachers and craftsmen to repair and refurbish used instruments.

"It’s a big, bold idea that will require big, bold commitments," said Mark Davidoff, DSO board chairman. "But we’re full throttle behind it, and think we’re onto something very, very important."

Detroit Harmony will be open to any K-12 student in public, private and charter schools throughout the city. 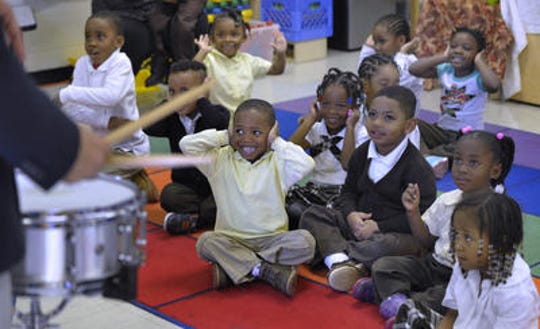 A Detroit Symphony Orchestra drummer visited students at Palmer Park Academy in 2015. The DSO on Nov. 14, 2019, announced a new program called Detroit Harmony to put an instrument in the hands of any Detroit student who wants one. (Photo: Detroit News files)

The DSO has just completed the first phase of funding the program, and is currently looking for a project director to lead the next 18 months of planning before Detroit Harmony officially launches.

Major support for the initiative was provided by the Ralph C. Wilson, Jr. Foundation and the Max M. and Marjorie S. Fisher Foundation.