The 1983 Disney Channel original movie isn't yet available on Disney's new streaming service, but its Detroit-born writer-director is holding out hope 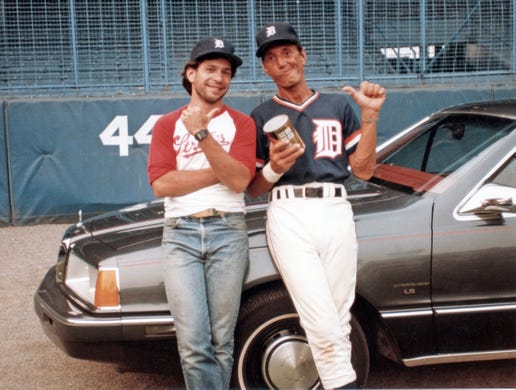 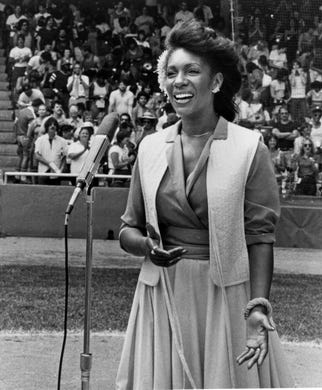 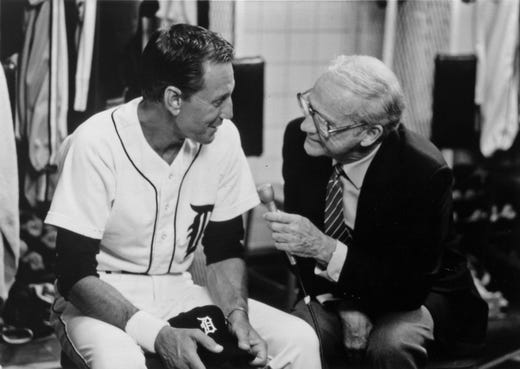 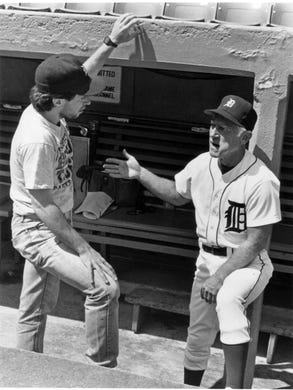 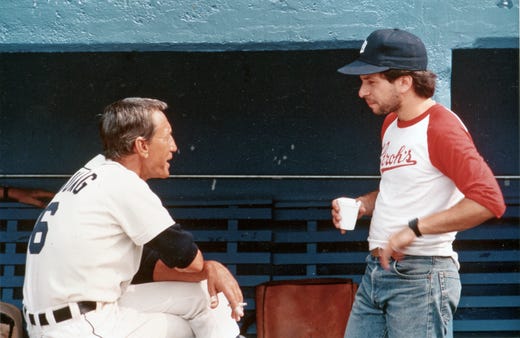 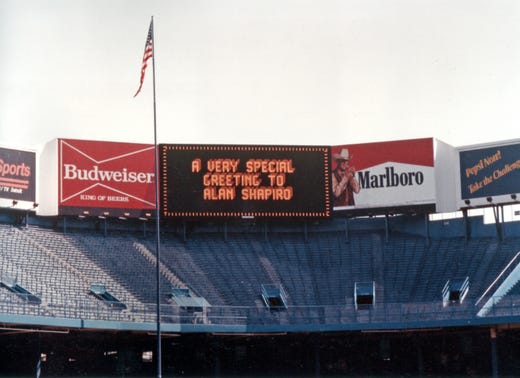 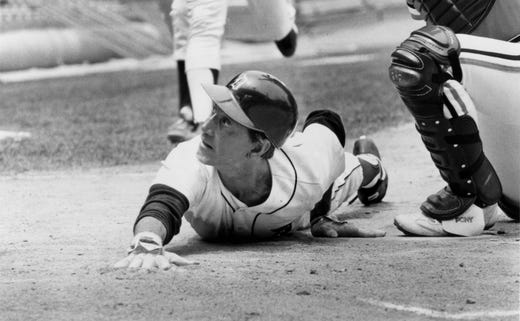 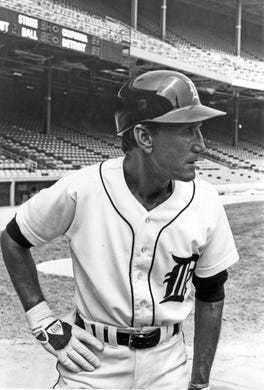 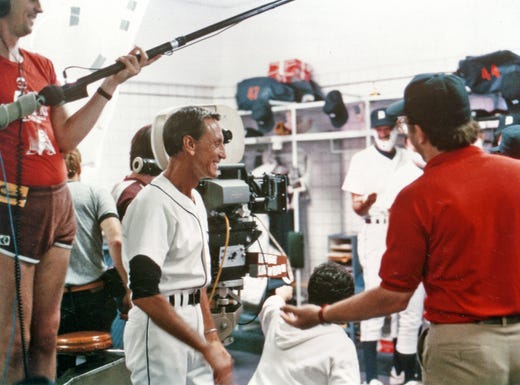 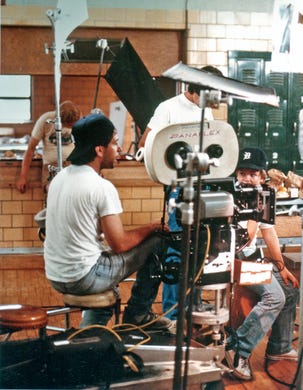 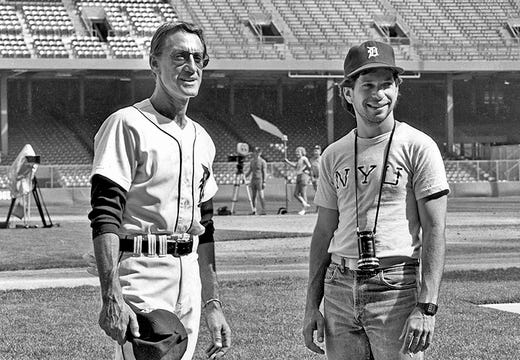 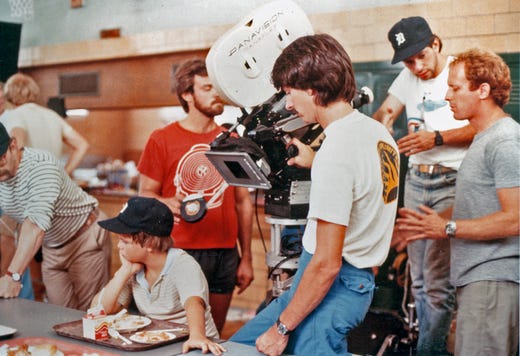 Justin Henry is filmed during a scene for "Tiger Town." Alan Shapiro
Fullscreen 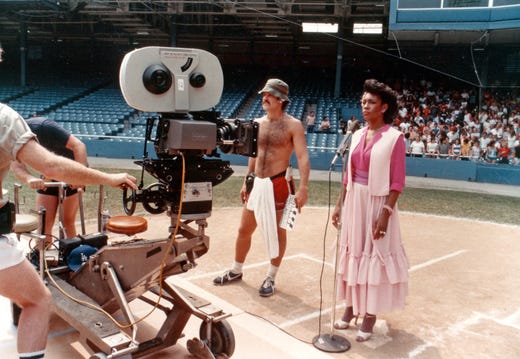 Mary Wilson of the Supremes films at Tiger Stadium during the "Tiger Town" shoot in summer 1983. Alan Shapiro
Fullscreen 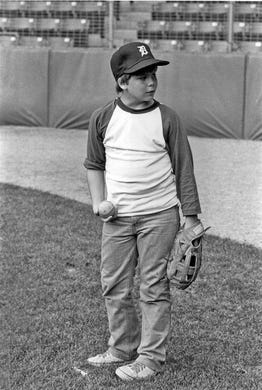 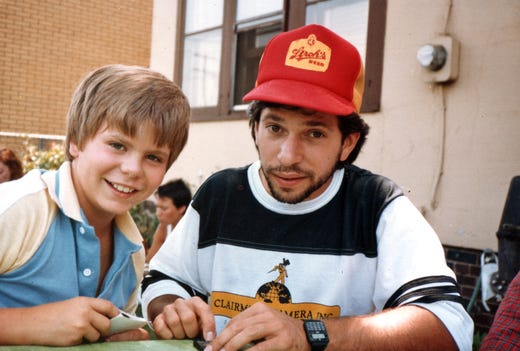 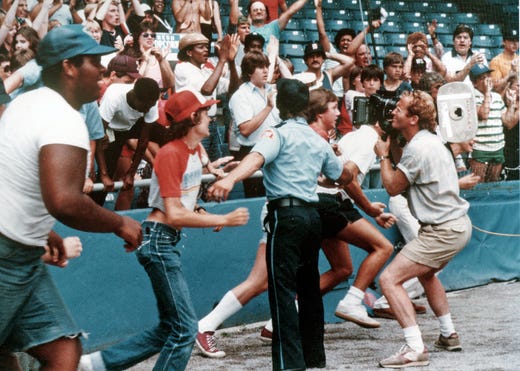 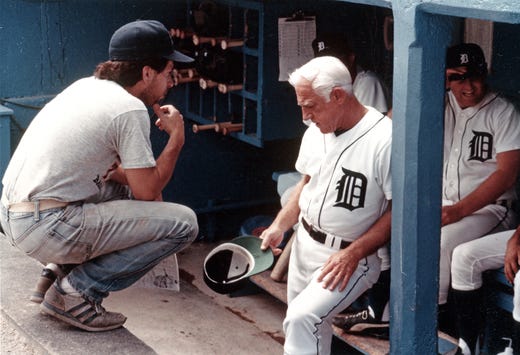 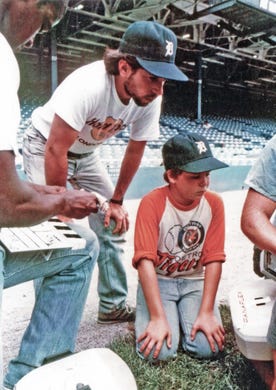 The 1983 Disney Channel original movie isn't yet available on Disney's new streaming service, but its Detroit-born writer-director is holding out hope

When Disney+ debuted Tuesday it boasted hundreds of titles from Disney's vast library of archives, a veritable treasure trove of nostalgia for adults looking to stream their childhoods.

One production noticeably absent from the lineup — especially for Metro Detroiters of a certain age — is "Tiger Town," the 1983 Disney Channel original movie about a young boy who wills the down-and-out Detroit Tigers to the American League pennant.

The movie stars Roy Scheider as aging Tigers veteran Billy Young, who is slumping through his final season in the majors; Academy Award-nominee Justin Henry ("Kramer vs. Kramer") as Alex, a fan who believes in Young and his beloved Tigers; and perhaps most importantly, a still-in-its-prime Tiger Stadium, rendered so lovingly you can practically smell the peanuts in the stands and the freshly cut grass in the outfield.

So why is it not on Disney+? It's not a simple case of someone forgetting to upload it: while Disney+ may seem to be home to every Disney movie ever, its catalog of 1980s Disney Channel original movies is, thus far, largely missing from the service. (Titles such as "Gone Are the Dayes," "The Blue Yonder" and "The Parent Trap II" are also nowhere to be found; an inquiry sent to Disney was not returned as of press time.)

"Tiger Town" writer, director and native Detroiter Alan Shapiro, who based the film on his own love of the Tigers — especially during their 1968 championship run — would love to see the film added to the Disney+ lineup.

"It's not going to make me any money or anything," Shapiro said Thursday from his home in Pasadena. "It would just be sweet to have it up there." 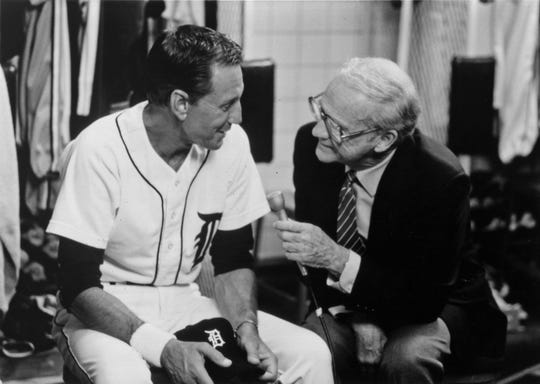 Fans with fond memories of "Tiger Town" haven't had access to it in years, outside of worn-down VHS copies, which can be found on eBay for $49.99, and a grainy version uploaded to YouTube several years ago.

Shapiro says that plans for a DVD release stalled over a rights issue relating to "Go Get Em, Tigers," a song recorded by Artie Fields (with lyrics by famed Tigers broadcaster Ernie Harwell) for the Tigers' 1968 championship season that plays over a key montage in the film.

Shapiro has fond memories of making the film, which he shot in summer 1983 in and around Corktown and Tiger Stadium. Shapiro, who was 25 at the time, had an 18-day shooting schedule, a budget of $900,000 and the full cooperation of the Tigers, who gave him free reign over the stadium.

"We could shoot wherever we wanted," says Shapiro, now 62. "They never said no to anything." 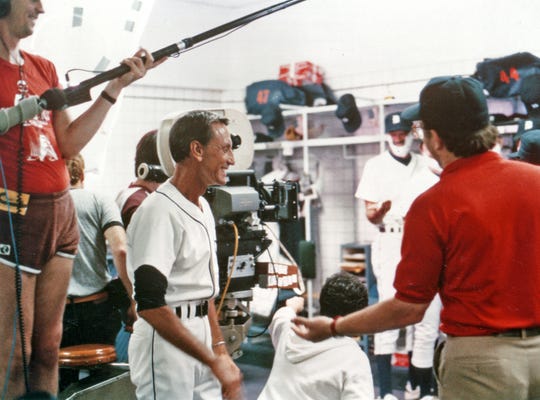 Shapiro and his crew filmed crowd shots during Tigers home games and shot on the field during away games, using up to 600 extras to fill in the stands. At the time, Tiger Stadium seemed immortal; at one point, Alex's father (played by Ron McLarty) says to his son, "this place will be here forever. You'll be taking your own kids here before you know it."

"That place was like a temple. It was such a special place," says Shapiro. "('Tiger Town') is a great document of Tiger Stadium, showing all the quirks of the place."

Harwell and ex-Tigers skipper Sparky Anderson are among those who appear as themselves in the movie; former Detroit sportscaster Ray Lane and Mary Wilson of the Supremes also make appearances.

Outside of Corktown, Shapiro filmed in Eastern Market, Royal Oak and Ann Arbor, as well as at the Ford Michigan Assembly Plant. Shapiro shot several scenes at Pasteur Elementary School, which he attended as a child raised near Seven Mile and Livernois. 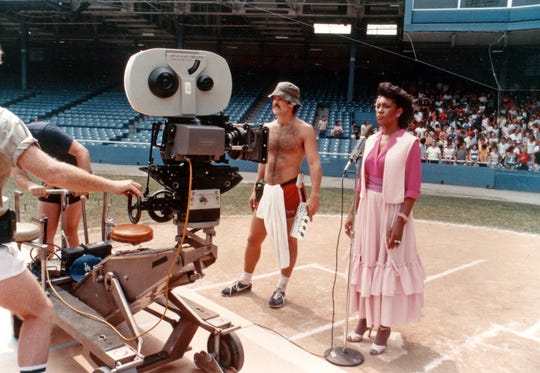 Mary Wilson of the Supremes films at Tiger Stadium during the "Tiger Town" shoot in summer 1983. (Photo: Alan Shapiro)

"For me, there was a lot of secret sentimentality in the movie," says Shapiro, who grew up worshipping Al Kaline the same way "Tiger Town's" Alex does Billy Young. (Young's character is loosely based on Kaline.)

Shapiro had his own routines he would go through to help his Tigers win from afar, and "Tiger Town" is an ode to the superstitions that surround baseball and the way fans believe, deep down, they have an effect on the outcomes of the game.

Shapiro began making films on his Super 8 camera when he was 13 years old. By 15, his family had moved to Long Island, and Shapiro was in and out of trouble through high school. He carried a D+ average but on a lark he applied to film school at NYU and was accepted into the program after the department head took mercy on him, he says. He flew through his schooling.

After graduation, he wrote and directed a couple of TV movies, which led to the "Tiger Town" gig. Disney originally wanted to shoot it at Dodger Stadium with a fictional baseball team, but Shapiro fought to make it specifically about the Tigers and to shoot in Detroit, and he won. 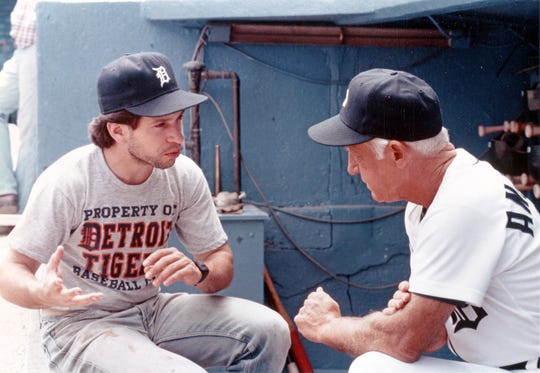 His crew included cinematographer Robert Elswit, who would go on to be Paul Thomas Anderson's director of photography and won an Oscar for "There Will Be Blood"; costume designer Gary Jones, who went on to be nominated for an Oscar for "The Talented Mr. Ripley"; and production designer Neil Spisak, who later worked on "Heat," "Face/ Off" and Sam Raimi's "Spider-Man" films.

On-set photographer Linda Solomon remembers it as a "grueling" shoot filled with long, hot days. She recalls the day Al Kaline visited the set to meet Scheider, who had stripped down to his sheer Jockey underwear and was sitting in the middle of the field. Kaline reached down to shake the hand of Scheider, who didn't stand up because of his underwear situation, and Solomon captured the moment on film. "I use that photo quite a bit at public speaking events," she says.

"Tiger Town" was the first original film produced for the then-new Disney Channel, which launched in April 1983. It later aired on ABC as a Sunday Night Movie, and earned a small theatrical release in Metro Detroit, including a run at the Maple Theatre in Bloomfield Township. In 1984, it earned a CableACE Award for Best Dramatic Film. 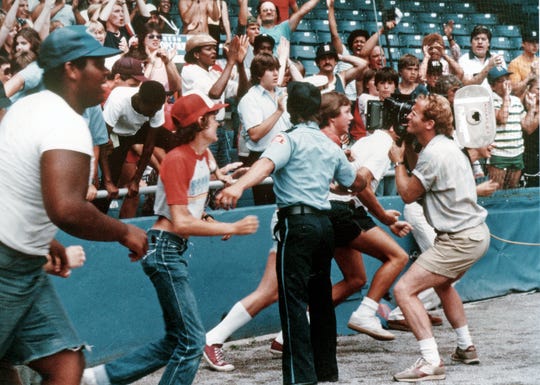 The movie was also seen as something of a good omen for the Tigers franchise; the following year, the team won the World Series, and Shapiro was gifted with tickets to every playoff and World Series game as a thank you from the Tigers organization.

Following "Tiger Town," Shapiro made another movie for Disney, "The Christmas Star," which actually is on Disney+. He went on to direct Alicia Silverstone in her 1993 screen debut "The Crush," which was based on a personal experience and resulted in a lawsuit after Shapiro named Silverstone's character after the real life subject. He followed "The Crush" with the commercially underperforming "Flipper" in 1996, and Shapiro says he's been locked in "director's jail" ever since.

He continued to write films — "I did a lot of stuff that never got made, but I got paid," he says — but his writing career allowed him to stay home and be "Mr. Mom" to his two sons, who are now out of college. 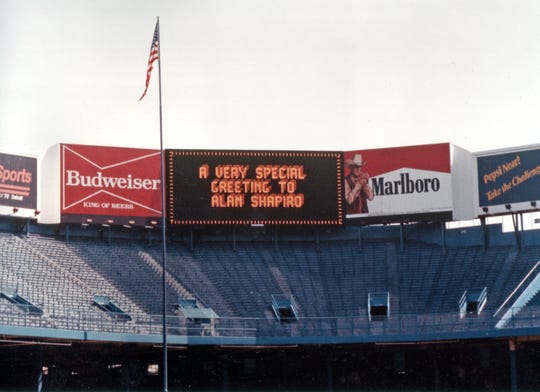 "Tiger Town" still holds a special place in his heart, and he's hoping it can be seen again so audiences can relive the majesty of Tiger Stadium and new fans can discover a lost piece of Tigers nostalgia.

It's up to Disney, but Shapiro is still hopeful. Like the movie says, it's never over until the final out.