Detroit —  He was only 2 years old when he first saw his grandpa dance the Boogie Woogie.

Ron Ford Jr. was captivated watching his grandfather, Lester Payne, 86, execute the form of swing dance accompanied by blues piano-playing that became popular in the Deep South in the 1920s, and is kept alive today on YouTube videos.

Ford’s life path was sealed. He simply had to dance. 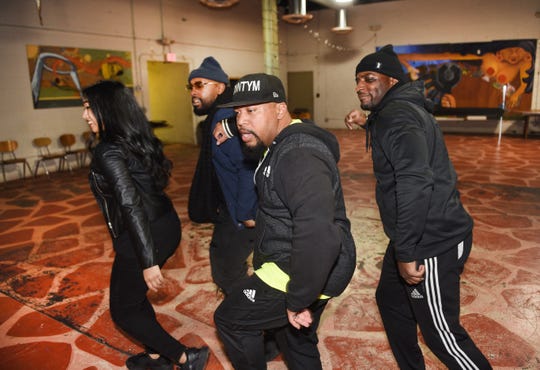 “My grandpa would take me around his friends to show them how I could dance the Boogie Woogie, and his friends would laugh and applaud, and were amazed I could do the dance so well at 2 years old,” said Ford, 49, of Detroit, who goes by the name, QWNTYM.

From the Boogie Woogie to the Robot, the Wave, a brief interlude of break-dancing and other trendy dances, Ford eventually discovered the Jit and finally, the dance that set his heart aflame while attending Southeastern High School. 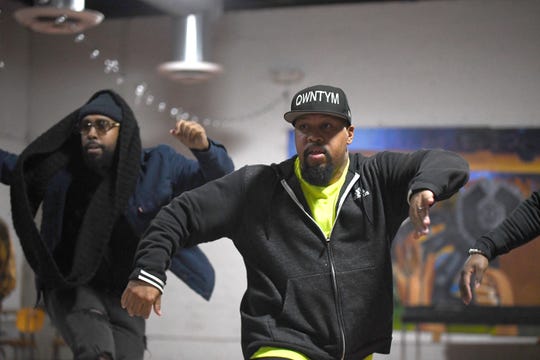 Ron Ford Jr. (right) rehearses with Michael Manson in the Funkateer style dance at the Cass Corridor Neighborhood Development building. Ford Jr., a Kresge Artist Fellows, is a grant recipient in choreography, rehearsing for a mini-concert to be held November 23rd at the International Institute in Detroit. He is an expert in the Funkateer style of Detroit dance from the 1970s, or as he calls it, just the Funk. (Photo: Max Ortiz, The Detroit News)

("Give Up the Funk," by Funkadelics)

“Oww, we want the funk, we gotta have that funk

Oww, we want the funk, give up the funk”

The old-school clarion call of the 1970s.

Funk as in the Funkateers, an Inkster dance group from that era. Funk as in Parliament and the Funkadelics. Funk as in Bootsy Collins Rubber Band, the disciples of Funk.

He desires for others, especially high school students, to learn to dance the Funk. To that end, he applied for, and was chosen from hundreds of applicants to become one of 36 winners of the 2019 Knight Arts Challenge Detroit. Now in its seventh year, this community-wide John S. and James L. Knight Foundation initiative seeks to find and fund the best ideas for engaging and enriching Detroit through the arts.

Detroiter Ron Ford Jr. rehearing his routine for a mini-concert to be held Nov. 23 at the International Institute in Detroit. The Detroit News

The 2019 challenge winners represent a broad variety of disciplines, including film, theater, literature and music.

Ford was awarded $15,000 to produce “The Funk Lives!” It is a series of free workshops aimed at Detroit area high schools to cultivate an interest in Funkateer, Detroit’s own urban dance.

He says he wants to spread the joy.

“I want to do my part as a dancer and help spread the dance that brought me such joy,” he said. “I want to share with others to pick up the torch and keep it moving because I don’t want it to die out.” 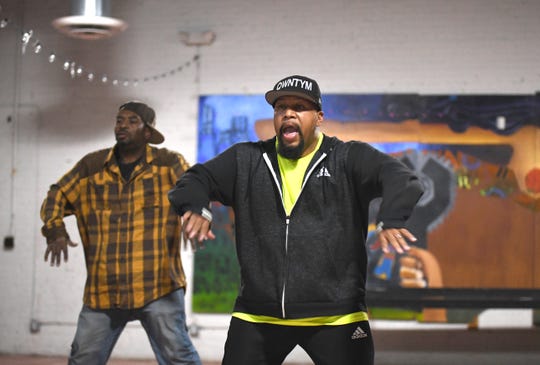 Ron Ford Jr. (right) rehearses with Juan Jones in the Funkateer style dance at the Cass Corridor Neighborhood Development. Ford Jr., a Kresge Artist Fellows, is a grant recipient in choreography, rehearsing for a mini-concert to be held November 23rd at the International Institute in Detroit. He is an expert in the Funkateer style of Detroit dance from the 1970s, or as he calls it, just the Funk. (Photo: Max Ortiz, The Detroit News)

But classes have not yet begun. First, he is presenting a free show, a mini-concert of dance and his original music, “Jit the Funk Up and Dance,” to be held Saturday at the International Institute of Metropolitan Detroit, near the Detroit Institute of Arts, at 111 E. Kirby St.

“It is for all ages,” Ford said. “Detroit history and culture for all.”

He will be accompanied by four other members of his dance group, the Unstoppables, who first came together in high school.

But he wants to make it clear, this is not the same Funk from the 1970s.

“It has evolved and looks different because it has changed throughout the years,” he said. “Back in the day, it was danced with slower music. And it had more stop and go (pop-lock) movements. Ours doesn’t focus on the pop-locks, but rather more on fluidity.”

Jeffrey Healey knows something about the original moves. He is a member of the Funkateers.

“The original Funkateers were Ed Miller, Demon Ellerson, Tony Warren, Michael Kelley and Tony Lacey,” he said during a phone interview from Silver Springs, Maryland, where he said he works as a contractor with Homeland Security. “Ed Miller created it in the early 1970s and taught it to everybody else.”

Healey, 54, said once they appeared on the popular local dance TV show,“The Scene,” it took off.

Asked what he thinks about Ford’s mission, he said, “I think it’s a great idea and I think he’s doing a great job,” he said. “The style of dance he does now is faster though because they totally speeded up the music with a lot of fast footwork.”

He added, “But it still warms me because they are trying to do their best with what they remember.”

But one cannot talk about the dances of the 1970s without asking the opinion of Fast Freddy, the icon of all things dance, who has taught ballroom, hustle and stepping classes for decades.

Fast Freddy, or Frederick Anderson, 73, was a staple on “The Scene.” The Scene, during that era, was where he said he did his share of both the jit and the Funk. 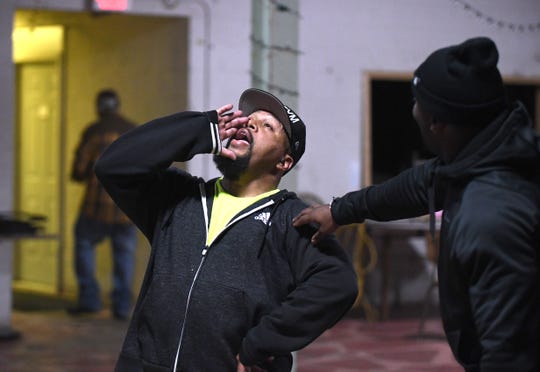 Walking from his car to a hustle class he teaches at the Northwest Activities Center in Detroit Wednesday, he said he “without a doubt” used to love both dances.

But, he said, although they’re still fun dances, they’ve morphed into a more competitive genre.

“I think they’re strictly dances for a young person,” he said. “They’re supposed to be fun dances, but in some cases, they’ve become too competitive, and play a big part in challenges, which can take away from the fun.”

Wayne State University dance  lecturer Karen Prall said she grew up in the 1970s, "and am happy to see it coming back."

"We used the term 'funk' widely back then, saying, for example, when watching somebody dance, 'he brought the funk.'"

She said it is a style of dance synonymous with Detroit.

"That is Detroit," she said. "When you go to Atlanta, Ohio, New York, Chicago, and they see fast foot moves, they'll say, 'Oh, that's Detroit style.'"

‘Jit the Funk Up and Dance’

There will be an after-party following the event