The Detroit Youth Choir and former Mayor Dennis W. Archer will act as Grand Marshals for the 2019 Thanksgiving Day parade down Woodward Avenue.

As far as Tony Michaels, president and CEO of The Parade Company, is concerned, it will not -- repeat, will not -- rain on Thanksgiving. Because if it does, Michigan State basketball coach Tom Izzo and the parade's other Big Heads are in deep trouble.

"They're huge papier-mâché heads," Michaels said. "They can't walk in the rain, so we are not going to have rain." Perhaps the weather gods are listening. On Monday, the Thanksgiving forecast called for clouds, but, allegedly, little chance of rain.

All of which is excellent news for for the 93d-annual America's Thanksgiving Parade Presented by Art Van,  as it's officially known, which will kick off at 9 a.m. in front of the Detroit Institute of Arts with seven new floats and of course, the spanking-new Izzo Big Head, along with Big Heads pals Aretha Franklin, Magic Johnson, Bob Seeger and the rest.

And naturally, of course, Santa Claus will also put in an appearance, starting at the DIA around 10 a.m.

Children play in bubbles during the unveiling of the new Art Van Thanksgiving Day parade float, titled, Christmas Under The Sea, at the Parade Company, in Detroit. (Photo: David Guralnick, The Detroit News)

Floats debuting this year include "Christmas Under the Sea" by Art Van, featuring a 40-foot-long whale, and "Creating Tomorrow Together" from Ford, which stars a 28-foot-tall recreation of the old Michigan Central Depot the automaker is currently renovating.

Can't get down to Detroit for the fun? WDIV-TV (Channel 4) will start coverage at 6 a.m.

And just how does coaching legend Izzo feel about graduating to Big Head status?

"Tom is so pumped," Michaels said. "I just spoke to him. He's elated to join Aretha and the other Big Heads. I told him, 'Tom, this is the big time.'""

But back to the Youth Choir, who dazzled the country and took second place Sept. 18 in America's Got Talent -- they will perform at 10 a.m. sharp when the parade enters what Michaels terms "the TV Zone" on Woodward just a half block south of Gratiot.

Other stars dotting the parade will include 2019 golf champion Nate Lashley -- who will be chipping small rubber balls into the crowd from the Rocket Mortgage Classic float -- 1984 Tigers World Series champs Lance Parrish and Dave Rozema, and the 14-year-old star of "Black-ish," Issac Ryan Brown.

The athletically inclined will get an early start in the Strategic Staffing Solutions Turkey Trot, which anticipates some 17,000 runners, many in fabulous costumes. The 10K and one-mile runs will kick off Thursday at 7:30 a.m. at the TCF Center (formerly Cobo Hall), and the 5K at 8:30 a.m.

If you've pre-registered online, you can pick up your racing packet -- and register, if necessary -- at Room E (formerly the Michigan Room) in the TCF Center Wednesday from noon-7 p.m., and Thanksgiving Day starting at 6 a.m.

Baby strollers are welcome, but please no bikes or dogs. 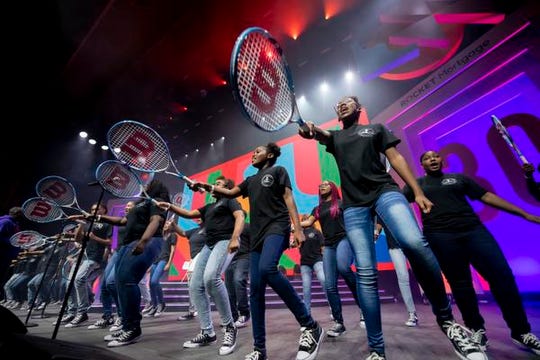 The Detroit Youth Choir will perform at 10 a.m. Thursday when the parade enters “the TV Zone,” just a half-block south of Gratiot and Woodward. (Photo: David Guralnick, The Detroit News)

But back to the Detroit Youth Choir -- they'll perform for 185 TV stations around the country for about three minutes, Michaels said. The question on everyone's mind, of course, is what will they sing?

"I can't tell you what song they're performing," he said, drawing a line in the sand.

9 a.m. - Parade kick-off in front of Detroit Institute of Arts