Nominations for the 77th Golden Globes will be announced bright and early Monday morning. And to answer the year’s most burning question: Hollywood Foreign Press Assn. members did see an unfinished version of “Cats” in time to, in the words of wise Old Deuteronomy, judge it by its soul.

May God have mercy on us all.

Predicting what the 87 active voting members of this group will do is a fool’s task, which means you, dear reader, have the perfect guide for the job. Let’s get to it! 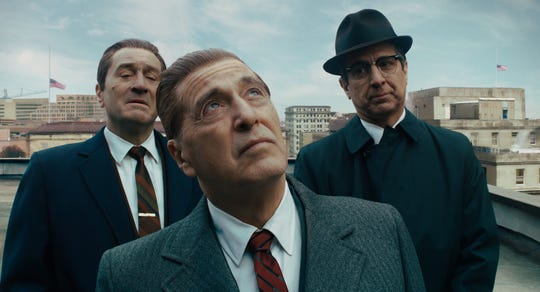 On the cusp: “Ford v Ferrari,” “Joker,” “A Beautiful Day in the Neighborhood,” “Bombshell,” “Richard Jewell”

Last year, “Black Panther” became the first Marvel movie to earn a nomination in this category. “Joker,” a DC Comics adaptation, could make it two in a row for genre fans, particularly if Hollywood Foreign Press Assn. voters have an eye on the potential TV ratings bump that a healthy “Joker” presence might deliver. Then again, seeing the “Bombshell” women – Charlize Theron, Nicole Kidman and Margot Robbie – seated together at a table could accomplish the same thing.

Mirren, starring opposite Ian McKellen in the cat-and-mouse thriller “The Good Liar,” would be a surprising choice. But the HFPA loves her, handing the English actress a whopping 15 nominations for her career. Put it this way: The group feted her two years ago for “The Leisure Seeker.” You say you don’t recall that movie? Exactly.

I’m going to keep this list short, because I think these are the only seven actors who could earn a nomination. Phoenix, De Niro and Driver are locks. Banderas delivers a career-best performance in “Pain and Glory,” and I’m hearing “The Two Popes” played well with the group. That leaves Bale and Sandler on the outside looking in.

“Once Upon a Time … in Hollywood”

“Dolemite Is My Name”

In the good old days, “Cats” would be a shoo-in, even if the final movie ends up being as horrific as the trailer portends. The HFPA nominated “The Phantom of the Opera” here. And “Burlesque.” “Evita” won! Members have long had a song in their hearts and a lavish array of gifts in their back pockets. Sadly, those days seem to be gone. The HFPA has acquired the sheen of respectability. Mr. Mistoffelees might just be left at home this year, forced to hate-watch the show while feigning indifference, per the nature of his species.

De Armas, a star in the making, gets a boost from the commercial success of “Knives Out.” Awkwafina will end up winning this award without question.

Eddie Murphy, “Dolemite Is My Name”

Leonardo DiCaprio, “Once Upon a Time … in Hollywood”

Murphy won the last time he was nominated, taking the supporting category for “Dreamgirls.” That victory was supposed to propel him to his first Oscar, but he lost to Alan Arkin (“Little Miss Sunshine”) and pretty much spent the next 12 years wandering from one bad movie to another. The likable “Dolemite” represents his comeback, and he’ll probably leave this year’s Globes with another trophy.

When it comes to TV, this group has the attention span of an Irish setter in a crowded dog park. First-year programs had won this category for four straight years until “The Americans” prevailed in January – on its first nomination – for its departing season. It makes absolutely no sense, which is a phrase you should just put on repeat when it comes to the HFPA and television. I mean, there’s a good chance “Game of Thrones” will be cast aside for another HBO drama like “Euphoria” or “Watchmen.” Out with the old; in with the shiny new toy!

Lead Actress in a Television Drama

There’s an embarrassment of riches here, meaning that Oh, last year’s winner, might not even be invited – which isn’t that rare, as the HFPA churns, churns, churns its TV categories. However the race shakes out, Colman will be a heavy favorite to win a year after she prevailed on the film side for her lead turn in “The Favourite.” Who’s up for another alcohol-fueled acceptance speech?

Lead Actor in a Television Drama

Kevin Bacon, “City on a Hill”

On the cusp: Jonathan Groff, “Mindhunter”; Sterling K. Brown, “This Is Us”; Forest Whitaker, “Godfather of Harlem”; Kit Harington, “Game of Thrones”

The HFPA pretty much ignored “Succession” last year, giving the HBO series just one nomination for supporting actor Kieran Culkin. The show’s second season really put it in the cultural conversation though, and Globes voters – always eager to beat the Television Academy to the punch – will likely embrace it in a big way this year. Strong and Cox will be among the beneficiaries.

“On Becoming a God in Central Florida”

On the cusp: “The Kominsky Method,” “The Marvelous Mrs. Maisel,” “Schitt’s Creek,” “Veep,” “The Good Place”

“Glee” is the last show to win this Globe in consecutive years (2009-10), meaning that “Kominsky,” the reigning champ, shouldn’t feel too comfortable. Look for voters to again fall hard for new programs (“Central Florida,” “The Politician”) at the expense of long-running series, though the HFPA never liked “Veep” that much in the first place.

Lead Actress in a Television Comedy

Kirsten Dunst, “On Becoming a God in Central Florida”

No Louis-Dreyfus for the last season of “Veep”? Sentiment could prevail, but the HFPA did not nominate her in her previous year of eligibility and has never given her this Globe. (Her only win came 25 years ago for “Seinfeld.”) Unless the group has a dramatic change of heart – as it did last year with “The Americans” – Louis-Dreyfus can probably skip this party.

Lead Actor in a Television Comedy

Paul Rudd, “Living With Yourself”

Douglas won last year, and he and Hader will be the only holdovers. Gervais agreed to host the Golden Globes again this year, meaning the HFPA likes him enough to probably give him a seventh nomination, too. If he made it in for “Derek,” it’s not a stretch he could earn a nod for the indulgent “After Life.”