It's not often something you studied in your college Art History class turns up at your local auction house, but that's precisely what's happening this weekend when DuMouchelles puts two small bronzes by French sculptor Auguste Rodin on the block. 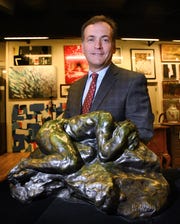 DuMouchelles auctioneer and appraiser Robert DuMouchelle with the bronze sculpture "Le désespéré" by Auguste Rodin, which the auction house will put on the block this weekend. (Photo: Daniel Mears, Detroit News)

The two statues are owned by Robert Schweizer of Ann Arbor, whose family ran Schweizer's German Restaurant just east of Renaissance Center from 1862-1991.

As far as DuMouchelles President Joan D. Walker knows, these are the first Rodins they've ever come across. Indeed, she noted, it would be rare for any auction house anywhere to stumble on such a treasured find.

"To my way of thinking," Walker said, "it'd be quite unlikely to find Rodins in a personal collection." All in all, she added, "this is one of the most exceptional ones we've auctioned this decade."

Also included in the Schweizer lot is glassware by Tiffany, Murano, Lalique and Steuben, and sterling silver by Gorham and Georg Jensen.

Both Rodins are "reductions," Walker explained, or small castings of larger works produced at Alexis Rudier Fondeur in Paris, one of the foundries authorized by the French government to handle the master's sculptures.

"The 'Jean d'Aire' that DuMouchelles has was originally made in 1895," said Bernard Barryte, former curator of European art at Stanford University's Iris & B. Gerald Cantor Center for Visual Arts, which has one of the best Rodin collections in the U.S.

DuMouchelles believes the Schweizer castings were both produced in the early 1900s, though don't have a hard date for either.

Schweizer, who is ailing, was not available for interview.

Detroiters, of course, are more familiar than most with Rodin because of "The Thinker" in front of the Detroit Institute of Arts, officially the third casting of the larger-than-life statue. Museum benefactor Horace D. Rackham donated it to the museum after buying it from a German collector in 1922.

According to its website, the DIA has seven other Rodin bronzes, including "The Death of Abel." None, however, is as huge as "The Thinker."

The story behind "Burghers of Calais," which New York's Metropolitan Museum calls "probably the best and certainly the most successful of Rodin's public monuments," comes out of the Hundred Years War (1337-1453) between England and France.

In 1347, six leading citizens or "burghers"  in the besieged city offered themselves up as human sacrifices if the English king would spare the rest of Calais. King Edward III, agreed, intending to behead them.

However, his wife, Queen Philippa, interceded and prevailed upon him to spare the noble volunteers.

The auction at DuMouchelles will start Friday at 1 p.m., Saturday at 11 a.m. and Sunday at noon.