The SmackDown Women's Champion is no longer hugging fans, part of a 'much-needed' character change, she says

The SmackDown Women's Champion is no longer hugging fans, part of a 'much-needed' character change, she says

It's been quite a decade for Bayley, who in 2010 was wrestling on the indie circuit and is now closing 2019 as the Women's Champion in the largest professional wrestling organization in the world. 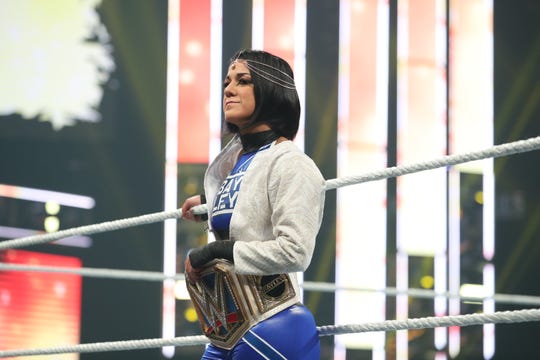 She's in the midst of a sweeping character change, and has gone from the fan favorite "babyface" — that's wrestling talk for good guy — who is known for her cheery attitude and for hugging members of the crowd to a moody, brooding "heel," or villain. The transformation had been in the works for some time and was completed on the Oct. 11 episode of "SmackDown."

That night, "I felt like I was in a dream," says Bayley, on the phone from Milwaukee prior to a "SmackDown" taping earlier this month. She hit the stage at the entrance ramp to the ring and slashed her Bayley Buddies, the colorful inflatables that wave wildly in the air when she makes her arrival, with several swings of a razor blade.

Perhaps more tellingly — and more personally significant for the 30-year-old Northern California native — she had snipped off her signature ponytail, which had come to represent her upbeat, happy-go-lucky demeanor and childlike attitude toward her character.

"It felt great," says Bayley, born Pamela Martinez, who with the help of "a very trusted hairstylist" cut her hair that day at Las Vegas' T-Mobile Arena before the show.

"I knew what I wanted to do and I knew what I needed to do. But the actual snip of the ponytail, I was a little in shock," says the two-time SmackDown champ. "My hair was the longest I've ever had it, and I've had that freakin' ponytail for seven years. The last time my hair was this short, I was 10 years old."

It was as a child in Newark, California, near the southern end of the San Francisco Bay, that professional wrestling first entered her life.

Her father, whose love of the art of body slams and suplexes was passed down to him from his mother, had tried to get her little brother into wrestling by watching on the family TV. "I paid no attention, I would walk from room to room," says Bayley. But that changed the first time she saw Randy "Macho Man" Savage on screen.

"I stopped, my head turned, and I was like, 'oh, gosh,' that's cool," she says. From there she became obsessed with wrestling; in middle and high school when she had to write papers, she would always loop them back to wrestling, and she learned geography by following WWE television broadcasts week-to-week across the U.S. "It consumed me," she says.

By the time she went to her first independent wrestling show, she was hit with the realization that the people in the ring were mere mortals, just like her.

"I would be super close to the ring and I would stare at the wrestler's foot on that mat," says Bayley, who turned 30 in June. "It sounds so stupid, but I would think, 'I have a foot too! And I could stand there just like they're standing there! It just was different than seeing it on TV, and it all started coming together."

She trained in Big Time Wrestling in San Francisco and eventually made her way to Shimmer Women Athletes, an independent wrestling promotion in Chicago. From there she signed with WWE in 2012 and spent several years in NXT, the company's developmental league, before moving up to the main roster in 2016. 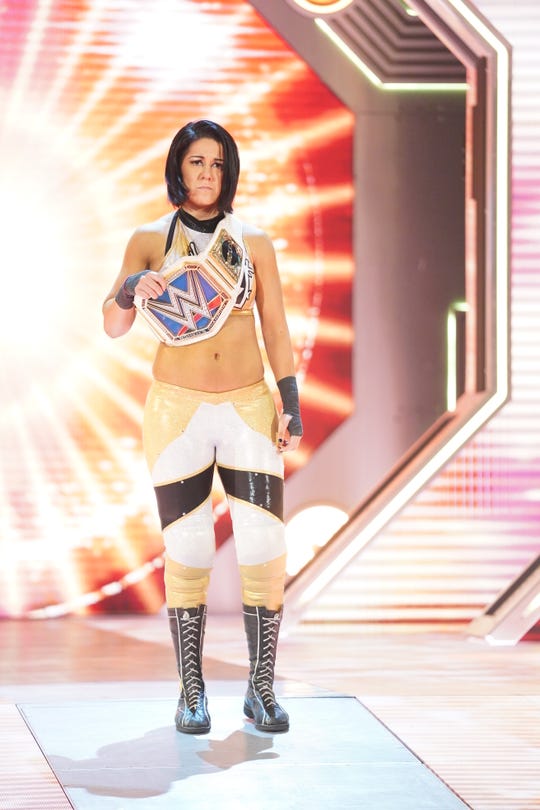 She spent years as a fan favorite and as a role model to young girls in the audience, and that connection to the fans is her strength as a character, says Dave LaGreca, the host of SiriusXM's daily pro wrestling talk show, "Busted Open."

"Wrestling, at the time, was lacking babyfaces, and she showed that even in the jaded internet wrestling environment, someone like that could really thrive and survive," says LaGreca. "When you saw her and saw her approach, her mannerisms and her body language, it felt like she truly was that person. And when you're showing that, you're going to connect with the audience."

Bayley played that role for a long time, and as she tells it, it was time for a change.

"Character-wise and personally, mostly personally, it was much needed," she says. "I really go off my emotions or what I'm passionate about at the time, and there came a point where I was like, 'I don't even know what I'm fighting for anymore.' That's when it hit me, and I was like, something needs to change. And that was it." 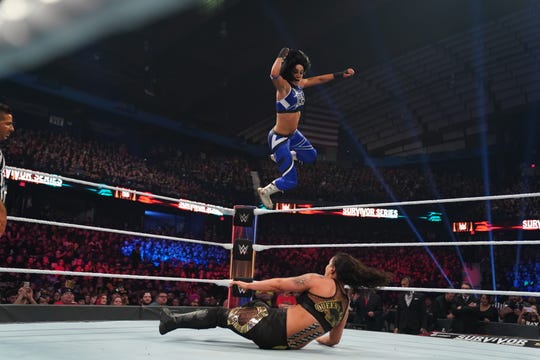 She says embracing the dark side of her character was like shooting down everything she'd built up over the past seven years, "but I'm just taking this leap and hoping this next chapter goes well," she says. "But I believe in myself and I trust that I won't let myself fall too far. If this doesn't work out as great as I'd hoped it would, I'll find a way to make it work."

Babyface or heel, good or evil, Bayley is committed to putting on a good show. She maintains an intense travel schedule — after hosting Christmas for her family with her fiance, indie wrestler Aaron Solow, in California on Wednesday, she wrestles in Cincinnati on Thursday before hitting Detroit on Friday — as well as an arduous workout regimen to stay in shape. On show days, she fits in a 90-minute morning crossfit workout before hitting the arena around 1 p.m.

She's used to the chaos of it all now, but sometimes she takes a step back and is wowed by how far she's come and the machine that she's a part of.

"I'm sitting in the arena right now, and if you could see how filled this place is, not with wrestlers, but with people building the stage, people putting out chairs, security yelling at people to put their phones away, it's crazy what goes on to put this show together for the fans," she says. "They don't know how much we really try to make the best show possible for them."