Cooking shows come and go, and vary in styles and approaches.

"America's Test Kitchen," however just entered it's 20th season of reliable and informative instruction on everything from preparing the juiciest fried chicken to knowing which springform pan is the best on the market. 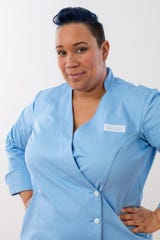 For the past few years one of the regular faces on the Emmy Award-winning public television series is Detroit's own Elle Simone, a test cook on the show who has also worked as a chef, culinary producer and food stylist. She brings a straightforward expertise to the show but isn't afraid to crack a joke, either.

"The experience we give you with food doesn’t just start and stop at the stove top," said Simone. "We are also talking about food quality, we test ingredients, we let you know what’s the best ... we test products."

When it comes to companies who want to get their ingredients or products on the show, Simone said they don't accept any sponsorship or free items for review.

"We give you completely unbiased information," she said. "We will tell you if the $5 pan is better than the $500 pan. We don't lose or gain anything by it."

Simone and the two co-hosts of "America's Test Kitchen," Julia Collin Davison and Bridget Lancaster, are in Metro Detroit next week for two sold-out events at the Henry Ford West Bloomfield Hospital. There they'll make food and interact with the audience.

For those who weren't lucky enough to snag tickets, the whole gang can still be seen weekdays at 8 p.m. when the show airs on the Create channel on Detroit Public Television, channel 56.3.

Simone, who says she grew up on Detroit's Greek cuisine, joined ATK in 2016, and shortly after faced her first major challenge, although it had nothing to do with hard-to-find ingredients or tricky techniques. Simone was diagnosed with ovarian cancer.

"I did chemo and work at the same time," she said. "When you go through chemo you hear this phrase ‘chemo brain’ ... it’s real. The same with pregnancy brain, basically, you can’t remember (anything)."

Simone, who is now cancer free — "knock on all the wood," she says — is hoping to go into business in Detroit this year. She and her father and brother-in-law are looking for properties to open a bed and breakfast in the city.

Simone left Detroit about a decade ago, but comes back frequently enough to visit family and is familiar with the current dining landscape. She cites West Village butcher shop and chef-driven restaurant Marrow as one of her favorites, along with Sala Thai, Caribbean Citchen and E & S Carry-Out on W. McNichols near Schaefer.

"I rock hard with Sister Pie, and Lou's Deli," she said, adding that she's super into the Asian corned beef egg rolls that are all around the city. "I ate one almost every day for two weeks over Christmas — so good."