Why the stress-reducing 'Animal Crossing: New Horizons' is the game for this time of coronavirus

During these stressed-out times, when many are working from home or in isolation because of the fear of spreading the novel coronavirus, "Animal Crossing," for those lucky enough to have access to a Nintendo Switch, is something of a healing tonic

Why the stress-reducing 'Animal Crossing: New Horizons' is the game for this time of coronavirus

As the Friday release date of Nintendo's "Animal Crossing: New Horizons" approaches, there have been calls on social media for the Japanese video game giant to unleash the latest edition of the game series early -- to pull a similar advance-release move as Disney did by placing "Frozen 2" on its streaming service ahead of schedule.

The argument: During these stressed-out times, when many are working from home or in isolation because of the fear of spreading the novel coronavirus, "Animal Crossing," for those lucky enough to have access to a Nintendo Switch, is something of a healing tonic. 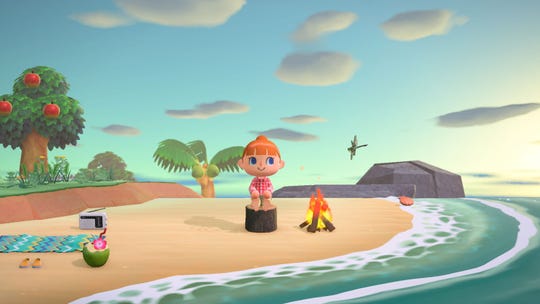 In "Animal Crossing: New Horizons" the outside world is full of wonder. (Photo: Nintendo, TNS)

"Animal Crossing: New Horizons" is not a topical game, per se. Yes, one could go deep on reading into the game's reliance on having creatures endlessly work off an ever-increasing debt, but few real-world characters are as forgiving and understanding as Tom Nook, the entrepreneurial sweater-wearing raccoon who, despite appearing overly friendly, has a not insignificant role in how our digital avatars live and work.

And yes, in "Animal Crossing: New Horizons" the setting has been transplanted from towns to tropical islands, which we harvest for resources and re-construct until they someday may feel like beach-side resorts rather than peaceful getaways. But art, especially art of the interactive kind, is shaped partly by its creators, partly by its users and heavily by the environment and culture in which it is released.

So it's not the themes of colonialism that stand out, even though it is slightly odd to take a flight to a nearly deserted island and rob it of its trees for the purposes of our own island's beautification. With "Animal Crossing: New Horizons," we have a rare moment where a commercial product and its artistic aims have managed to, purely by happenstance, of course, do a tremendous job of reading the room, as they say.

Think of "Animal Crossing: New Horizons" as a sort of virtual theme park, the ideal digital getaway for an era when merely stepping outside can be cause for severe anxiety. In "New Horizons" we can disappear into a welcome, broadly drawn world full of critters and furniture and coconut trees, all of which look like plastic toys that belong in a board game box. It's a digital tool set at its most chill, where action comes from fishing or chopping down trees or catching bugs. You really don't have to do anything if you don't want to. Best of all: You'll be able to play with friends.

The fifth game in the core "Animal Crossing" series, "New Horizons" has some enhanced flourishes _ an emphasis on crafting, a deep smartphone, a redeemable mileage program _ but all the constants are present. This is a friendly capitalistic world where securing a new cuckoo clock can be cause for celebration and where if you fall behind on your rent, no worries; you can sell some carp and pay off the bill when you want.

While I never really fell for "The Sims," I can easily get lost in an "Animal Crossing" game. It's sillier, more dream-like and I feel like the rules exist as I create them (but don't tell Tom Nook I think that).

Besides, I like the idea of having nonsensical conversations with other creatures. When a rhino suggests that I should work out, I try to imagine what pressures brought him to this island paradise. Likewise when I encounter a cat who wants to be a pop star: Wouldn't she be better in a more urban setting, or does the lack of pressure on this smaller-scale setting better suit her nerves?

None of this is spelled out in "Animal Crossing." The game is real life at its most make believe, and when I can't sneeze without having a panic attack over whether I need to call my doctor, "Animal Crossing" is just the tonal shift I need.

Indeed, to truly understand, perhaps, why I believe this game is so dialed into our collective mood, I feel I first must make a confession: I haven't accomplished much with it. If one grades video games by how much has been completed, even a game without a proper end state, then it's true that I'm not very "far" into "Animal Crossing."

But this is purely by a very specific choice, and not at all representative of the time I have spent with the game. Nintendo provided media with a release code a couple weeks before the game's Friday launch date, and in turn I have spent a few hours each day on my island paradise (I named it Kungaloosh, a nod to a cocktail once served in the now-closed Adventurers Club at Walt Disney World's Pleasure Island, even though I was too young to taste it when the adults around me ordered it).

I have spent a tremendous amount of time doing ... nothing. I have no desire to mess with the internal clock of the Nintendo Switch to skip ahead and more quickly advance my island. Sometimes I have even held back in completing some assigned tasks. For each day you boot up "New Horizons" you are met with a news report from Tom Nook. The news reports on the days you have done nothing are the best.

Right now, I find few things more reassuring than a a plump raccoon in a brown sweater saying the following: "Well, this is amusing ... . There isn't any news to report!"

From there, it's off to roam my island, currently home to a body-building rhino (he's kind of a tool) and a dog with a penchant for Goth wear (she's a little on edge). Some cats who promised to move in are on the way, and the local owl says a museum should be completed by the time anyone has read this.

Along the way I helped a ghost recover its spirits, a seagull find the pieces of a broken honing device (a smartphone) and have been hoarding materials to build a brand new store and enter into a new era of commerce.

I currently owe about 60,000 "bells," which is the "New Horizons" currency, and I'll need to pay that off if I want a nicer house, which will require further borrowing. But like America I imagine such a debt is more common than it should be, so it's really the least of my worries.

After all, in "New Horizons" if I get sick I can just craft my own medicine. And all it really takes to build some nifty furniture is some wood and some rocks, even ifhunting down the materials can be a slog.

On Sunday, the day I'm writing this, I've been clearing some land of trees and weeds to find a place for the cats who are relocating to my island to live. Earlier, I spent a couple thousand bells on a pot that floats (it floats!) and an aloha shirt, so I'm feeling pretty good about my accomplishments for the day.

Tom Nook, of course, has things he wants me to do. I need to find some more iron so we can build his shop, and I need to complete additional tasks _ fishing, building furniture, clearing weeds, tending to my garden, leaving notes for my island's fictional inhabitants _ so I can accrue more "Nook Miles," a sort of company scrip that allows me to pay for travel or other goods.

But I'll get around to it. I'm mostly looking forward to having some cats to talk to, and maybe running into more weirdos like that ghost.

For the rest of the day, I'm thinking of hanging in my home and re-arranging things _ I don't really like where I put my spinning wheel. And maybe I'll do a little fishing. If I could earn more Nook Miles I could buy another plane ticket to a random island, and I'd like some more coconut trees.

Once the game is released, I look forward to inviting some of my friends, via the in-game smartphone, to my little Kungaloosh. We can run around and collect butterflies on a Friday night.

For now, I just know I don't want to turn off "New Horizons." If I flip on NPR or even browse to this newspaper's web page, I won't be met by someone cheerfully saying, "There isn't any news to report!"

So if social distance we must, then I found my happy place.