Review: Netflix's 'Tiger King' is the great binge of the 2020 quarantine

Review: Netflix's 'Tiger King' is the great binge of the 2020 quarantine

The 7-part series is built for binge-watching, and we all need something to binge-watch right now. It presents a world with new layers that keep revealing themselves like Russian nesting dolls, except the dolls all have midnight blue eyeliner and dress like Siegfried & Roy by way of Brooks & Dunn. 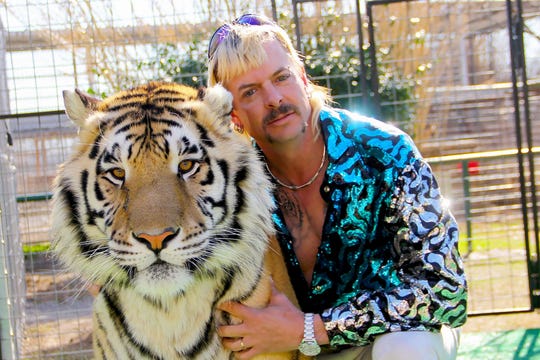 Welcome to the world of Joe Exotic, the gun-toting owner of a roadside Oklahoma zoo who fancies himself the "Tiger King." To call him eccentric is a disservice to the term; he's a complete maniac, a tiger breeder who owns hundreds of big cats and has side hustles as a country music singer and host of a daily internet talk show. And oh yeah, he's got two husbands.

He's also a magnetic, strangely charismatic individual, and he's our way into the mad, mad world of big cat owners, which is rife with outsize personalities that make self-indulgent rock stars look like demure librarians.

It's not long before we're introduced to Doc Antle, a Myrtle Beach zoo owner who is described by himself and others as a "God" (like Mr. Exotic, he is also juggling multiple marriages) and Carole Baskin, who fancies herself "the Mother Teresa of Big Cats," who has a long-running, forever-escalating feud with Joe Exotic that kicks the story into gear.

And what a story it is. Just when you think it can't get any wilder, directors Eric Goode and Rebecca Chaiklin hit you with another big twist that leaves you reeling, framing the 40-ish minute episodes with juicy cliffhangers that make it difficult to turn away. And they know how to let their subjects reveal themselves, leaving in small personality tells that would have likely been chopped in a shorter documentary.

Some threads dangle, including one rather large plot involving Baskin's past, but it helps color the the strange realm of the "Tiger King" universe.

"Lot of drama in the zoo world," one of the side characters says deep into "Tiger King," a fantastic understatement but a perfect summation of the web of lies, double-crosses and backstabbing at the story's center. It's a tiger of a tale; exotic is an understatement.