Stuck streaming: The 20 best sketches on Tim Robinson's 'I Think You Should Leave'

Stuck streaming: The 20 best sketches on Tim Robinson's 'I Think You Should Leave'

Tim Robinson had just started shooting the second season of his Netflix sketch comedy show, "I Think You Should Leave," when filming was suddenly halted due to the coronavirus outbreak.

"We had almost got through first week, and then we shut down production," says Robinson, on the phone earlier this week from his home in Los Angeles, where he's on week four of lockdown with his wife and two children. Things were going well, he says, prior to the disruption. "We were really excited to be starting shooting," he says. 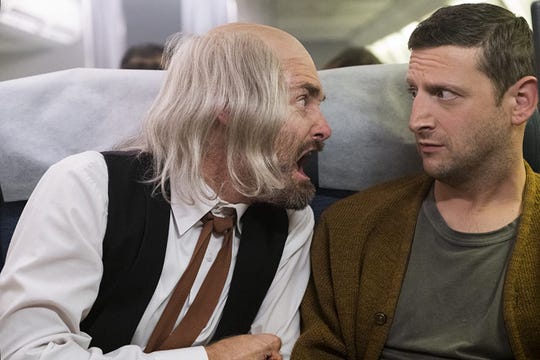 Will Forte and Tim Robinson in the airline passenger sketch in "I Think You Should Leave." (Photo: Netflix)

Now, like everything else in Hollywood and in the world, the arrival of "I Think You Should Leave's" second season is up in the air, as it will likely be months before production is back up and running.

In the meantime, there's "I Think You Should Leave's" uproarious first season, which is streaming on Netflix. The sketch comedy series debuted a year ago this month, and quickly found an audience who took to the show's offbeat comic rhythms and bizarre sensibilities; it's like every sketch was engineered to be the too-weird-for-prime-time 12:50 a.m. "SNL" sketch, and then taken to an even more out-there extreme.

Robinson, who was raised in Clarkston and started in comedy at Second City Detroit and Hamtramck's Planet Ant Theater, spent a year as a cast member on "SNL" and another year as a staff writer at the mecca for late night sketch comedy. (Last month he made a donation to Planet Ant, in light of the theater's COVID-19 shutdown.)

From there he went to write, produce and star in "Detroiters," which lasted two seasons on Comedy Central, before launching "I Think You Should Leave" with the Lonely Island's Akiva Schaffer and a writing team that includes "MacGruber" writer John Solomon and "Detroiters'" Zach Kanin.

The 6-episode series is a rapid-fire binge watch; installments are roughly 15 minutes each, so the whole thing can be viewed in about 90 minutes. Every episode has between four and six sketches that are just a few minutes in length.

The 20 Best "I Think You Should Leave" Sketches

1. The Gift Receipt (Episode 1) — The sketch that best represents "I Think You Should Leave's" M.O. is this exercise in absurdity, which keeps doubling down and getting stranger as it goes on. It begins with an awkward party guest making sure his friend appreciates the birthday gift he's given him and quickly morphs into something else entirely, and demonstrates the way you're never quite sure the show is heading. "That was the one where we started to figure things out," says Robinson. "We did that one early on, and when we did it, I knew it had the feel and the tone we wanted to set for the show."

Tim Robinson, Brianna Baker and Steven Yeun in the Gift Receipt sketch in "I Think You Should Leave." (Photo: Netflix)

2. Flight Neighbor (Episode 2) — Will Forte, channeling Julian Beck's scary old man character from the "Poltergeist" movies, plays the airline traveler from hell whose devious plan to annoy a fellow passenger (Robinson) unravels before his eyes. "It was hard to keep a straight face in that one," says Robinson, of acting opposite Forte. "He was really close to me."

3. Job Interview (Episode 1) — It's simple: after a job interview goes well, a man tries to pull open a door that should have been pushed, and then tries to cover up his mistake. But it speaks to how far people will go to try to not look stupid in the eyes of others, even if it makes them look even more stupid in the process, a core element of "I Think You Should Leave's" value system. 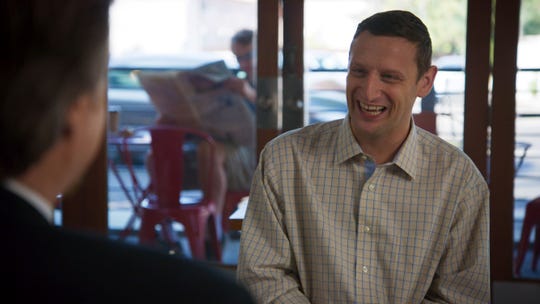 Tim Robinson in the job interview sketch from "I Think You Should Leave." (Photo: Netflix)

4. Bozo Dubbed Over (Episode 6) — When he doesn't have a favorite viral video to share with co-workers during downtime at the office, a socially uncomfortable man (Robinson, of course) goes to great lengths to fit in with his peers. That desire to belong and just be normal is at the heart of many of the show's sketches. 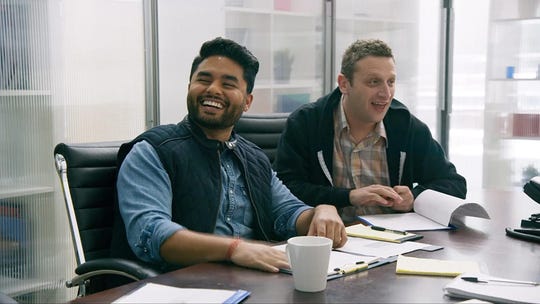 Tim Robinson, right, in "I Think You Should Leave's" Bozo Dubbed Over sketch. (Photo: Netflix)

5. Hot Dog Car Crash (Episode 5) — When a hot dog-shaped car crashes into a department store, the obvious culprit does his best to cover his tracks. Robinson says the sketch was inspired by a real-life story he saw about a hot dog car crashing into a house, and was a leftover idea from "SNL" he never got on the air. 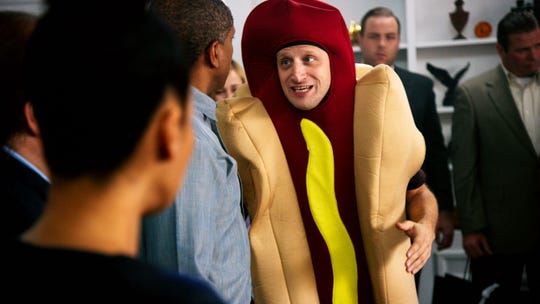 Tim Robinson in the Hot Dog Car sketch in "I Think You Should Leave." (Photo: Netflix) 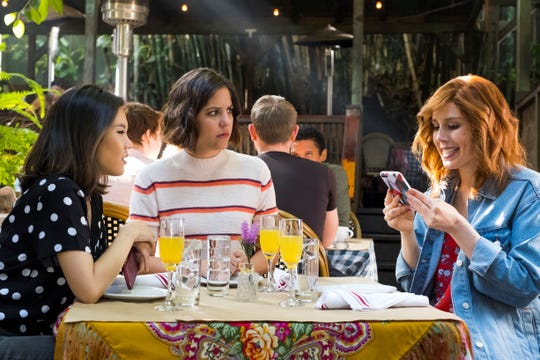 8. TC Tuggers (Episode 2) — A soapy TV teen drama is hijacked by an in-show sponsorship for T-shirts with attached belly looseners, and then becomes a parody of early '90s Levi's commercials. TC Tuggers: they're not a joke, you don't make jokes about them. 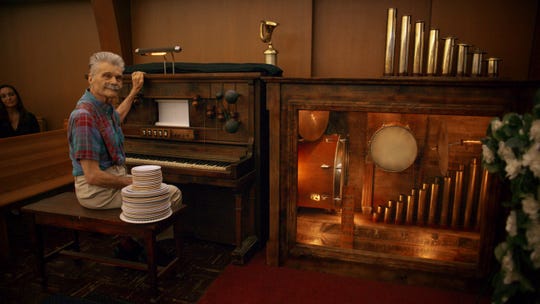 Fred Willard in "I Think You Should Leave's" replacement organist sketch. (Photo: Netflix)

10. Late to the Party (Episode 5) — A white lie about being late to a party gets out of hand and then keeps getting worse. "It's that need to belong and to want to feel OK, and sometimes in wanting to be accepted, people end up digging themselves into a hole," says Robinson.

11. Has This Ever Happened to You? (Episode 1) — A parody of lawyer commercials — much like those local Detroit-area TV spots that inspired so much of "Detroiters" — involving an attorney who was visited by a pair of peculiar guests.

Tim Robinson in "I Think You Should Leave's" "Has this ever happened to you?" sketch. (Photo: Netflix)

12. The Night the Skeletons Came to Life (Episode 5) — In this riff on star-making moments in music industry biopics, a Johnny Cash-style singer's breakthrough is frequently interrupted by his bandmate's improvised tune about an army of resurrected skeleton warriors.

13. Focus Group (Episode 3) — One of Robinson's proudest moments from the show is this sketch, which made a meme out of character actor Ruben Rabasa, who plays a man in a focus group with really bad ideas for what should go into a vehicle. "I really like how much people enjoy Ruben," Robinson says. "I like to see his face going around the internet."

14. Whoopee Cushion (Episode 2) — A co-worker prank — the forced awkwardness of office culture is a recurring "I Think You Should Leave" theme — goes bad in this sketch that illustrates how embarrassment can quickly morph into rage.

15. Charades (Episode 3) — Tim Heidecker, who knows a thing or two about oddball sketch comedy, shows up as a jazz enthusiast whose references are a bit too obscure (shout out to "The Colgate Comedy Hour") for his fellow party guests.

16. Motorcycles (Episode 2) — A quickie about a group of motorcycle enthusiasts from outer space was inspired by writer Zach Kanin. "We were walking down the street and we saw this guy, who looked like a motorcycle guy, yelling it a bus. Zach said, 'That guy hates everything that's not motorcycles,'" Robinson says. Say no more. 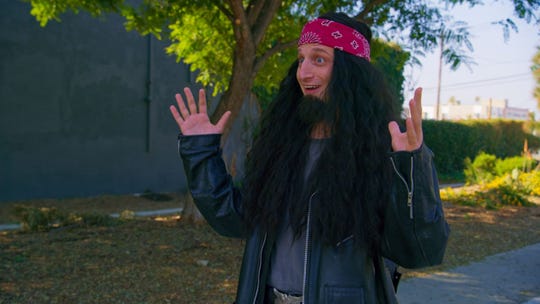 Tim Robinson in the Motorcycles sketch in "I Think You Should Leave." (Photo: Netflix)

17. Dan Vega’s Mega Money Quiz (Episode 6) — Andy Samberg shows up in this sketch about a new game show that's not quite sure what it is yet. 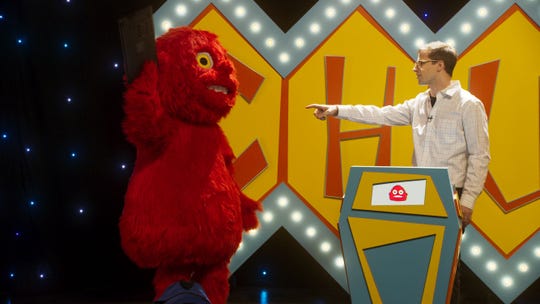 18. Caleb Wendt (Episode 5) — Robinson plays a dinner guest who's so starstruck by the presence of an actor he admires that he refuses to admit he's choking out of fear of being embarrassed in front of his hero. Again, the sketch speaks to the desire to be cool and accepted by one's peers and fly under the radar as much as possible. 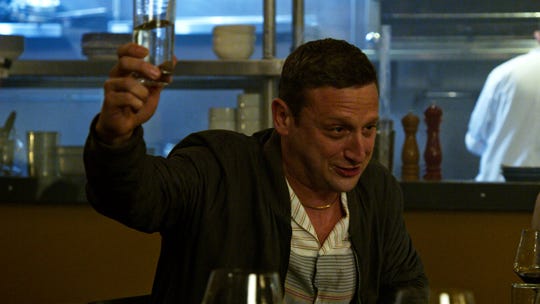 Tim Robinson in "I Think You Should Leave's" Caleb Wendt sketch. (Photo: Netflix)

19. Wilson’s Natural Hair Loss System (Episode 2) — Bald or balding? This phony infomercial offers an insane solution, a series of hundreds of wigs that allows you to lose your hair slowly rather than face the embarrassment of admitting the truth to your peers.

20. Fully Loaded Nachos (Episode 4) — A man goes out of his way to stop his date from eating all the good nachos in this sketch that's oddly relatable yet would never happen in real life, which is a good summary of the way "I Think You Should Leave" highlights feelings of anxiety we all have and lays them out for wild laughs.