Graham: Fans hold breath for refunds as concert industry is put on hold

As COVID-19 has shut down the concert industry, fans are having a tough time getting money back for shows that aren't happening

Graham: Fans hold breath for refunds as concert industry is put on hold

As COVID-19 has shut down the concert industry, fans are having a tough time getting money back for shows that aren't happening

For weeks, concert fans have endured announcement after announcement of their favorite acts canceling or delaying shows in the wake of the coronavirus pandemic. Post Malone? More like Postpone Malone.

There's been hope that soon things will work themselves out and we'll get back to normal. There were a couple of reports this week, however, that indicated it will be a long time before concert fans hear — or are a part of — the roar of a crowd again.

Nope, not an alien ship landing. The spotlight was for Harry Styles, performing in concert with Kacey Musgraves at Little Caesars Arena in Detroit on June 26, 2018. (Photo: Daniel Mears, The Detroit News)

Early in the week there was a New York Times report in which a healthcare expert was quoted as saying concerts would be back — deep breath — in fall 2021, "at the earliest."

And on Thursday, Senate Republicans released a plan to reopen Michigan's economy in phases. Tucked way in the back of the sobering report was a plan for the return of concerts, festivals and sporting events, which stated those events would restart after active spread of the virus had stopped for 30 days, or a vaccine was available.

Since we're a long way from either of those things happening, refunds for those tickets fans are holding on to should be flowing back into their bank accounts, right?

Ah, if only it were so easy.

Everyone's favorite ticketing company, Ticketmaster, has, in its infinite wisdom, gone and made it harder, not easier, for fans to get their money back for concerts and events they bought tickets to that are clearly not happening anytime soon.

Around a month ago when the tsunami of cancellations and postponements began, Ticketmaster quietly changed the wording of its refund policy on its website, like a thief in the night that's also a giant corporation.

Where the old policy stated refunds were available "if your event is postponed, rescheduled or canceled," it now only lists cancellation as a means for getting back your money.

And because it's become a game of language — "canceled" vs. "postponed" vs. "rescheduled," etc. — fans, who have hundreds or even thousands of dollars tied up in tickets for shows in limbo, are having a tough time getting reimbursed for those tix.

It should come as no surprise that Ticketmaster is being a heel in all this. This is the same company that tacks on service fees just for the convenience of receiving the tickets that you purchased, and which several years ago settled a massive class action lawsuit by offering fans vouchers for shows and then made it near-impossible to use said vouchers. They're the Spirit Airlines of ticketing companies.

Except Ticketmaster is the biggest player in the ticketing game, and odds are if you have tickets for an upcoming concert or sporting event, they're issued through the ticketing giant.

Ticket reseller Stubhub finds itself in a similar situation, and has stopped offering cash refunds for tickets, instead offering vouchers for canceled shows and events. Vouchers are cool in normal times, but these are not normal times.

Sporting events are in the same boat as concerts, as both have endured mass cancellations and are on a similar timeline for returns. (Sports will have a smoother time returning and adjusting to a new normal; it's easier to hold a baseball game without fans than it is an Elton John concert.)

This is how the ticketing system works: When you purchase a concert ticket, you buy it for a specific date and time that all parties — artist, fan and the ticketing agency — have agreed to in advance. It's a contract all three parties enter into together. It's not as if the Weeknd says, "I'll be in Detroit when I feel like it, buy a ticket and I'll see you when I see you."

Yet Ticketmaster seems to assume that if you bought tickets to a concert, you committed to that event regardless of when it may end up taking place.

Bought tickets for an out-of-town concert on a Saturday night? Well you're on the hook for that show six months later when it's rescheduled on a weeknight, because you bought the tickets, no one made you buy them, this is on you. Ticketmaster is the bully that grabs your hands and hits you and then blames you for punching yourself in the face. 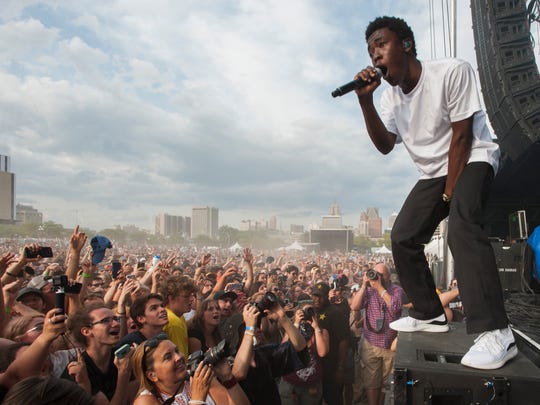 Brockhampton's Merlyn Wood raps to the crowd at the edge of the River Stage on day two of the Mo Pop Festival in Detroit, Sunday, July 29, 2018. (Photo: John T. Greilick, Detroit News)

Meanwhile, a lot of those fans who bought tickets to shows are now facing unemployment and lost wages, and where floor tickets to see a reunited Rage Against the Machine this summer was their top priority a few months ago, their reality has since changed.

It should be simple for those fans to get their money back, if for no other reason, out of goodwill for the customer base: When concerts do indeed come back, these are the very people you need to buy tickets to them.

After an outcry from fans, there are indications concessions will be made. Concert promoter AEG has announced it will begin offering refunds for tickets to concerts that have been rescheduled, as long as new dates have been announced.

And Live Nation, which owns Ticketmaster, said in a statement to the New York Times it will offer "an opportunity for refunds on all of its rescheduled shows as new dates are set."

Both come with caveats that are dependent on the language of how shows are reclassified. Again, more games.

Ticketmaster: stop playing around and give fans their money back. No one expected this, but it's wrong to punish fans for purchasing tickets to events. This is a time to do the right thing and make things better for people, not worse.

We want concerts back just as much as you do, but in the meantime, don't make us pay for them.