A weekly teleconference started by CultureSource is helping heads of arts nonprofits navigate the covid crisis.

Running a nonprofit arts organization when times are flush is challenge enough. Staying afloat in a plummeting economy, as almost any CEO could tell you these days, is something else again.

With operations closed down, funding in doubt, programming on hold and employees mostly furloughed or laid off, the past couple months have been a slow-motion nightmare for most executive directors.

"Omari usually asks several people to describe how their organizations are doing," said Lynne Avadenka, executive director of Detroit's Signal-Return. "It's a bit of a therapy session for leaders of arts organizations."

Said Rush, "I'm just trying to bring people together to huddle and share stories, and make them feel they’re not alone right now."

At Detroit's Scarab Club, Executive Director MaryAnn Wilkinson called the sessions "a comforting lifeline that helped me get past the rupture of suddenly being out of touch with everybody."

Ryan Myers-Johnson, executive director of Sidewalk Detroit -- which mounts a Sidewalk Festival every August in Old Redford -- described the conversations as cathartic.

"Just putting people together and giving them the opportunity to talk about what they're going through," she said, "is useful and helps drive solutions." 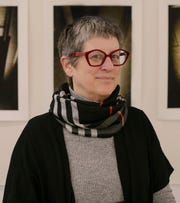 Lynne Avadenka is one of the arts-and-culture executive directors who's found the weekly conference calls organized by CultureSource highly useful. (Photo: Brittany Geeson)

One of the biggest draws recently was Sen. Debbie Stabenow, who fielded questions about federal help to struggling businesses.

Other topics addressed include how to access the federal government's Paycheck Protection Program, monetize online programming, and deal with funders who might not think the arts are particularly essential right now.

"The conversations are less about clear solutions," Rush said," and more about people understanding how to navigate foggy channels."

The teleconferences take place Thursdays at 3:30 p.m., and are limited to one hour. (A Wednesday session for senior staff beneath the CEO-level has also been added.)

Participating organizations must be CultureSource members, which number about 160. Discussions are handled on Zoom, but are accessible by phone as well. 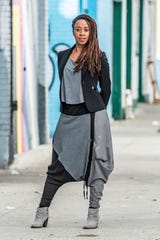 Ryan Myers-Johnson, founder of Sidewalk Detroit, says the weekly teleconference calls have been cathartic for many stressed executive directors in the arts sector. (Photo: Kate Gowman)

Contrary to most Zoom chats, however, there's no video element - just audio, in part, Rush said, so people can participate while driving or multi-tasking. Many find this refreshing.

"Just being able to say what you need to without worrying about your cat or husband in the background," said Myers-Johnson, "has been great."