Some Detroit area artists are taking e a step back and making changes in how they approach, distribute and market their work

It’s dark out and Matthew Naimi, the owner of Detroit Recycles Here, stands shirtless in Carhartt overalls, flanked by a drummer behind a simple jazz set. Naimi stands next to what appears to be a huge torch emblazoned with the words “Death of the American Dream.” Its flame sputters, perhaps, a dozen feet above him. Four bicycle riders, on bikes in ascending order of height, from rather conventional to one that puts the rider at head level with the torch, orbit Naimi, the drummer and the flickering votive in what looks like some sort of ritual observance. 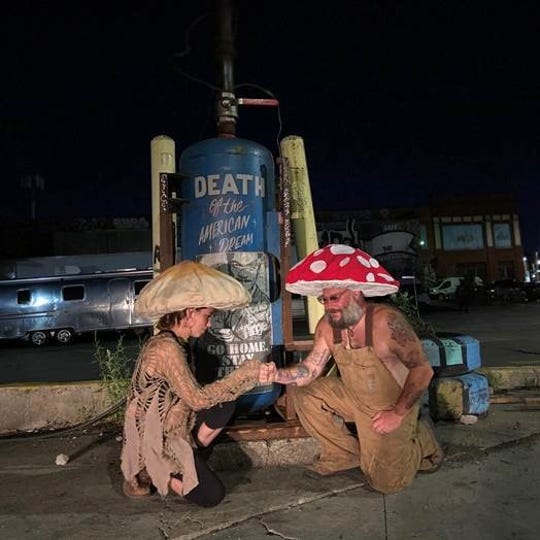 “Midnight in America, the Death of the American Dream, Day 95, July 4th,” Naimi says, addressing his Instagram followers. Naimi muses about freedom and exhorts his audience to “do something today to make this day a better day. Be loud as ****.” He then turns his back on the camera and heaves open the valve at the bottom of the torch. A fireball explodes from the Death of the American Dream and dissipates into the dark skies of Detroit above; the drummer takes a solo.

Across the country and the world, the COVID-19 pandemic has upset the social and economic order in ways that have forced those from all walks of life to re-evaluate how they live, make money and move about the world. That fact is doubly true for artists of all stripes and has forced some Detroit area artists to take a step back and make changes in how they approach, distribute and market their work. This has meant that many have had to thoughtfully migrate their work to online or hybrid models of display or presentation, while others have had to put work (and their paychecks) on the back burner.

Showing work online has been particularly challenging for Naimi, saying, “All of the projects that I involve myself in are about bringing people together, not about reaching out through digital means. Sure, you can keep in touch through digital platforms, but face-to-face contact is how you actually build a connection and build community.”

The Detroit-based musician and producer Asante is unsure about even attempting to bring his work to digital platforms. Asante, an American of Ghanan parentage, works largely in the Afro-Beat, R&B and jazz genres, and is also the creator and emcee of a Caribbean music and food celebration called “Jerk X Jallof.” He says, “I was supposed to perform at Movement, I was also supposed to perform at the annual Allied Media Conference as their (Saturday)  night event and I’m not necessarily interested in a virtual performance.” Instead he is concentrating on pushing his last album, "Sleek Boy," and getting work done in the studio.

Obviously, this is a setback for Asante and others, “This summer was definitely shaping up to be one of those times when I could grow my audience outside of Detroit through my touring, shows and other businesses and now that's pretty much gone,” he shrugged. “I have to go back to the drawing board. Whether it's just to film some music videos and some content then just sit on it until 2021. I don’t know man, there’s no telling how the next six months of this year are going to go.”

While Asante is confident he can work it out, he recognizes these times as arduous. In the meantime, Sterling Toles, a “visual and sonic creative,” emphasizes that for him our collective forced isolation has fostered an unprecedented opportunity for personal and creative growth. Toles has treated this time as “more of a sabbatical, it would be great if it weren’t under these circumstances, but to be real with you I been looking for a moment like this my entire life.”

Toles, as he prepares to release his upcoming album, a collaboration with Detroit rapper Boldy James titled "Manger on McNichols" and continues to plug away at his numerous creative endeavors, believes that the pandemic has something to teach us as well: “It’s an interesting thing, because on one hand we’re in this situation where we’re being asked to socially distance and simultaneously experiencing the wretched fruit of how we’ve emotionally distanced ourselves based on how we’ve identified each other.”

For sure, for many of these artists, the pandemic has helped to shine a light on other societal ills having nothing to do with a virus. Donovan Hohn of Ann Arbor is an essayist and professor of creative writing at Wayne State University. The writer was initially hesitant to be interviewed for this article out of a concern that in explaining the pandemic related obstacles in his creative career he would be minimizing the message and struggles of the marginalized and those marching in the streets, calling for justice.

Hohn has just released a book of essays titled "The Inner Coast" (W.W. Norton) and, as early March approached, was preparing to embark on a fairly extensive book tour. As the pandemic raged and states began issuing stay at home orders, Hohn and his publisher were forced to scrap tour plans and tack. “I had this nice long solo road trip that I was going on and now suddenly we were scrambling, we canceled most of the events,” Hohn says. Instead these bookstore events were replaced with a series of online interviews and readings. “What I love about being in these bookstores is that they tend to be part of a neighborhood. When you go to an event at those places, it's about being present in those places, but when suddenly you’re in the ‘Zoom scape’ and no one is in the same room, well… Though, there is an advantage to this, in some respects because anyone anywhere in the world can be attending, but there is a loss that comes with that. You no longer feel like you’re joining your community anchored there in the bookstore.” 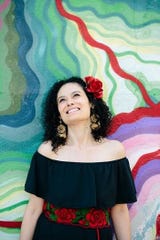 Karilú Alarcón Forshee, an interdisciplinary artist and a Knights Arts Challenge winner based out of southwest Detroit, blends experimental theater with music and says, “My work is inspired by the entire Latin American diaspora. I try to create environments that inspire and nurture human connection through my identity as an immigrant and my identity as a Mexican American.”

Foshee echoes Hohn’s keenly felt sense of loss of intimacy with her audience. She explained that when the scope of the pandemic became clear, her work initially suffered. “I did feel blocked,” she says, “how can I put myself in this position to write when all of these immediate needs are happening? All of this awfulness is going on. There was a huge pause on everything I was doing.”

As a teaching artist with Living Arts, a Detroit based teaching residency program that focuses on youth arts education, this aspect of her career has been another casualty of the pandemic. She can no longer be face to face with her students or colleagues. Her Zoom meetings with her fellow actors at the theater company, A Host of People, have elicited some frustrations in the performer. Yet she still manages to find some joy and success on the digital platforms.

“I recently led a workshop for caregivers. It was through Zoom to promote self-care in children. What I wanted to accomplish was establish human connection and critical thinking sharing their ideas: the whole process. And it happened! The screen maybe made it more difficult, but it happened and I had a lot of joy after. It was a profound experience! Through Zoom!” 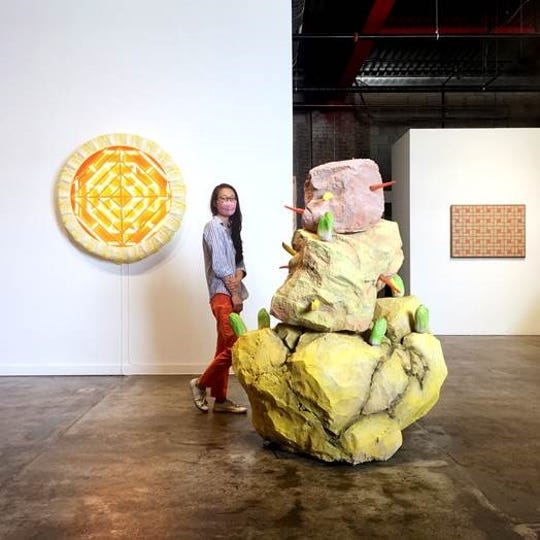 The Wasserman Project, an art gallery in Detroit’s Eastern Market, is entered into through a bright red door on the side of the soft red brick building. The ceilings soar with exposed red I-beams and polished concrete floors. Wasserman director and curator Alison Wong says of the gallery that the space is perfect for “unconventional work, for performance and visual art or collaborative work that might not be possible outside of this space.” This is certainly true of the current exhibition, a joint showing of the the artists Adrian Wong, a Chicagoan, with his show "Tiles, Grates, Poles, Rocks, Plants, and Veggies" and Detroit’s Dorota and Steve Coy of the conceptual art duo the Hygienic Dress League. The Coy’s show, "The Five Realms," is an expansion of their previous mirror-ball speculative mythology, and includes a pantheon of modern Gods, animals melting back into the earth and blinged out gas masks. The gallery will be showing the work through Aug. 15.

Wong, also clad in a mask (though bereft of any noticeable bling), has opened the gallery for individual guided tours, by appointment only. The gallery has even experimented with some digital tours. Though it’s been an adjustment, the upshot she says, “Is that anyone who makes an appointment gets the gallery to themselves and a full tour.” And it has been popular. Appointments have been booked every day, with dozens of people having shown up since June 18 and several pieces having sold. This has all been conducted in accordance with the highest standards of safety, Wong emphasizes, “Masks are required and we’re being as safe as possible while maintaining stricter guidelines than the state requires.” 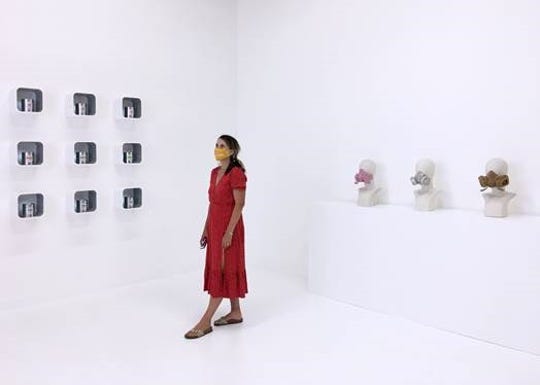 Artist Dorota Coy stands among her and Steve Coy's work from the exhibition "The Five Realms" currently in display at the Wasserman Project Gallery. (Photo: Alison Wong)

As the tour wound down, Dorota Coy, masked, stood and considered some of Steve’s and her own work, taking a careful look at several busts sporting bejeweled gas masks and taking a few photos with her phone. “That is so good,” Steve Coy laughed as Wong snapped a pic of Dorota.