Review: 'Umbrella Academy' goes back to save the future

Review: 'Umbrella Academy' goes back to save the future

When it rains on “The Umbrella Academy,” it pours.

At the end of the show’s first season its offbeat family of superheroes had just triggered the end of the world in 2019, so they traveled back in time to fix things. At the beginning of the second season they find themselves scattered around Dallas in the early '60s. 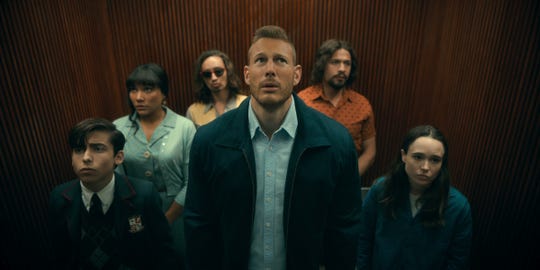 Where, it turns out, they will spark yet another apocalypse.

Oh, well, at least ending the world will be more fun this time around. The first season of UA was built around the supposed secret that the one member of the brood who didn’t have superpowers — Vanya, played by Ellen Page — was actually the most powerful. Yeah, sure. Page, a onetime Oscar nominee, was the only recognizable name in the cast; obviously she was there for a reason.

This time around UA has no (obvious) big secrets and each character gets a solo story line since they land in different spots around Dallas at different times.

Knife-wielding Diego (David Castaneda) wants to stop JFK’s assassination, so he ends up in a mental hospital. Ape-like Luther (Tom Hopper) becomes a bare-knuckle fighter. Klaus (Robert Sheehan), who can talk to dead people (a fairly useless power), becomes a guru. And Allison (Emmy Raver-Lampman), who has the power of suggestion, actually marries and gets involved in the civil rights movement.

It's up to the time-traveling, space-shifting Number Five (Aidan Gallagher, the show’s true star), to put the band back together again. Five, by the way, is a full-grown man trapped in the body and clothes of a schoolboy.

The violence factor is as high as the candy-colored production values, Kate Walsh returns as the dripping-evil top villain, and Ritu Arya adds snap as a sharp-talking wild card. Race and LGBTQ issues provide ballast, but for the most part “The Umbrella Academy” is just inspired bloody silliness the second time around.

As it turns out, inspired bloody silliness hits the spot in 2020.