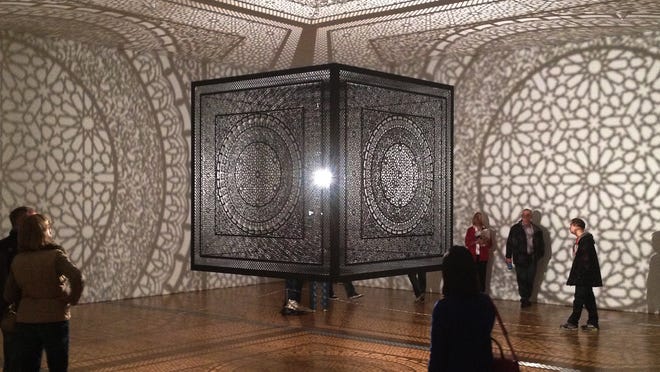 For the first time ever, one artist won both the public vote and juried Grand Prizes at ArtPrize — though Indianapolis artist Anila Quayyum Agha split the latter with Sonya Clark of Richmond, Virginia.

Not surprisingly, when reached Friday evening, Agha described herself as euphoric. "I'm feeling really good and a little shaken, of course," she said from Grand Rapids, "but very happy."

Agha, who teaches design at Indiana University's Indianapolis campus, said she'll use the money to fund more art projects and pay off her studio space.

Agha won for an installation titled "Intersections," which she described as "a giant sculpture in the shape of a cube, with a single light source that casts shadows all around the room, creating almost a secret space. It really resonated with the public. I'm just so thrilled they liked it."

You get two chances to win with ArtPrize, the "radically open" competition. Famously, visitors get to vote on their favorite pieces — the "American Idol" model that won the competition huge attention when founder Rick DeVos first launched ArtPrize in 2009.

This year, a total of 41,109 individuals cast 398,714 votes for the 1,536 pieces of artwork scattered all across central Grand Rapids, from the Grand Rapids Art Museum to neighborhood bars and galleries.

But starting in 2010, organizers also added the juried component, with experts picking winners that get the same prizes as those picked by public vote. A total of $540,000 is given away.

Three runners-up in the public vote will take home $20,000 apiece. They are Gretchyn Lauer of Grand Rapids for "Outcry," a two-dimensional piece; Marc Sijan of Milwaukee for "'Reciprocity," a three-dimensional hyper-realistic sculpture of the artist and his father, and Robert Shangle of Sparta, Mich., for "Your Move?," a time-based creation.

Runners-up winning $20,000 each in the juried awards include Maximo Gonzalez of Mexico City for a three-dimensional work, Dance in the Annex of Grand Rapids for a time-based piece, and Julie Schenkelberg of Brooklyn, N.Y. for an installation.

Nor did the only Metro Detroiter to make the juried finalist list, University of Michigan art professor Osman Khan.

Another artist who didn't win caused a ruckus early Friday when he announced that were he to win, he'd give the money away for political reasons.

Steve Lambert of Beacon, New York, said he would donate any winnings to a gay and lesbian organization, The LGBT Fund of Grand Rapids, because he didn't want to take money from the politically conservative DeVos family.

Reached Friday, Lambert said, "I decided taking the money would be over the line. It just didn't feel right."

The Dick and Betsy DeVos Family Foundation initially contributed all the prize money for ArtPrize, started by their son, Rick. But this year, the foundation put up less than 30 percent of the total winnings.