‘39 Years’ is a retrospective of work displayed at the Susanne Hilberry Gallery in Ferndale, runs through Feb. 13. 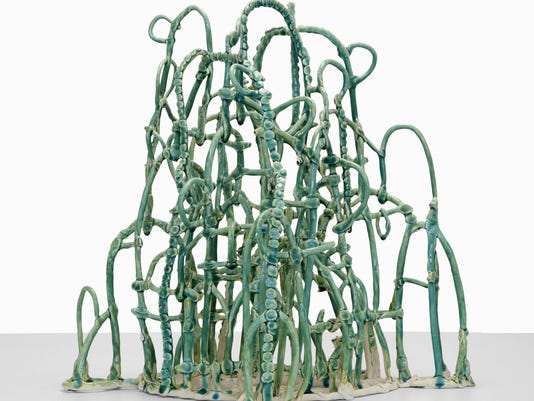 For nearly 40 years, Susanne Hilberry, who died in August at age 72, ran what many regard as Michigan’s most important contemporary art gallery.

Hilberry’s reach with her eponymous gallery in Ferndale was impressive.

So the memorial show staged in Hilberry’s honor, “Thirty Nine Years” — the gallery’s life span — is a tribute to Hilberry’s remarkable eye and a gift to local art enthusiasts, who won’t see such a collection of contemporary work all in one spot for some time.

Each of the 47 artists has been the subject of a solo show at the gallery, and has one piece in “Thirty Nine Years,” explains gallery director Hazel Blake.

There’s so much intriguing work here, it’s a little hard to know where to turn.

But start with Patrick Hill’s “Untitled (Flower).” This gorgeous construction by the Detroit native, who only recently moved back to the area, features a broad strip of shiny stainless steel folded like a piece of office paper.

Giving it visual oomph is the fact that one side of the steel is covered in textured, hand-made paper dyed a striking periwinkle blue. The contrast of surfaces is breathtaking.

Fans of early modernism might want to zero in on Anne-Lise Coste’s “Interior with Moby Dick.”

This airbrushed 2014 painting with attached French centimes reads very much like “The Window,” Matisse’s flat-perspective masterpiece at the Detroit Institute of Arts, even if subject and treatment are very different. (They both involve tables, however.)

All in all, it’s a thoroughly charming trip back to an earlier period in painting and spatial organization.

For something more current and abrasive, check out Mitchnick’s “Black Bird Walking,” a 2015 painting that confirms this artistic vet has lost none of her chops.

“Black Bird” is visually arresting, not least because it’s unclear whether the protagonist is standing astride its own shadow or tearing apart a dead bird at its feet.

Creepy? Yes, but intriguingly so — and a knockout.

Other works worth seeking out include Snider’s romantic portrait of Hilberry’s Birmingham home, “A House Moved.”

And don’t miss “Celestial Ship of the North (Emergency Ark),” Scott Hocking’s portrait of his most-recent exercise in artistic myth-making — in this case, a wooden ark mounted on telephone poles that looms above the soybean fields around Port Austin.

Finally, bookending the show are two intriguing portraits of Hilberry herself.

One just to the left as you enter is by painter and Wayne State professor emeritus Robert Wilbert, and features a young, somewhat Egyptian-looking Hilberry sporting red lipstick.

The Wilbert peers across to the far wall where another “Susanne” hangs, this one by Billy Sullivan and painted from a recent photograph just for this show.

Wilbert’s “Susanne” is astonishingly real and present — you feel like you know this striking young woman. But Sullivan gives us a charmingly angular portrait of the gallerist in recent years — an affectionate, accurate memorial of a remarkable woman.