Nancy Mitchnick, one of the brightest talents from Detroit’s Cass Corridor movement, has a luminous show at MOCAD. 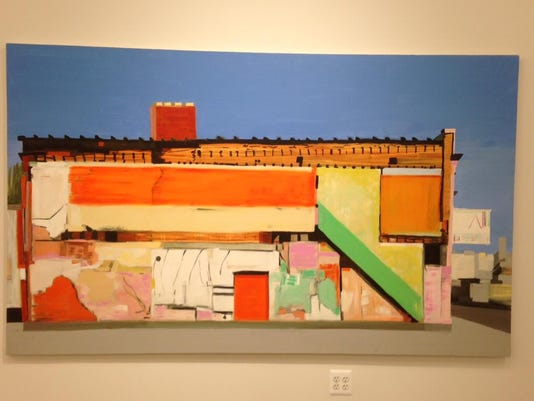 Nancy Mitchnick, one of the brightest talents to emerge from Detroit’s Cass Corridor movement in the 1970s, has a luminous show up at the Museum of Contemporary Art Detroit through July 31.

“Nancy Mitchnick: Uncalibrated” highlights the work the artist has done since she gave up teaching at Harvard and returned to Detroit in 2012.

Like many of the the city’s most-interesting painters (Clinton Snider and Nicole Macdonald come to mind), Mitchnick is drawn to Detroit’s one-of-a-kind landscape, and abandoned buildings figure in many of the works on display.

In Mitchnick’s hands, however, these portraits have a lyrical quality that belies their subjects’ dilapidation. Indeed, works like “Torn Orange” amount to dazzling exercises in color and abstraction that are hard to take your eyes off.

A cacophony of competing colors — kelly green, orange and shocking pink — gives the building in “Torn Orange” its kick. By contrast, the utter simplicity of “First House,” where a light-green roof is just about the only color in a low-key landscape, packs unexpected punch as well.

Mitchnick, always a more figurative painter than many of her male Cass Corridor colleagues, offers only a few human studies here, including a two-canvas portrait of a friend named David Butler. (The paintings are amusingly titled “First Hit” and “Finished,” just so you get the sequence.)

“David Butler First Hit” is one of the few human studies at MOCAD from Mitchnick. (Photo: Michael H. Hodges / The Detroit News)

Also worth a look is “The Robin,” a particularly handsome study in form and color where the contrast between the bird’s orange breast and inky black shadow below makes the piece pop off the wall.

Mitchnick also gives us some interesting detours into whimsy. Her paired “Quotation Paintings” have gridworks of amusingly unrelated objects — an oddball mash-up of small brooches, broken branches and what appear to be parts of the human intestinal system.

Finally, dominating one end of the gallery is Mitchnick’s two-canvas work, “Mimi and Nancy from Another Planet,” with its two female subjects rendered as heroic busts on columns, set in an odd, Eden-like landscape that also includes miniatures of other paintings by the artist.

One of them, floating above one of the women like a square halo, is a copy of “Torn Orange” — a completely unexpected touch that in this case, at least, manages to make perfect sense.