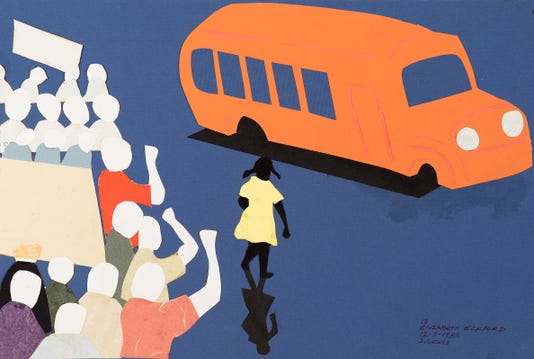 "Elizabeth Eckford" was one of the Little Rock 9, who in 1957 braved angry protesters to enter Little Rock Central High School.(Photo: Olayami Dabls, )

If you haven't been to the Fisher Building lately, the installation of "Olayami Dabls: Absorb, Reflect, Transmit" gives you a great reason to revisit the storied Art Deco skyscraper.

Nineteen paper cut-out "paintings" by artist Dabls documenting key moments in the civil rights movement from 1955-1965 have been scanned and blown up huge, completely filling the illuminated glass vitrines that line the ground floor of the Fisher arcade.

"I was blown away by Dabls' cutouts not just because of their beauty," said Everard Findlay, chief innovation officer for the building's owner, The Platform, who curated the show, "but also because of their simplicity and use of color."

Findlay got the inspiration for the exhibit after seeing Dabls' "The Story of Our Rights: How a Nation Moved Towards Social Justice." This handsome 2018 paperback, edited by Leila Hamidi and Corazon del Sol, reprints 42 of the original cutouts.

"These works belong in the Smithsonian," said del Sol, a Los Angeles conceptual artist who befriended Dabls five years ago while in Detroit, and was moved to pull together a comprehensive catalog of his work. "Everyone needs to see these."

The images include hooded Klansmen and a burning cross, a lunch counter protest, and scary profiles of three hungry-looking police dogs — as well as hopeful scenes of interracial cooperation.

Del Sol found the original cutouts, which are 11-inches-by-17 inches, while rooting through a pile of water-damaged work in the basement at Dabls' African Bead Museum on Grand River.

But the civil-rights series, wrapped in plastic, was undamaged.

"Literally, as I was opening them, I was crying," del Sol said. "Some people call this 'folk art,' but these are masterpieces." 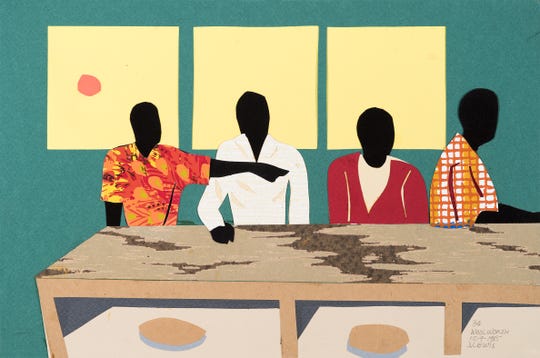 Dabls, a "visual storyteller" and 2011 Kresge Artist Fellow, is most famous around Detroit as the founder and curator of the Bead Museum, with its 18 outdoor, eye-popping installations.

Few, however, likely remember that Dabls was a curator and artist-in-residence at the city's former African American History Museum from 1975-1985, before construction of the current Wright Museum.

Dabls said he used to lecture at the old museum on civil rights, often using photographs to illustrate his points, but found that graphic depictions of violence upset little kids.

"I could tell the children didn't like the real graphics," he said recently at the Fisher Building, "so I needed a way to talk about that period while softening some of the negativity."

The Dabls show is the fifth that Findlay has curated for the Fisher Building lobby, an ongoing enterprise called the Beacon Project that rotates shows through the handsomely restored vitrines.

(The Fisher's spectacularly painted ceilings, by the way, have also been meticulously cleaned and restored to their original glory — fixing patches of water damage that had built up before The Platform acquired the building.)

Apart from a 2016 show in Los Angeles that del Sol helped organize, Dabls' striking cutouts haven't been seen for over 20 years — making the current exhibition a particularly rare and valuable event.