Last year it was la belle France; this year, the good old USA. 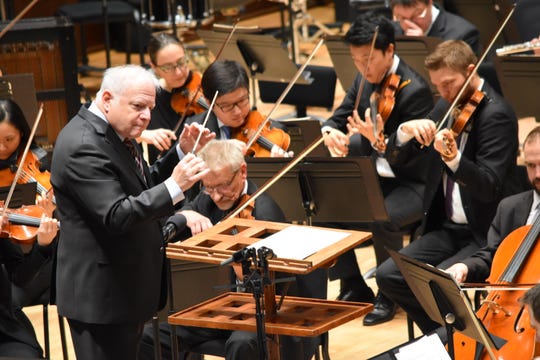 Fittingly, the Feb. 8 symphonic opener comprises a patriotic hymnal that even Laura Ingalls Wilder could get behind — with Joan Tower's "Sequoia," Ferde Grofé's "Grand Canyon Suite" and Virgil Thomson's suite from  "The Plow That Broke the Plains."

In many ways, suggested DSO Music Director Laureate Leonard Slatkin, who will be conducting all Orchestra Hall performances, the opener constitutes "a little portrait of parts of America."

Tower, the composer behind "Sequoia," was one of the first women to really make it big in classical-music composition, Slatkin said. "And 'Sequoia' was the piece that really did it for her. She must be 81 by now," he added, "and I think she's coming out for the concert."

By contrast, "Grand Canyon Suite" is a story of musical rise and fall.

"This piece was so popular when it was written in the '30s," Slatkin said, "and for decades after everyone played it. It was part of advertising jingles and the American consciousness. The 'On the Trail' movement was used in Phillip Morris commercials."

But today? "It’s hardly played at all," he said. "It's very descriptive music, with a wind machine and a big thunderclap. It's eminently enjoyable, though even I haven’t done it for 25 or 30 years."

This year is also is the 100th anniversary of composer Leonard Bernstein's birth, so closing each of the six programs will be one of his works. With the opener, the Bernstein selection will be Three Meditations from his "Mass," featuring DSO Principal Cello Wei Yu.

"Bernstein wrote the 'Mass' for the opening of the Kennedy Center in 1971," Slatkin said. "All the luminaries came — Jackie Kennedy and everybody. It was easily Bernstein's most controversial work," he added, describing it as a complex interweaving of music and text in which the "West Side Story" composer wrestled with his own spiritual demons.

The audience was supposed to hold hands at the very end, but Slatkin promises there'll be none of that.

The Meditations, he explained, were written specifically for cello virtuoso Mstislav Rostropovich, whom Bernstein knew well. "The Three Meditations will just be about the music," Slatkin said, "without text or philosophic ideas. They’re lovely pieces, and a fine addition to the cello repertoire."

On Feb. 9-10, the orchestra will host "A John Williams Celebration," featuring symphonic and film music by the famous composer. The program includes his "Liberty Fanfare," Concerto for Oboe, and a selection of movie scores from, among others, "Jaws," "Raiders of the Lost Ark" and "Harry Potter and the Sorcerer's Stone."

Subsequent symphonic performances will include Gershwin's "Porgy and Bess" (Feb. 16-17), a program built in part around "West Side Story" (Feb. 21-22), and the concluding "Maximal Minimal" (Feb. 23-24) with "Clapping Music" by Steve Reich and Philip Glass' Concerto Fantasy for Two Timpanists and Orchestra.

Scattered throughout the three weeks will be special programs in The Cube at the Max M. and Marjorie S. Fisher Music Center. Highlights include Tuesday's "Kaki King + Strings," featuring the guitarist and composer with a DSO string ensemble.

Film buffs won't want to miss the Feb. 7 screening of the 1946 "Beast with Five Fingers," which, amusingly, follows the severed walking hand of a very-dead concert pianist playing the left-hand part of the Bach Chaconne.

"The protagonist, not seen on screen apart from his hand, is actually my Uncle Victor, playing the piano part," said Slatkin, who will host the screening.

"I always talk about my mother and father," he added, both of whom were musicians in Hollywood, "and I very seldom get the chance to talk about uncle — a staff pianist for Warner Brothers. If there’s a pianist in any Warner film from the 1940s or '50s," Slatkin said, "it’s my uncle. And if there are hands on screen, they’re his."