The trippiest experience currently on tap in Detroit is the virtual-reality video at Detroit's Library Street Collective, part of "Manifest Destiny," up through Oct. 5. 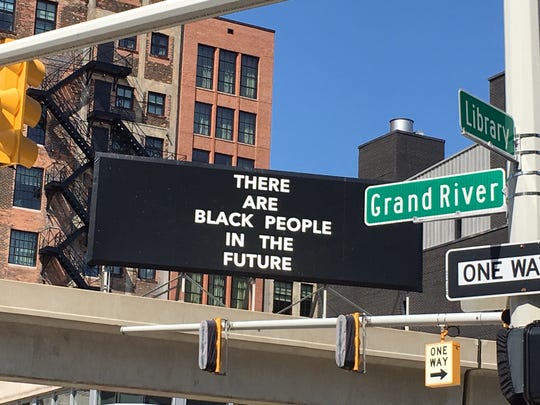 The trippiest experience currently on tap in Detroit is the virtual-reality video at Detroit's Library Street Collective, part of "Manifest Destiny," up through Oct. 5.

Sit down, strap on the headset for "NeuroSpeculative AfroFeminism," and prepare to be dazzled.

"We're in a black hair salon," explained exhibition curator Ingrid LaFleur, "and getting our brain optimized." The goal is to liberate it from all cultural oppression, particularly that of the racial sort.

Created by the all-women international collective Hyphen-Labs, the project showed at both the Sundance  and Tribeca film festivals, and it's easy to see why. This part-serious, part-playful five-minute immersive exercise is gorgeous and just this side of overwhelming.

It's the emotional high point of a wide-ranging show in which artists both local and national explore AfroFuturism, the pop culture mash-up of technology, science and philosophy that also animated the 2018 film "Black Panther."

"AfroFuturism," said LaFleur, "allows you to move past old systems of victimization," and efforts by the dominant culture to erase or otherwise nullify black people.

Confronting that concern head on, a crisp black-and-white billboard atop a building outside the gallery baldly asserts: "There are black people in the future."

That's the creation of Pittsburgh artist Alisha B. Wormsley, who also installed a linear photo essay within the gallery titled "The Space I Am In: Oracle." Lining both sides of a narrow hallway, "Oracle" consists of color pictures of the artist's friends and family, shot in the city's Homewood neighborhood. 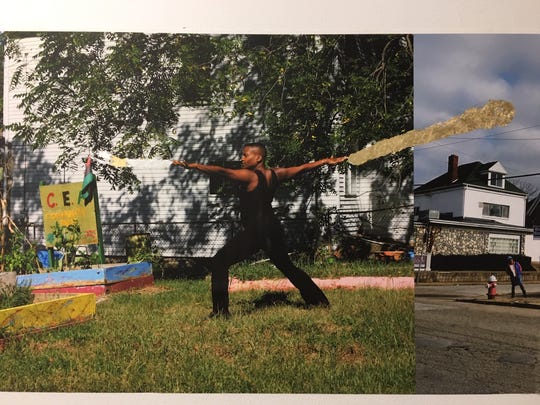 But there's something other-worldly going on. Shiny, metallic streaks shoot out from one man's hands like superpower rays, while another portrait features a bearded fellow in a white dress, with rays arcing up to heaven from his temples.

"When Alisha took the pictures," LaFleur said, "she saw magic, and represented that by metal leaf applique."

The gallery's back room features densely textured collages by Brooklynite and Detroit native Jasmine Murrell. These contain specific Detroit references, as well as the hands of the elderly.

"Jasmine's obsessed with hands," LaFleur said, "as well as ageing, the body and wisdom." 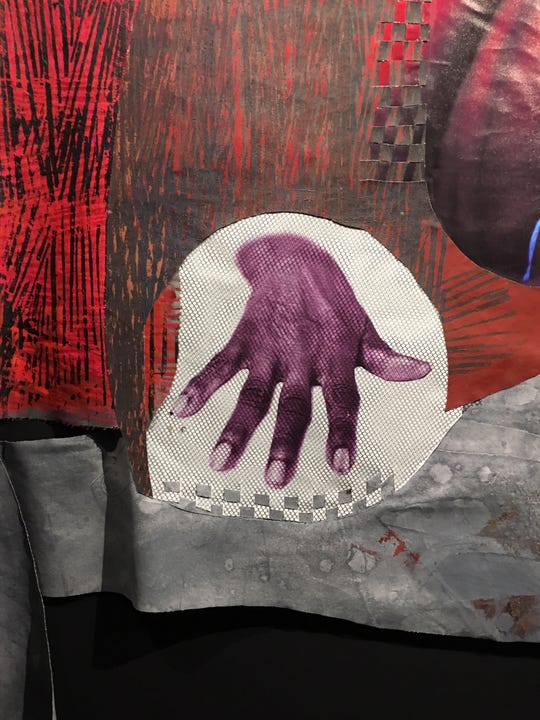 Detroit native Jasmine Murrell's collages at Library Street Collective focus in part on the hands of the elderly, and the wisdom they hold. (Photo: Michael H. Hodges / Detroit News)

While you're back there, don't miss the intriguing green sculptures and video by Seattle's Maikoiyo Alley-Barnes.

And if it's a nice day, walk through the large glass doors into The Belt alleyway, where you'll find the series of large graphics, "Digitalia."

Download the app specified on the exhibition labels, point your phone at the artwork, and enjoy a short burst of augmented reality on the screen.