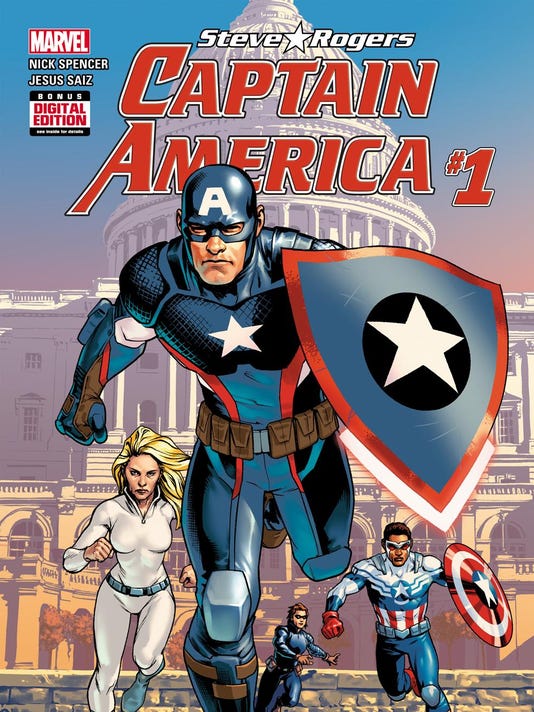 Washington — Two words no one ever expected Captain America to say? “Hail Hydra.”

The new “Captain America: Steve Rogers #1” comic book hits stands Wednesday featuring the return of the original Captain America, Steve Rogers, but with a shocking twist: in the final pages Rogers throws a fellow hero out of a plane to his death and says “Hail Hydra,” the salute of the longtime Marvel Comics terrorist group Hydra.

The patriotic hero’s apparent heel turn, following months of sitting on the sidelines, is the highlight of the new No. 1 issue written by Nick Spencer and drawn by Jesus Saiz, and the book’s editor, Tom Brevoort, wants people to know they aren’t falling back on any of the old comic-book switcheroos — a clone, a life model decoy or a Steve Rogers from another dimension — for this reveal.

Some fans want Captain America to have a boyfriend

“That’s the real dude, and you’ll find out the whys and wherefores in the second issue,” Brevoort said.

Captain America has always reflected the era he’s lived in, and adding this level of complexity to Steve Rogers’ character just reflects where we are as a country, Brevoort said.

“In the zeitgeist of the moment that we’re in, in the middle of sort of a very volatile election cycle where there’s a lot of strange things going on in the world of politics, and the world and the country, it feels kind of appropriate, kind of right timing-wise, that you could get a revelation like this and it not feel out of step with where the nation happens to be in the moment,” he said.

“Twenty-four hours ago people were asking the question of ‘Steve is back. Why do you need Sam Wilson? When is he going to go back to being the Falcon?’” Brevoort laughed. “And suddenly today, 24 hours later, people kind of go, ‘Oh, now I see something that I didn’t see before.’ And now suddenly there is an interesting friction between these two titles.”

Any change in Captain America always brings controversy, and Internet leaks meant hate email from irate fans has already started, he said. “It speaks both to the strong connection that people have for Steve Rogers as an individual or even Captain America as an idea,” he said.

Captain America is “not just another superhero. He wears the colors of the nation and he’s meant to represent and reflect what the national dialogue is at any given point,” Brevoort said.