How West Point lifted up a young black man

Clifford Worthy has penned a memoir, "The Black Knight," about how West Point lifted up a young black man.

How West Point lifted up a young black man 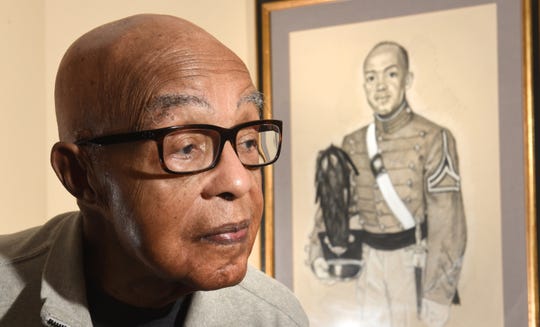 Clifford Worthy stands next to a drawing taken from a 1953 photograph, when he was a West Point cadet. (Photo: Max Ortiz, The Detroit News)

He licked the three-cent stamp and mailed the letter, never expecting it to go anywhere. Against all odds, it did — and revolutionized the young man's life.

When Rep. John Dingell Sr. — father to the former congressman who just died — got Clifford Worthy's 1946 request for nomination to West Point, he wrote the student enrolled in what was then called "Wayne University" right back. 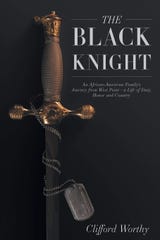 The response arrived in an official congressional envelope.

"I hadn’t even told my mother about it," said Worthy, who just published his autobiography, "The Black Knight: An African-American Family's Journey from West Point — a Life of Duty, Honor and Country" (Front Edge Publishing).

He smiled. "She thought I was in trouble."

But he wasn't, and three years later found himself enrolled at the military academy — the first step in a distinguished career that took Worthy to Germany, Vietnam, and some of the highest offices in the Pentagon.

"It was," he said, chatting in the handsome Bloomfield Hills apartment he shares with his wife Mildred, "an opportunity that was thrust on me."

Ask the 90-year-old, whose daughter Kym is Wayne County Prosecutor, how long he worked on the book, and he'll tell you, "about 35 years."

"I was in the Army when I started it," he said, "and we moved around a lot. I’d work on it, put it away for a couple years, and then pick it back up."

Clifford Worthy as a West Point cadet in a 1953 photo. (Photo: Max Ortiz, The Detroit News)

Worthy entered West Point just a few years after President Harry Truman desegregated the Armed Forces, but he was by no means the first African-American to win admittance. The very first black graduate was Henry Ossian Flipper in 1877.

But African-Americans were few in 1949 — indeed, Worthy said there were just three in his class.

As it happens, the Detroiter ended up loving the school perched high on the bluffs above the Hudson River.

"In my four years," Worthy said, "I can't really think of any time I was singled out for negative treatment."

The work is as much family memoir as an accounting of Worthy's rise through the military, and how he ultimately landed at General Motors, where he sat on the committee that made recall decisions.

"The book got started because my son Mark, who died about four years ago, was a special-needs child," Worthy said. "There was quite a story to being in the military and looking for help. But as I got into the book, it became more of a family and career story."

He added, "The best diagnosis I ever got was that Mark was injured from lack of oxygen at birth."

The book details the anguish suffered by Worthy and his first wife, Lillian, who died in 1975, as they tried to manage a disruptive child in an era with little knowledge and even fewer resources.

"There were some heartbreaking encounters," Worthy said. "Mark would get out of hand. He was hard to control. Finally," he added, "a top doctor in Heidelberg, Germany, said we should just let him play out whatever rage he had."

Eventually, the couple were able to place Mark in a Texas facility for children with behavioral problems run by the Devereaux Foundation.

"Mark loved his time there," Worthy said. "He was in their ranch program. He liked to do the hard work. That was the longest he was ever away from home."

Inevitably, of course, a child with extraordinary needs takes time away from the other children in the family, both Kym and her younger sister Jennifer.

"Kym was able to take care of herself pretty much," Worthy said. "I don't know if she sensed she had to do that, since we probably spent more time with Mark and less with her than we should have. But I think that's why she grew up to be very positive and aggressive."

He laughed. "The best way you could get Kym to do something," he said, "was to tell her she couldn't do it."

In the book's preface, Kym admitted that as a youngster, she was "clueless about just how extraordinary my parents really were." But if you read "The Black Knight" from start to finish, she added, you'll come away with "a great portrait of what a real American hero looks like."