The magical author introduces "Harry Potter: A Journey Through…" a non-fiction eBook series 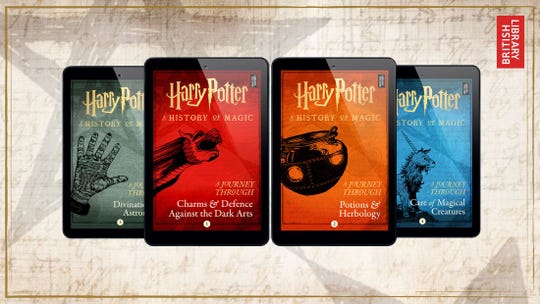 The non-fiction short-form eBooks are to be released starting June 27 (Photo: Pottermore)

Apparating into J.K Rowling's mind to learn more on the magic at the heart of her bewitching "Harry Potter" series just got easier.

Pottermore Publishing announced Rowling is releasing a series of non-fiction eBook shorts called "Harry Potter: A Journey Through..." next month.

The series is adapted from the 2017 audiobook "Harry Potter: A History of Magic" – inspired by the British Library exhibition of the same name.

Potterheads can prepare to delve deeper into the rich history with the four bite-size reads, each themed by Hogwarts lessons.

The books will take readers back once again to learn about the traditional folklore and magic at the heart of the "boy who lived" stories, accompanied by some new drawings from London-based artist Rohan Daniel Eason.

"These eBook shorts are adapted from the audiobook and are a chance to absorb the colorful characters and curious incidents of the real history of magic in a more compact form – perfect for the train or whatever Muggle transport you prefer," Pottermore officials said.

The eBooks to look forward to are:

In "A Journey Through Charms and Defence Against the Dark Arts," readers learn how to become invisible, to make someone fall in love with them, to transform into another creature: "these are all things that people have believed in, yearned for, or feared, throughout history," publishers say.

"Spells and charms have captured the imagination for hundreds of years," according to the synopsis. "Warding off evil is also something that has concerned people throughout history. From werewolves to all manner of snakes in the wizarding world, you’d learn how to face a number of strange and frightening forces in Defence Against the Dark Arts classes."

The eBook series will also feature notes, manuscript pages and sketches as previously published in the "Harry Potter: A History of Magic."

The first pair, themed on Charms and Defence Against the Dark Arts, and Potions and Herbology, are set to release June 27, while the others will follow soon after, officials said.

Since the 2007 publication of "Harry Potter and the Deathly Hallows," the final novel in the original series, Rowling has been gradually expanding the Wizarding World.

Fans scope through the Pottermore website, which is full of supplementary reading materials. Major additions including the play "Harry Potter and the Cursed Child," and the movie prequel series "Fantastic Beasts," have also added to the story.

The eBooks will launch in English, French, Italian and German initially, and are available to pre-order at Amazon US, Apple and Kobo.