“We’re Better Than This: My Fight for the Future of Our Democracy” comes out June 30

New York – A book by Rep. Elijah Cummings, nearly finished in his lifetime and worked on by his widow after his death, will be published this summer.

Harper, an imprint of HarperCollins Publishers, announced Friday that “We’re Better Than This: My Fight for the Future of Our Democracy” comes out June 30. According to the publisher, Cummings “powerfully weaves together the urgent drama of modern-day politics and the defining stories from his past.” 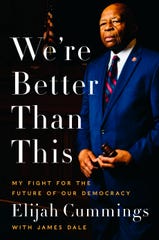 "We're Better Than This: My Fight for the Future of Our Democracy," by Elijah Cummings with James Dale. (Photo: Harper)

“He offers a unique perspective on how his upbringing as the son of sharecroppers in a South Baltimore neighborhood, rampant with racism and poverty, laid the foundation of a life spent fighting for justice,” Harper announced.

“Part memoir, part call-to-action, the book goes behind the scenes with the House Democratic leadership, offering an eye-opening account of the grim realities of holding the Trump administration to account.”

Cummings’ book was completed by his widow, Maya Rockeymoore Cummings, and by co-author James Dale.

“Elijah and I discussed this book for a long time,” Ms. Cummings said in a statement to The Associated Press issued through her publisher. “He had many stories from his life he wanted to share because he wanted to encourage young people to overcome obstacles and strive toward their goals. This book is for the ages and the moment. Elijah’s fierce defense of our democracy was tied to his total certainty that without it, freedom and opportunity for all would be impossible.”

Ms. Cummings is running for the seat left open by her husband’s death. A Democratic Party primary is scheduled for Feb. 4.

Elijah Cummings, who died last October at age 68, served in Congress for 23 years and was chair of the Committee on Oversight and Reform at the time of his death. The book’s title is a variation of one of his favorite expressions, used notably during his closing remarks at a February 2019 hearing with Michael Cohen, the former lawyer for Donald Trump. The president had called Cohen “a rat” for testifying against Trump.

“And so, the president called you a rat,” Cummings said. “We’re better than that! We really are. And I’m hoping that all of us can get back to this democracy that we want and that we should be passing on to our children so they can do better than what we did.”