Movie review: 2 new films show you can’t judge a movie by its cast

Movie review: 2 new films show you can’t judge a movie by its cast 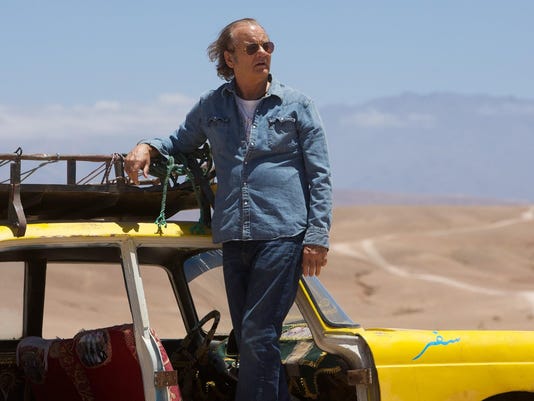 Proof positive of this truism arrives this week in the form of two films — one mainstream, one obscure — which squander the substantial talents of their casts on meandering, overcooked stories that suffer from lackluster and often aimless direction. Each serves as an example of why the star system continues to wane in Hollywood: Because no star is so charismatic or gifted that they can completely elevate low material.

And that includes Bill Murray, one of the most beloved and funny people in show business. Beloved he may be, but his last two feature roles were in the dismal “Aloha” and corny “St. Vincent.” Now he goes for the hat trick with the scattershot “Rock the Kasbah.” Somebody find this man a better script reader.

Zooey Deschanel, you think: Well she’s pretty good. And yes she is, except she disappears almost immediately. Directed by the once-reliable Barry Levinson and written by Mitch Glazer, “Rock the Kasbah” tosses characters in and out of the film with random abandon. Danny McBride and Scott Caan are key characters and then they’re gone. Bruce Willis is in the game as a tough mercenary, then he’s gone, then he’s back in.

Ultimately — and it takes a while to get here — Richie finds himself in a small Afghan village at night where he magically hears singing coming from a cave (the Afghan people apparently have a national hearing impairment problem since none of them have ever noticed this singing). Richie discovers a young girl (Leem Lubany) singing Cat Stevens songs.

He decides to get rich by putting her on “Afghan Star,” the Afghan equivalent of “American Idol.” Only one problem: Afghan women aren’t supposed to sing, especially not on TV.

Richie’s eventual ally in pulling this off is a happy hooker name Merci, who also becomes Richie’s love interest. Merci is played by the ridiculously beautiful Kate Hudson, who is 36; Murray is 65. Geez, Hollywood.

“Rock the Kasbah” is bad; “Bone Tomahawk” manages to be worse. And again the cast looks promising. The setting is the Wild West, where innocent folks from a pioneer town have been kidnapped by cannibalistic, cave-dwelling Native Americans.

In the Old West, a sheriff , his deputy, a gunslinger,and a cowboy embark on a mission to rescue three people from a savage group of cave dwellers in “Bone Tomahawk.” (Photo: RLJ Entertainment)

Setting out to rescue them is the town sheriff (the veteran Kurt Russell, soon to be seen in Quentin Tarantino’s “The Hateful Eight”), the injured husband of one of the victims (Patrick Wilson, currently rocking TV’s “Fargo”), a dude gunman (“Lost” star Matthew Fox) and the sheriff’s elderly deputy (Oscar nominee and Emmy winner Richard Jenkins).

So, four guys ride off to save the day, right? Should be pretty straightforward. Except first-time director and writer S. Craig Zahler seems to be shooting for some sort of “Lonesome Dove”/“Django Unchained” hybrid epic and he leisurely drags the film out to 132 minutes with nothing much happening until the final half hour or so, which turns into a horrorshow gore fest.

The bottom line is you can’t blame the actors; they have no idea how a movie’s going to turn out while they’re shooting it (although it is hard to believe that either of these scripts were seriously compelling on the page). The final success of a film is decided by the writers and directors. But at the same time that they can’t be blamed, the actors can’t be trusted either. A pretty or familiar or appealing face does not a good movie make.

Rated R for language including sexual references, some drug use and brief violence