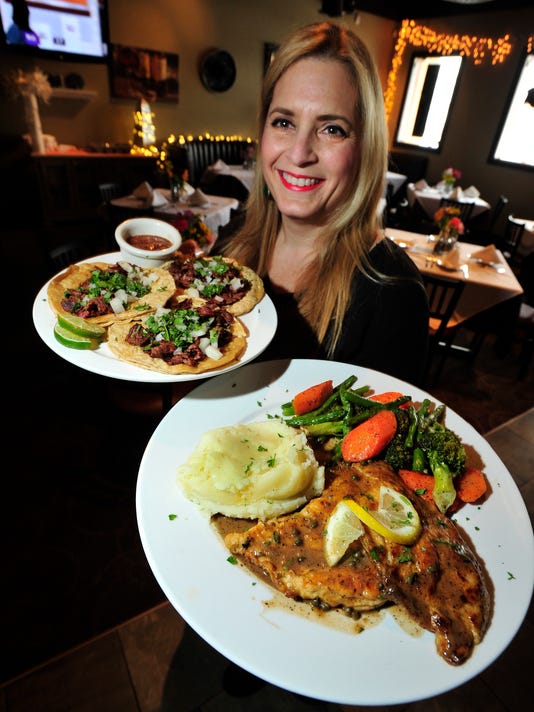 ABOVE: Owner and chef Lisa Santori of Ciao Bella Ristorante shows of some dishes of steak fajita tacos with homemade salsa and chicken lemon with a caper wine sauce, mashed potatoes and a vegetable medley.(Photo: Photos by Daniel Mears / The Detroit News)Buy Photo

Not every intriguing new restaurant hits the scene with a PR splash in a trendy neighborhood. And that makes them even more intriguing. On a stretch of Northline Road that is more of a thoroughfare to I-75 than an entertainment destination, Ciao Bella, an Italian/Mexican spot in a modest little one-story building, doesn't give away its secrets from the exterior.

Once inside, however, it's immediately evident that it is more than routine. The bouquets of fresh flowers on each white linen covered table, for instance. The sincere friendliness of the staff. The strings of sparkling lights festooned around a row of banquettes — more luxurious than booths — on one wall. The interesting all-day menu that offers a few Mexican dishes, along with Italian.

It's not a fancy restaurant, despite the extras. The one-room spot with its eight-seat bar and kitchen visible in the rear is unpretentious and casual, but the standards are high. Co-proprietor and head chef Lisa Santori has given the space a distinct personality that sets it apart, and a menu that combines her heritage with that of her former Mexican in-laws. It all comes naturally to her as the daughter of Modesta DeVita, whose Ristorante di Modesta in Southfield (now the location of Bacco, which took over in 2002) was a popular destination in the '80s and '90s and is still remembered fondly.

Ask Santori which recipes are her mother's, and she answers "all of them," from the stuffed eggplant on the appetizer list to entrees including lasagna made with fresh noodles and meat sauce; chicken rolled in cannelloni and baked with tomato sauce and cheese; fettuccine Bolognese; and the many nice little touches, including rounds of parsley-sprinkled garlic bread and the fresh seasonal vegetables that accompany the entrees.

Chicken Milanese is not just a pretty dish with its sprinkling of arugula, colorful vegetables and golden brown, lightly breaded chicken breast on a big dinner plate; it's expertly done. Accompaniments to this dish and other nonpasta dishes include a choice of pasta or potato.

Modesta's influence doesn't extend to the smaller Mexican side of the menu, which offers its own appealing fare, including street-style open-face tacos filled with chicken, steak or shrimp and topped with fresh cilantro and onion, along with rice and beans, a sturdy salsa and made-to-order guacamole. Fajitas with the same choices come on a still-sizzling skillet and the other main Mexican selection is chicken flautas. Desserts are housemade and include cannoli, as well as flan.

Ciao Bella has a nice little wine list to accompany the fare, as well as a selection of 20 beers, with four on tap. Soon a pizza oven will replace one of the television sets in the room, and that comes naturally, too. Santori's father was a pizza maker and she has a pizza oven in her backyard.