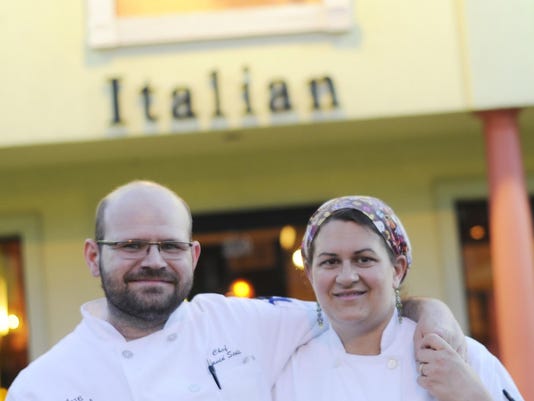 Due Venti chefs and owners David and Nicole Seals have improved the restaurant over the years.(Photo: Elizabeth Conley)

The first time I reviewed Due Venti, the restaurant named for its address on South Main Street in Clawson, it was less than a year old, in August of 2008. The true bistro — run by a husband/wife team in the kitchen — was good then, three stars worth, but it's much better now.

Proprietors Nicole Pichan-Seals and David Seals have improved upon just about everything in the small spot that seats just 50 at linen-covered tables indoors and 16 more on its umbrella-shaded patio.

The restaurant was inspired by their mutual love of Northern Italian fare — the region said to be the 220 mile stretch from Rome to the east coast of the Adriatic Sea, fitting in nicely with their name — and also by the art legacy of Nicole's grandmother, the late Eva Cafini-Theodoroff, whose paintings adorn the walls, now soft off-white, rather than the original yellow.

The change is subtle, just like everything about the restaurant. This is a place that has the confidence to be low-key and to let the fare — and the much improved wine list — speak for itself.

The menu changes with the seasons, but it's a gradual change, not a complete rewrite. As fresh, seasonal products become available, they segue onto the bill of fare, which is admirably brief any time of year and is free of cliché dishes.

Antipasti include sfoglia di pane, oven-baked flatbread topped with paper-thin slices of potato, fontina cheese and some wonderfully flavorful speck — premium smoked prosciutto. A sprinkling of arugula and a splash of herb oil finish off the dish, which pairs nicely with a glass of Prosecco to begin the meal.

Another appealing appetizer has been on the menu since day one. It is fritelle, a cauliflower fritter with tomato caponata and garlic-herb aioli, another legacy from Nicole's artist grandmother. Those who like to share may choose a selection of cheeses, artfully served with cherries soaked in wine and a honeycomb, or the platter of cured meats with house-pickled vegetables and whole grain mustard.

There are just six choices on the entrée — or, more properly, the piatti principali list — including a tomahawk pork chop, a beautiful plate colorfully done up with farro pilaf, roasted red pepper, balsamic onions and arugula. But the show-stopper just might be the ragu di coniglio, a stew of rabbit, fennel, carrots, raisins and wine over sliced crepes seasoned with thyme and orange zest and a finishing touch of truffled pecorino cheese.

The accompanying breads change too, and are housemade like everything else, including the lovely, and equally Italian, desserts, ranging from cookies, caramels, and chocolates to the wonderful affogato, mascarpone vanilla gelato topped with hot espresso. Other available gelati and sorbetti include such flavors as hibiscus, grapefruit-basil and caramel. 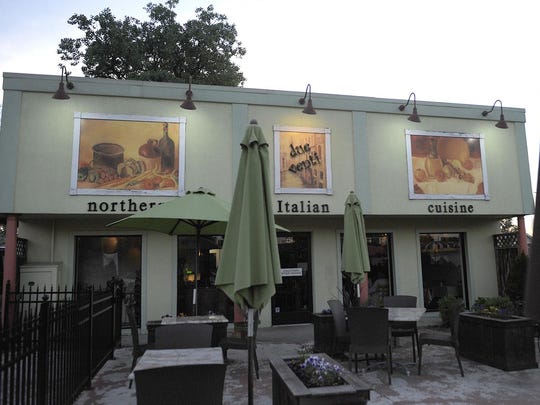 The outdoor patio of Due Venti in Clawson seats 16, but 50 more may eat at the linen-covered tables inside. (Photo: Photos by Elizabeth Conley / The Detroit News)

Of course, it wouldn't be possible to present this kind of food without help. Rita Stephenson is the sous-chef, and Jeffery Pyke, the wine director, working on his master sommelier certification, also oversees the dining room and a staff of, need I say, well-dressed professional servers.

Due Venti isn't flashy or exciting. It is charmingly low-key, unpretentious and just might surprise you with the quality of its hand-crafted fare.

Liquor: Full bar (with service from behind the scenes).